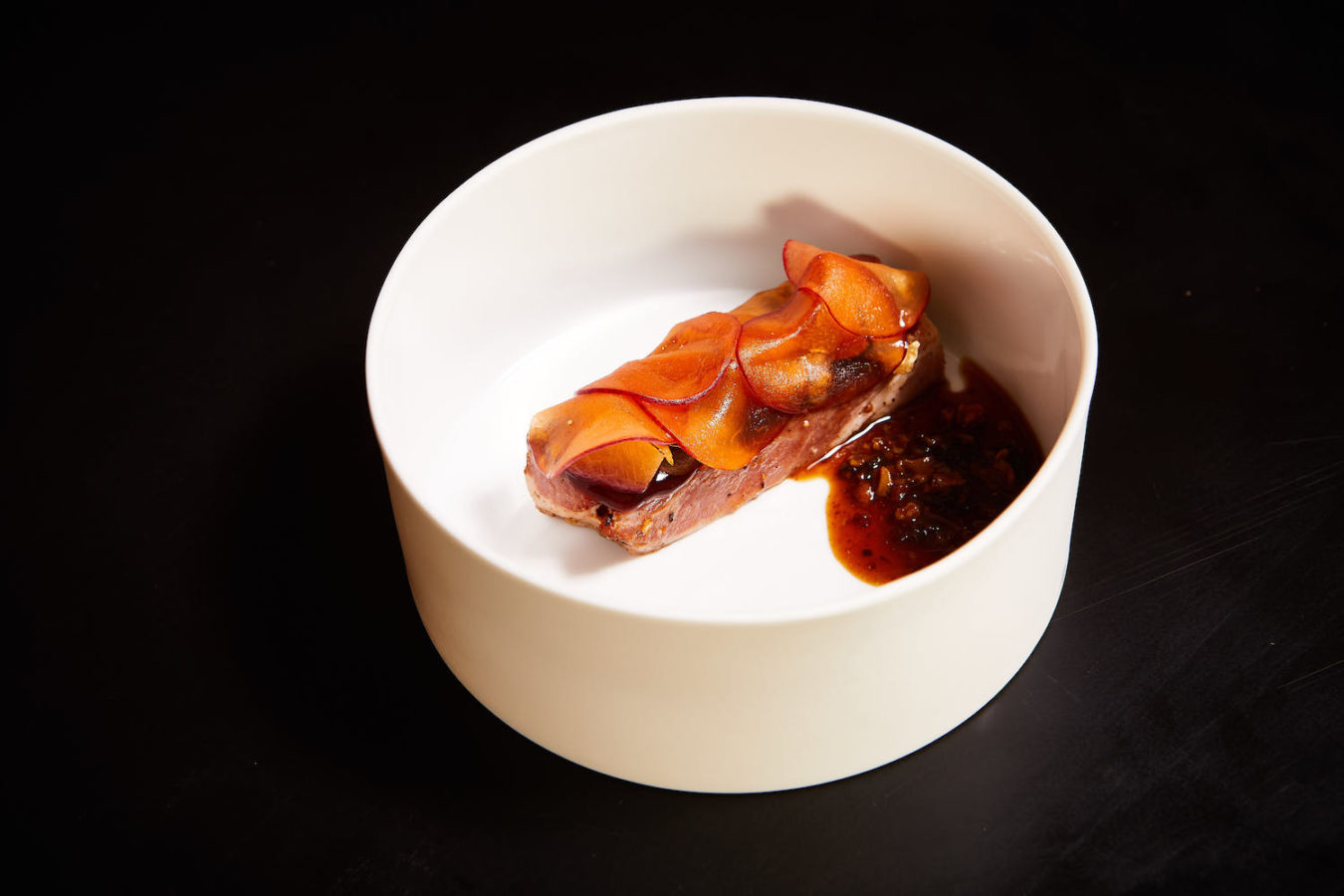 This month sees a pair of highly anticipated restaurants finally opening their doors, but there are plenty of other new eateries worth keeping an eye on as well

When two fine dining venues that both boast the input of three-Michelin-starred chefs launch in the same month (pretty much on the same week, in fact), you know that you’re living in a city with an incredibly vibrant culinary scene. Such is the case in Bangkok this October, as both Côte and IGNIV officially open their doors, inviting discerning diners to indulge in some world-class gourmet feasting. However, if you’re one who waits for the dust to settle before trying the flashy “new kid on the block” when it comes to restaurants, then check out some of the less headline-hogging – but equally delectable – restos that have sprung up on the local foodie scene recently.

Bangkok’s legions of dedicated foodies have been anxiously awaiting the opening of the luxurious new riverfront Capella Hotel and Resort, Bangkok, as it also means the opening of Côte, the property’s signature fine dining restaurant. The concept and menu here are both courtesy of the Italian-Argentinian superstar chef Mauro Colagreco, the man behind the three-Michelin-starred Mirazur (which also topped the World’s 50 Best Restaurants list). Expect contemporary reinterpretations of traditional recipes that showcase the culinary heritage of the French and Italian riviera, with produce that is sourced daily. Along with the nine-course ‘Carte Blanche’ dinner experience there are pre-dinner small tasting plates in the show kitchen, accompanied by champagne cocktails, and after-dinner aperitifs at the Green House, home to the hotel’s organic herb garden. For this collaboration, Chef Mauro worked closely with Capella Bangkok’s own culinary team of Executive Chef Anthony Scholtmeyer, Chef de Cuisine Marc Vasseur, and Chef at Côte Davide Garavaglia – a former Chef de Cuisine of Mirazur – to create unforgettable dishes (hint: try the quail with black trumpet mushrooms and foie gras stuffing, beetroot, and radicchio)

Following on the success of the IGNIV restaurants in Switzerland – two of which have been awarded two Michelin stars – the new IGNIV at The St. Regis Bangkok is Chef Andreas Caminada’s first foray outside of his native Switzerland. The restaurant’s name means “nest” in the chef’s mother tongue (Romansh, a language only spoken in the mountainous southeast of Switzerland) and the lavish interior design comes courtesy of acclaimed Spanish interior designer Patricia Urquiola. The kitchen team in Bangkok will be led by Head Chef David Hartwig, a longtime collaborator of Chef Andreas, with Sous Chef and Pastry Chef Arne Riehn in charge of the tempting range of unlimited post-dessert delights. As for what’s on the menu, for starters we loved the toasted almonds coated in foie gras and rolled in beet powder, and the duck liver terrine with a middle of foie gras, all capped by a mandarin gel and yoghurt foam (eaten with a warm brioche fresh out of Chef Arne’s oven). Other highlights include: grilled Hamachi – smoked tableside – with a crust of crushed black pepper; beef short ribs served with celeriac mash garnished with bits of caramelised onion; and the butternut squash which is puréed, finely diced, and roasted, tied together by an ethereal Hollandaise espuma.

When you have the kind of reputation that chef David Thompson has, any new project attracts loads of attention. Best remembered as the creative force behind the original award-winning Nahm restaurant, he since has gone on to spearhead many culinary projects. In 2019 he opened Long Dtai at the lavish Cape Fahn hotel in Koh Samui, but now this gregarious gourmet has returned to Bangkok to man the kitchen at Aksorn, an intimate 40-seat restaurant that occupies the top floor of the recently opened Central: The Original Store shopping boutique on Charoenkrung Road. The chef’s inventive and regularly changing multi-course tasting menu will take its inspiration from a collection of vintage cookbooks published decades ago (circa late 1940s to early 1970s). Expect mouth-watering rustic Thai dishes such as: smoked catfish wrapped in wild tea leaves; seasoned river prawns with pickled garlic and kaffir lime; red curry beef with peanuts, Asian citron, and pickled shallots; and braised marble goby fish with wild ginger.

It’s well worth the trip to Old Town to check out Jam Jam Eatery & Bar, a casual but stylish lounge and restaurant located on the 4th floor of the recently opened Asai Chinatown Bangkok hotel. This all-day dining spot features an eclectic menu created in collaboration with Paolo Vitaletti and Jarrett Wrisley of Appia, Peppina, and Soul Food Mahanakorn fame. It offers yummy local and international comfort food favourites, served with no shortage of creative twists (quinoa grapow anyone?) and plenty of greens for health-minded diners. For breakfast or brunch, tuck into fluffy housemade pancakes with fruit, or opt for the Chinatown Benedict, which sees eggs benny topped with sugarcane smoked duck. From the sharing plates menu, try the Berutti, a combo of crisp flatbread, hummus, and tabbouleh salad. For dinner don’t miss the cacao-braised pork belly, made using chocolate from local producers Kad Kokoa, and afterwards be sure to indulge in a few flashy signature cocktails from the well-stocked bar.

Leon by Cocotte is the third outlet from the Cocotte group to open its doors within the confines of EmQuartier mall, joining Mozza and Victoria. At Leon, the rustic-yet-modern interior design comes courtesy of Paradigm shift (the creative studio behind Stage, Caper, Cadence, Crimson Room, and Maze), while the menu dreamt up by Head Chef Jeriko Van Der Wolf can only be described as “rich”. Choose from generously marbled dry-aged meats, grilled bone marrow topped with beef cheek, Black Angus tomahawk steaks, or the signature Leon foie gras burger, which combines a Wagyu beef patty with foie gras cream, cheese, onion compote, pan-seared foie gras, rocket leaves, and balsamic caramel. To accompany, keep heading down the road of decadence with a side of truffle cheese fries, or go slightly green with an avocado salad made with corn, rocket, tomato, pumpkin seeds, and rye bread. And be sure to check out the nicely curated wine and imported beer selection.

Sathorn Soi 10 may be one of Bangkok’s shortest streets, but it’s packed with amazing, often exceedingly quirky, dining and drinking options. The latest venue to open there is Bardo Social Bistro and Bar, which has taken over the spot formerly occupied by Marcel’s. The intimate, art-filled interior – which boasts a remarkable collection of Kostar’s pop/urban art – is a tad narrow, and dominated by the main bar, but there’s room enough for a few tables near the entrance and to the rear of the space. The kitchen’s concise but creative menu (the theme of which is referred to as “bistronomique”) is interspersed with seasonal Mediterranean favourites, and plenty of French influenced, inventive bistro fare. Think dishes like chicken Milanese, beef tartare with fruit, and delectable meat and cheese wooden board tasting plates. Serving honest food that’s hearty yet unpretentious, Bardo makes for an ideal after-work meeting place or a late evening chill spot. And be sure to sample some signature cocktails from the tempting drinks list.

The new “restaurant-in-grocery” concept at VIVIN’s flagship gourmet food shop on Ekkamai Road has given birth to what might be the city’s first “Grocerant”, with seating for around two dozen diners. The extensive all-day dining menu begins with breakfast highlights like free-range egg ‘fluffy omelettes’, made with artisanal cheeses and optional sides like pork lardons and potatoes, or seasonal vegetables with homemade pesto. For lunch, gourmet baguette sandwiches are available in 20cm or 40cm sizes, or try the juicy French homestyle burger varieties, available topped with (you guessed it) artisanal cheeses. For dinner, opt for one of the bronze-cut pasta dishes, a classic duck confit with mashed potatoes and seasonal vegetables, the sumptuous artisan charcuterie and cheese platter, or request a delicious steak cooked to your liking served with a choice of housemade sauces. Desserts, pastries and so many other mouth-watering goodies are also available, as well as coffees, herbal teas, natural wines, and craft beers.

When it comes to high end coffee spots, the all-day, lobby level Tuxedo Espresso Bar at the Carlton Hotel Bangkok Sukhumvit is by no means your run-of-the-mill lobby lounge. Instead, what you’ll find here is a selection of premium coffees and one of Thailand’s first Modbar espresso machines, as well as some other advanced roasting, grinding, and brewing equipment. The baristas here really know their beans, and are adept at serving up specialty brews like the 48 hrs Cold Drip (using a special cold drip “tower” AKMA by Dutch Lab), and the Tokyo-influenced, mocha-like Dirty Tuxedo coffee, with chocolate sauce. As for baked treats, the pâtisserie, boulangerie, and viennoiserie are made daily in an adjacent glass-fronted pastry kitchen. There’s also a Tuxedo Afternoon Tea available, which features savoury and sweet morsels accompanied by TWG premium tea.