Prestige Gourmet: The Iconic Arrival of Blue by Alain Ducasse 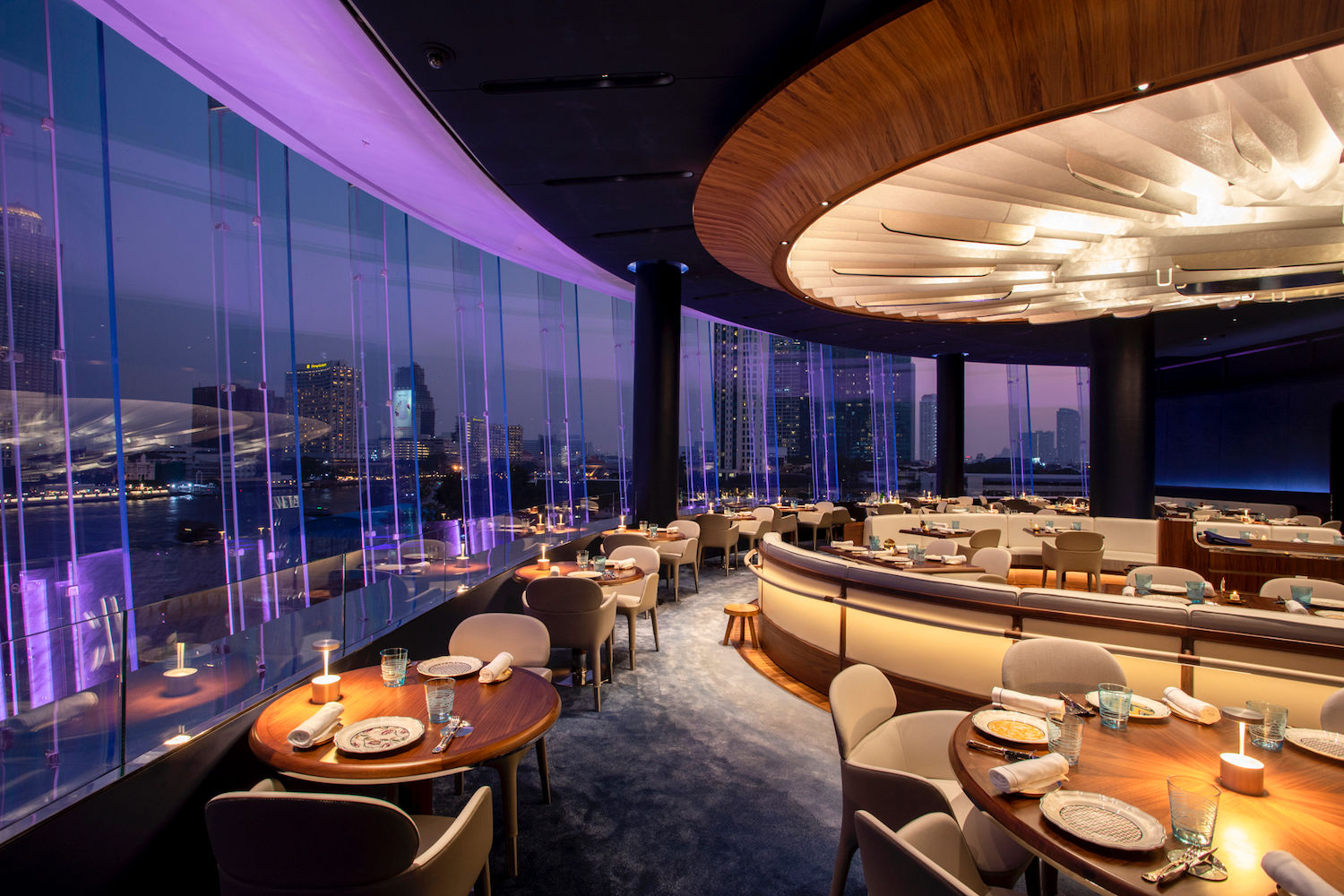 Walking into the main dining room, I am rightly impressed. Set in flowing wooden supports, a massive chandelier of pleated cream textures adds sparkle and warmth to the space with its palette of cream, luxurious royal blue, and natural wood. At the opposite end, the floor-to-ceiling windows frame glorious views along the river and across the city. A moment earlier, a smiling receptionist had led us through the secluded lounge that is open all day for drinks and snacks or a sumptuous high tea. It is inspired by the intimate gardens – bosquets – of the Château de Versailles and lit by long suspended walnut and brass lamps that create the light of fireflies.

This is the space where culinary legend Alain Ducasse has put a pin in the city’s dining scene after a five-year will-he-won’t-he guessing game. Blue by Alain Ducasse at IconSiam, the tony lifestyle destination on the banks of the Chao Phraya, is a magnificent showcase that befits his legend.

Today, with plenty of Michelin stars (21) to form his own constellation, he is true blue culinary royalty, spoken of in the same breath as Escoffier and Bocuse for his contribution to French cuisine. His empire stretches from Las Vegas to Tokyo with 31 restaurants, two charming country inns in Provence, a cooking school, industry training centres, chocolate and coffee stores, and a publishing house.

As with each one of his restaurants, Blue by Alain Ducasse at IconSiam is unique to its destination. It was designed by Jouin Manku, the Parisian spatial design studio who have designed all of his three-starrers. “Blue,” he says, “is unique to Bangkok and with its own particular identity. It has a contemporary French menu that I personally conceived, using carefully selected ingredients, and to be enjoyed in a magnificent setting with inspiring views over the Chao Phraya River that, together, deliver an unforgettable experience. It’s a place to celebrate and to get excited about food.”

With a reputation for personal attention to even the smallest of detail, Ducasse is obsessed with creating the total dining experience. I am told he approves everything from tableware to the fixtures, and even managing the talent to organising the kitchen. Executive chef Wilfrid Hocquet, a 20-year veteran of Michelin-starred kitchens, including the prestigious Louis XV by Alain Ducasse at the Hôtel de Paris Monte- Carlo, has been tasked to deliver the icon’s culinary vision in Bangkok.

Combining classic French know-how and cooking techniques with seasonal local produce, Hocquet says he likes to offer classical fine dining flavours in modern style that is easy to understand. “The menu is crafted up around the availability of the seasonal best harvest. We source ingredients from small suppliers and artisans in Thailand, and whenever the raw materials are not satisfactory, we import them,” he tells me.

On offer is an à la carte menu, a six-course tasting menu, and a three-course lunch set. To start off, Alex Cufley, the restaurant’s affable general manager, brings out a trio of canapes. There is a vegetable crudité stick of a roll of daikon radish topped with asparagus mousse and tempered with the slight sourness of a sorrel condiment, a sumptuous crostini with a terrine of foie gras topped with fresh black truffle, and a crunchy tapioca and quinoa croustillant with lemon condiment and marinated sea bream. It’s a sign of things to come.

Alongside, a glass of “Selection Alain Ducasse” is offered to us. An exquisite blend of Pinot Noir, Chardonnay, and Pinot Meunier, it’s a private-label Champagne bottled by the Lanson House just for his restaurants. It’s just another example of his attention to detail.

Hocquet then sends out an amuse-bouche; a pumpkin royale with sautéed pumpkin and toasted pumpkin seeds in a beautiful crystal bowl. It is accompanied by housemade, sourdough and salted brioche rolls with lightly salted butter from Beillevaire, an artisanal producer of cheeses, yoghurts, and butters.

There’s so much to try here, so little time. For starters, you can’t go wrong with the blue crab sourced from Phuket. The meat from the crustacean is lightly poached and served on a bed of fragrant tomato gelée flavoured with cardamom and chillies. Exquisite golden caviar from Kaviari crowns the top complementing each bite with tangy pops. A cracker with confit tomatoes adds texture to the dish.

Then lightly grilled octopus comes with a salad of pomelo and cauliflower florets sliced as fine as paper. The piquillo pepper and grapefruit sauce lend a bit of heat to the succulent meat. This is followed by sea scallops from Hokkaido, seared. The sweetness of the shellfish is balanced by leeks gratinated with the creamy nuttiness of Comte cheese and a Comte-White Port jus.

For mains, we first had the grilled lobster, curly kale and gala apple. It’s a contemporary take on a traditional French recipe. Boston lobster is first poached then lightly roasted to give it a supple texture. It is served with a delicate homardine sauce with apple jus for freshness, and a Savoy cabbage gateau topped with gala apple.

Hocquet doesn’t hold back in dessert section either. There’s the delightful Instagrammable one with strawberries. An elegant fromage blanc shell is balanced on strawberries marinated in lemon and a jam of the fruit. Then a warm jus of fruit is poured into the shell. This one will make it to the timeline of many an Instagram account. My favourite though was the caramelised hazelnut soufflé, perfectly risen. Light and airy, it comes with a delicious sourdough ice-cream.

With its stunning location, top-notch menus and wine list, and attentive yet discreet service, will the culinary legend add another star to his constellation? I think so but only time will tell.