Chef Sainisa “Jay” Sangsingkeaw returns to the dining scene with STAGE, a casual fine-dining restaurant serving up globally inspired menus. We check out what’s on offer.

Blink, and you might miss it. Only a tiny signpost indicates the turn-off to the restaurant tucked down one of the many alleyways off Ekkamai Road. In a row of dull shophouses, the classic blue wood-and-glass façade, reminiscent of a Parisian bistro, catches the eye instantly. A small neon-lit chef ’s toque another indicator that we have come to the right place.

The door opens to reveal an interior envisaged by Paradigm Shift of Crimson and Canvas fame. It brilliantly fuses the warmth of Scandinavian minimalism with the sophistication of Parisian chic. Accent walls in midnight blue offset the blond flooring, the smooth cream banquettes, and the wallpaper with its pen-and-ink scene illustrations. An elegant chef ’s table takes centre stage in front of the immaculate glass-walled kitchen. This is the new staging ground for Sainisa “Jay” Sangsingkaew, former L’Atelier de Joel Robuchon chef and the only Thai to have been trained at the original two Michelin starred outpost in Paris. After the sudden closure of the famed restaurant in the city, this is what she and a small band of ex-colleagues are betting on to stage their return to the Bangkok dining scene. Fittingly it is called Stage (pronounced “satarge”, short for stagiairez, or apprentice).

“All of us were once trainees or interns in other restaurants before our reunion. The word ‘stage’ means trainee or intern in French, and in English means a place where performers present a performance,” says Jay, explaining the logic behind the name. “As you can see, our kitchen is visible for our customers to watch our performance and the decor is similar to a small theatre.” 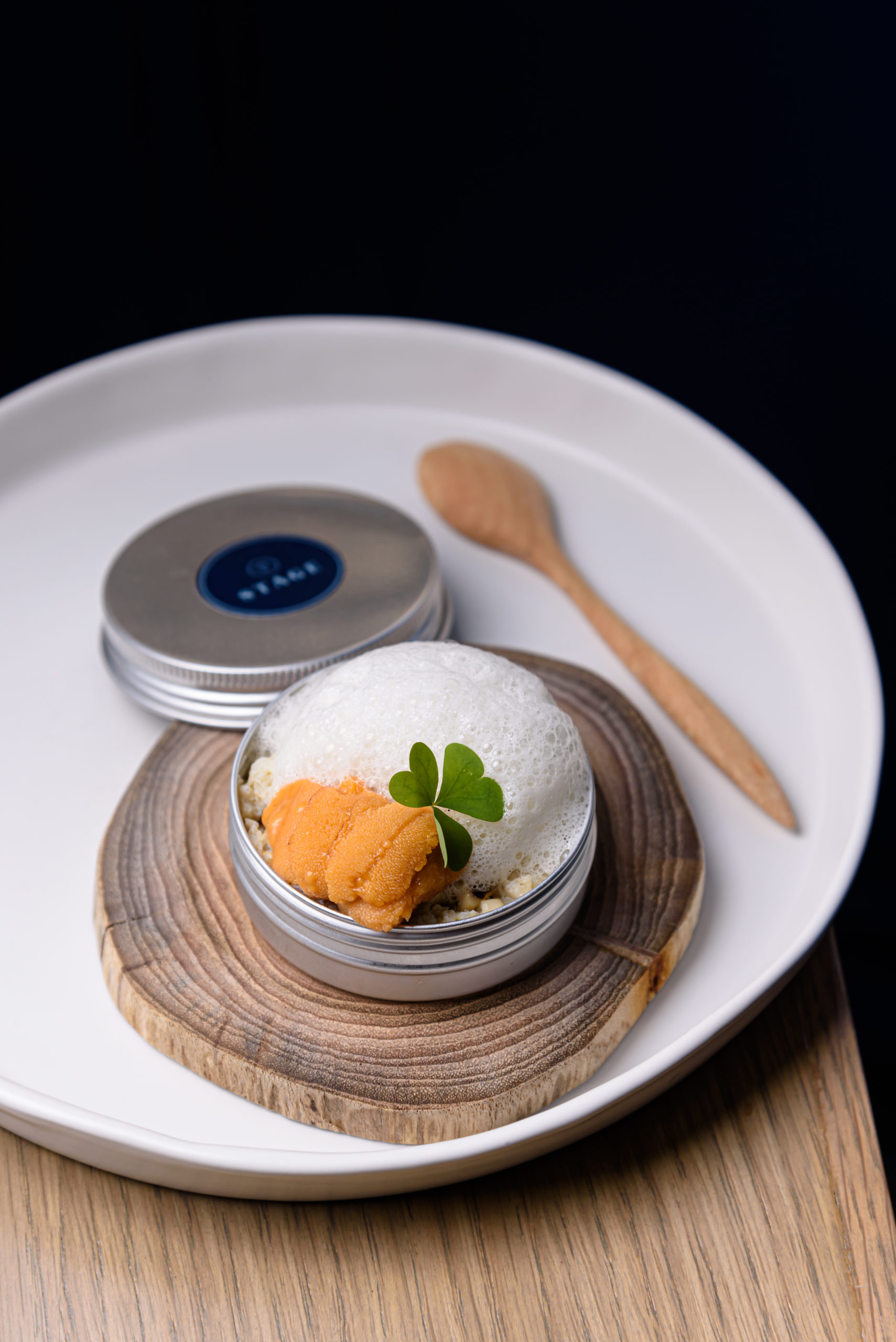 Jay and her small but talented brigade of Patiphan Sookmark (head chef), Thanaporn Phanthanaprathet (executive sous chef), and Rekha Limpichart (pastry chef) serve up internationally diverse cuisine using French techniques. There are three tasting menus: a four- and sixcourse and, the pièce de résistance, the 10-course ‘Stage Experience’, which highlights a variety of luxury ingredients. The menu changes every two months and focuses on a theme such as the Nordic-inspired one in play now.

“We don’t follow one cuisine. Our menus are globally inspired,” says Jay, who also cut her teeth at Lenotre and Fauchon. “We select the main ingredients first from what’s in season, then come up with the menu. Each one of us shares ideas, and we develop the menu together.” The front of house is ably managed by Pattarapol “Louis” Ponraritt. Previously the sommelier at L’Atelier de Joel Robuchon, and head sommelier at Bangkok Marriot Marquis Queen’s Park, he has curated a fantastic wine list of natural, biodynamic, and hard-to-find classic vintages here. A cocktail and whiskey table-side service is also on offer. Louis quickly sets us up with a glass of Champagne Chartogne-Taillet “Saint Anne”. It’s  a crisp, dry blend of Pinot Noir and Chardonnay from France that pairs well with ‘Snacks’, the teasers that kick off all the three menus. A seed cracker comes piled high with briny ikura and a delicate mousse of cod, topped with shavings of almond and chives. A wooden fork holds slivers of cured duck, the salty flavour of the bird counter-weighed by sweet shallot gel. And finally, there is a house-brewed gooseberry kombucha to ready your palate for what’s about to come.

‘From The Sea’ is prettily plated, served in a palm-sized scallop shell that will have you reaching for your phone cam. Lengths of squid are poached in dashi before being lightly grilled to render them to tender perfection. They are dressed in red and white seaweed for texture while drops of passion fruit reduction add spikes of sweet-sour tartness.

A froth of vanilla wreathes the shiny round tin placed in front of us, highlighting the bright yellow lobe of fresh uni with its rich, creamy texture. It sits on a bed of brown crab meat and grilled Hokkaido milk corn. Louis offers a nigorizake (which roughly translates as “cloudy sake”) with it. Brewed only during the winter months, the Born First Snow Nigori Nama-Genshu is voluptuous, elegant, and instantly memorable.

Then, in a large white platter white tuna belly, trout, and mackerel lie, separated only by spears of white asparagus. There is a crumble of horseradish to cut through the fattiness of the fish, but it is the quenelle of wasabi ice cream that makes the dish sing altogether. With its understated sweetness and a delightful tickle of the nostrils, the ice cream should be a dessert by itself, or perhaps one paired with a chocolate component.

Venison is the star of ‘From The Land’. It is dry-aged for two weeks, diced, and then combined with caper, shallots, and chives, all of which is brought together with special house-made dressing then dressed in fried sage leaves and autumn leaf. It’s a simple dish that’s immensely satisfying, as is the next plate of a gleaming Carabinero prawn from Spain. This bright scarlet prawn, also known as crevette imperiale in France, is coveted by chefs the world over for its distinctive colour and firm, succulent, flesh. Chef Jay serves it raw, brushed only with citrus oil, and it is sweet, briny, and creamy all at once. The head is removed, dehydrated, and baked into a chip. It’s mildly addictive and could become the next big thing in snack food, like the salted egg fish skin craze. It’s accompanied by the distinctive ‘Hang’ rice from Sakhon Nakorn, which is cooked in kombu dashi and prawn shell stock and tastes like a cross between risotto and sticky rice. This is precision cooking designed to get the best from top quality ingredients.

The kitchen’s inspired take on the humble sala pao comes next. The caviar bun is choux pastry, baked first and then fried. The runny filling of buttermilk cream, chives and caviar makes for a combination that’s the least favourite of what I have eaten so far, although my dining companions say otherwise. The next two dishes more than make up for the previous. Abalone is sliced, sautéed, then sat on caramelised onions in a bit of cream. Black garlic and wasabi in gel form kick in a touch of sweetness and zing. For the mains, it’s a simple meatloaf elevated to the next level. Ground Japanese and Australian beef are wrapped in bacon with pistachio, and crowned with slices of winter black truffles. In a nod to their previous employer, there is also silky-smooth mashed potatoes, though I wish there was more than just a smear of it. An umami-rich veal gravy neatly ties everything together, but seems at odds with the sweetness of the peach sauce on the plate. Don’t fret there is chocolate to end the meal too. Louis rolls up the dessert trolley along with a glass of Eric Bordelet “Argelette”, Grand Cru cider that combines 19 varieties of apples. Its intense flavours are an excellent match to the selection of mignardises: cherry, cherry gel and white chocolate, banana cream with white sesame, white truffle ice cream, marshmallows with honey and peach jelly, and mixed nuts with caramel and chocolate. That may not be the end of the evening. If you are lucky you might be given the key to secret room at the back of the restaurant. Here you can kick back on a velvet couch with a dram from the chef ’s collection of single malts and enjoy a fine cigar.

To find out more, visit restaurant-stage.co.

Sign up to get the latest luxury and lifestyle news delivered to your inbox.
Wine and Dine reviews PRESTIGE GOURMET Restaurant Stage
Gavin Nazareth
DINING

Tasty Alternatives to Replace Your Trendy (but Highly Polluting!) Foods