The Story House: A New Culinary Chapter at The Siam 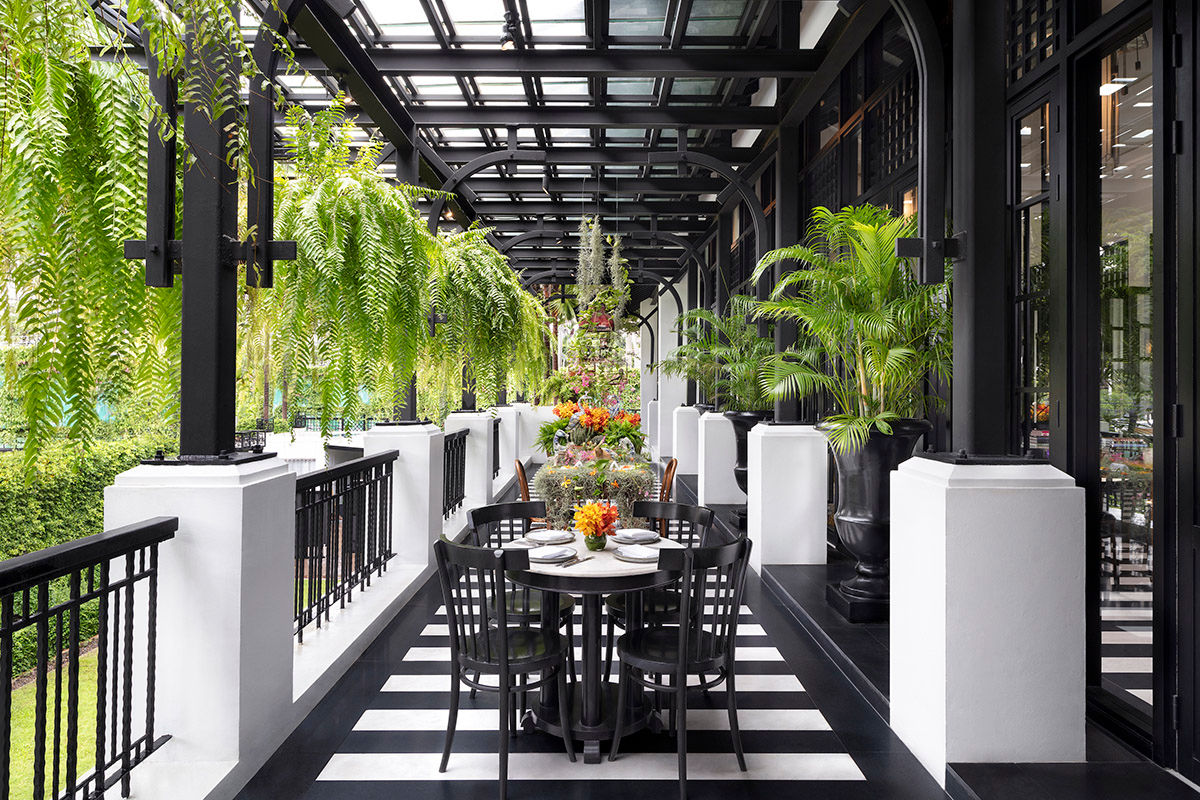 Wine & Dine
The Story House: A New Culinary Chapter at The Siam
Share
Next article

Bangkok’s iconic riverside boutique resort The Siam has added a new chapter to its long and storied history with the grand debut of The Story House restaurant. Prestige takes a closer look at the hotel’s exciting new dining concept.

Reinvention is undoubtedly the word that best describes how to succeed in this ever-changing world of ours. At The Siam, one of Bangkok’s most beloved and visually captivating hotels, the idea of “reinvention” has resulted in several new upgrades and additions to this landmark property. A little over two years ago work began on several notable modifications, including putting a solarium-style glass roof over the inner atrium courtyard, and entirely revamping the dining area formerly known as Café Cha – famous for its afternoon tea service – which has now been reborn as The Story House.

While in-house guests at the hotel have been able to sample this new restaurant’s offerings for a while now, the general public only got their chance at the beginning of July 2022, when the restaurant began its official soft opening phase. So, what’s there to see, you ask? Well, first of all, there’s the utterly unique décor which, in keeping with the property’s overall design style, is an enthralling mix of Art Deco elegance and antique collector eccentricity. And lending his impeccable sense of taste to it all is the famed architect and designer who has been with The Siam since the very beginning.

“Bill Bensley was brought in to do the whole area,” explains General Manager Nick Downing as he guides me on a brief tour. “He’s responsible for the architectural alterations, and the whole feel of everything. It involved not just The Story House, but also redoing the welcome courtyard, the reception area, and the curio store.”

What visitors will encounter at The Story House is an interior divided into five, light-filled rooms, starting with a small coffee shop at the entrance, followed by a cosy lounge space, the main dining hall with its soaring, sloped ceiling and marble topped tables, and two private dining rooms – one with a rectangular wooden table, and one with a circular wooden table. In each room, adorning every nook and cranny, are eye-catching art pieces and antiques; a vintage rocking horse here, sculpted figurines on pedestals there, a pair of chairs painted like tigers over there.

Nick goes on to mention how the new restaurant got its name. “The Siam has so many stories around it, and such history, so we decided to call this space The Story House. Every room is a different chapter, and has a slightly different personality, and there’s also a story behind every curio and artwork, all from the collection of Krissada “Noi” Sukosol Clapp, the hotel’s founder and creative director.”

As he tells me this, my gaze is drawn upwards to the trio of magnificent Art Deco, vertical chandeliers that are suspended over the tables in the main dining room. “Those chandeliers were custom-designed by Bill,” says Nick, anticipating my next question. “This room needed something, because of the height of the ceiling, and the day those went in it just made the whole space.”

Knowing when you’ve got something just right also applies to the management’s selection of the man behind the new menu, which in this case is Blair Mathieson, a New Zealand native who was part of the pre-opening team and was the Executive Chef when The Siam first opened its doors exactly a decade ago. Blair has since gone on to do other things – Quince, for instance – but the decision to bring him back as The Siam’s official Consulting Chef, overseeing new concepts, was simply a case of getting the best man for the job.

“We love his style of food. It’s very fresh and modern, and it’s not really any particular cuisine – it’s a mix. It’s a collaboration of so many different flavours and styles and ingredients from all over the world.” says Nick, adding that Blair’s most recent duty is working on “ensuring our breakfast is recognised as one of the best in Bangkok.”

As for my own lunchtime tasting, it begins with the arrival of the lobster roll, in which tasty chunks of Maine lobster are mixed with lemon aioli, ikura (salmon roe), and chives, all wedged into a soft brioche. It’s marvellously rich and delightfully decadent, so no surprises there, but things quickly shift gears when the portobello mushroom panna cotta makes its appearance.

Looking more like a dessert – it is a panna cotta after all – I’m slightly baffled, and a tad wary, of how mushrooms could work here. But the first bite is extraordinary! Created using a slow-cooked purée of portobello mushrooms, onions, garlic, and a red wine reduction, this purplish panna cotta is served alongside asparagus, walnuts, thinly sliced zucchini strips, and balsamic. Nick shares that this particular dish was on the original menu at the Deco Bar & Bistro, back in 2012, and has always been a personal favourite of Noi’s.

The next dish is also an eye-opener, consisting of pan-seared calamari – fresh from Southern Thailand – paired with velvety hummus, piquant chili jam, and an earthy walnut-coriander pesto. Hummus and squid makes a terrific combo, if you’ve never tried it, and in this plating everything works in perfect harmony. When I ask Chef Blair about it he gives a characteristic nonchalant shrug, and remarks it was the result of “just playing around with a few different flavours, tastes, textures, and colours. Keeping it light, fun, and accessible”.

Two of the other seafood specialties to make room for are the pink snapper, served with clams, fennel-saffron broth, peppers, and a basil lemon aioli, and the wonderful pan-roasted turbot paired with Jerusalem artichokes, edamame, capers, raisins, and a sherry vinegar.

On the meatier side of the spectrum there’s the roast bone marrow starter, served with Cape Grim (Tasmania) beef tartare, chili paste, anchovy Ikura, and crisp shallots, as well as the tantalising free-range pork chop coupled with radicchio, cauliflower purée, chorizo jam, and hoi sin sauce. And, of course, grilled beef lovers will definitely gravitate towards the Cape Grim grass-fed tenderloin dish, which arrives before me accompanied by crisp potatoes, asparagus, a zesty chimichurri salsa topping and red wine jus. It’s a well-orchestrated ensemble in which each element shines.

The Story House’s compact, yet varied menu also includes a section nicely tailored to suit veggie lovers, entitled ‘Tales From the Garden’. From here we sampled the roast cauliflower dish, in which chunks of lightly charred cauliflower are paired with caramelised onion, sunflower seeds, dollops of hung yoghurt, sumac, and fresh dill. It’s quite good, with the onions adding a nice sweetness and the yoghurt and dill contributing a pleasant freshness, but I actually found myself more partial to the aptly named Grains Bowl; a mix of pearl barley, quinoa, chickpeas, broccoli, edamame, feta cheese, and miso dressing. The feta, for me, nicely anchors this already yummy and very textural dish, but I also love the sprinkling of pomegranate on top – found also on the cauliflower plate – which adds both colour and tartness. It’s also worth noting that these health-conscious dishes can be ordered full-course size, or as side dishes.

However, the showstopper finale is the aptly named Soft Chocolate; a mound of aerated chocolate mousse – made with 72 percent dark chocolate but less cream than a normal mousse – which strikes the perfect midway point between fluffy and dense. This sinfully superb chocolate would be fabulous enough on its own, but the addition of sea salt caramel, honeycomb pieces, slivers of orange, and just a hint of basil makes it positively soar. You’ll be back for this one.

With so much to choose from on the à la carte menu, the management has wisely decided to also offer a classic prix fixe set menu to make the task a bit easier. It’s attractively priced at THB 1,650++ per person, for three-courses, with each course allowing diners to pick one of three selected items (salad, main, and dessert). The Story House is open daily, serving lunch from noon to 3pm, and dinner from 6pm till 10pm.

For more information and reservations, visit The Story House.