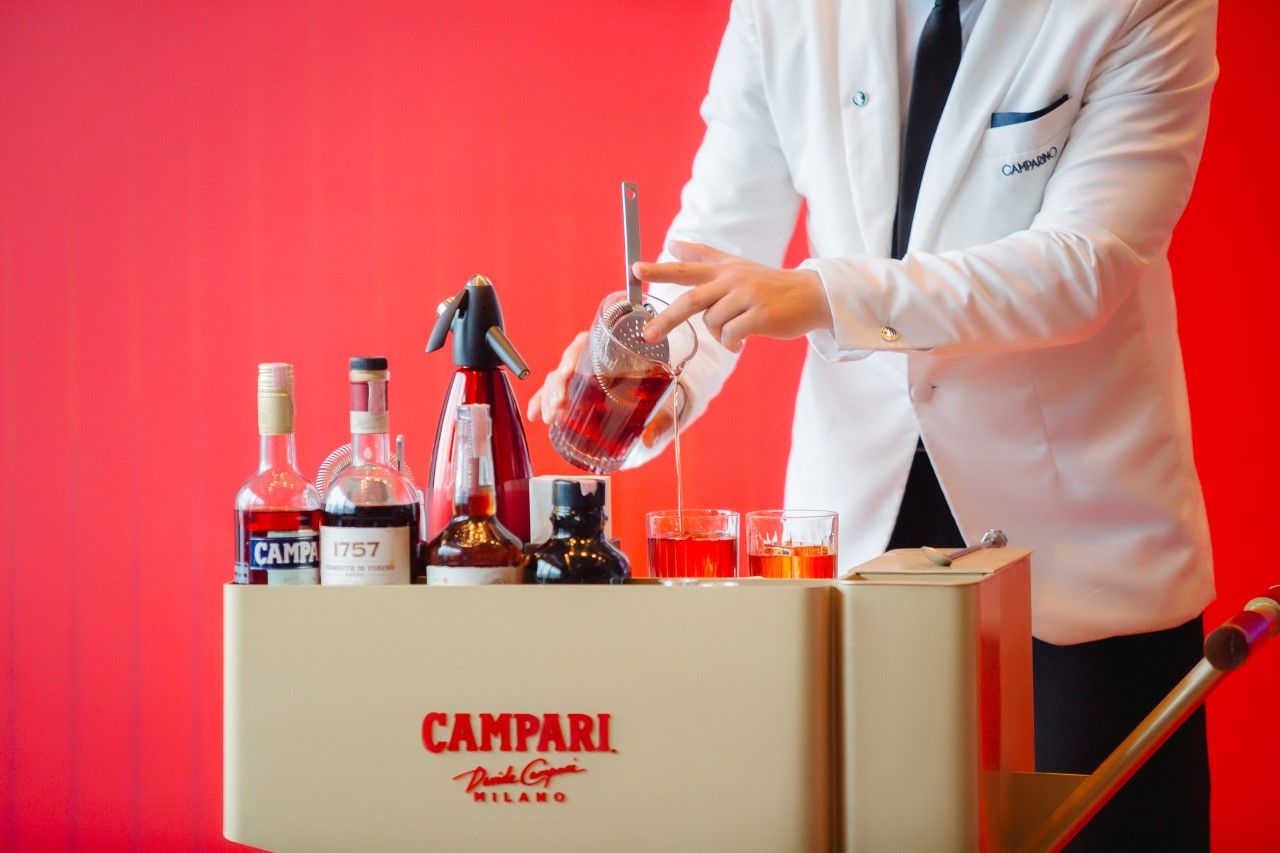 Campari – the iconic, unmistakable, vibrantly red Italian bitter – has come to Thailand to present its latest Camparino in Galleria Asia Tour in Bangkok at the Pool & Elements Terrace at the Okura Prestige last month on, officially bringing the Milanese Aperitivo culture right to the heart of Thailand’s capital.

The event played host to local media and key industry players and ended by opening its door to the public. Guests were able to immerse themselves in Milanese culture and rituals of aperitivo led by hosts Tommaso Cecca and Saverio Casella. The store manager and head bartender and bartender of Camparino in Galleria, the 107-year-old historic bar in the heart of Milan and birthplace of the much-loved Italian aperitivo culture.

The duo crafted a range of cocktails including La Ragazza in Treno, an unusual Negroni twist with a touch of Frangelico and strawberry; Silk Road, a cocktail that uses Bai Jiu and Campari Cask Tales, a dedication to the Camparino in Galleria’s 1st Asia tour and more.

“Inspiration of the Camparino in Galleria with over a century of history is the symbol of the authentic Milanese aperitivo and represents the heart of Italianity at its finest. This series of takeovers will showcase the art of mixology and the unforgettable story of the Italian aperitif. We are delighted to partner with Jigger & Pony to bring the rituals of aperitivo experience to Singapore with Camparino in Galleria,” said Tommaso Cecca.

To top off the experience, the famed store manager and head bartender of the iconic Camparino in Galleria also led an afternoon masterclass that was attended by bartenders and cocktail enthusiasts alike.

Bartenders and those working behind the bars in Thailand got a rare treat with an exclusive appearance of Tommaso, who is considered a veteran bartender now manning the operation of the legendary Camparino in Galleria. Through the class, Tommaso took Thai bartenders in on the journey of Campari from Caffè Campari, the birthplace of the Aperitivo, to Camparino in Galleria, one of the World’s 50 Best Bars.

According to Tommaso, for an institution that last year alone had 90 million engagements across all social media platforms and an average of 1,500 customers frequenting daily, Camparino in Galleria is an ancient bar that builds its long-standing success and global reputation on human touch, uncompromising quality and dedicated, knowledgeable staff.

Camparino, in Tommaso’s comparison, is very much similar to Campari in terms of its universal relevancy and the uniqueness that stands the test of time. While the bar’s iconic features are well preserved and honoured, contemporary touches need to be added to include younger clientele, not just from Italy and Europe but from all over the world.

“Previously, most of our customers were people in their 60s, but now they also include a much younger crowd. Obviously, we can’t choose who a bar as historic as Camparino would appeal to, but we can try a few things,” the head bartender said.

Looking forward, Tommaso revealed that the brand is looking to expand Camparino’s legacy to other parts of the world, potentially Asia. “It would be ideal to offer something unique and typical Italian in a new city. We’re truly Italian in essence, but we’re also very international. Our team consists of talents from all over Europe and beyond, a very refreshing culturally diverse workplace. Also being ranked no.27 in the most recent World’s 50 Best Bars list means we have much more work to do, and more customers to reach.”

The event, which was one part of the Asian tour where only Bangkok and Singapore were included, was hosted by Campari Group & Alchemy Thailand, Daniel Schwalb, Campari Group Managing Director – Southeast Asia, and Kristian Harmston, Alchemy Asia Group Chief Executive. The afternoon masterclass was followed by Camparino’s cocktail tasting and the chic, celebrity-clad Aperol Spritz Sunset Lounge party at Pool and Element Terrace.

About Camparino in Galleria

Camparino in Galleria is an over-a-century-old, historic bar and landmark located in Milan, Italy. It is famously known as the birthplace of the Milanese aperitivo, overlooking and residing by the Duomo from the past and present, and favoured by celebrities and locals alike.

With more than a century of storied history since its opening in central Milan in 1915, Camparino is an experience for fans of the Italian aperitif tradition and the uninitiated alike.

However, Camparino in Galleria is not only a meeting point or the symbol of the ritual of the aperitivo in Milan, but it is also a point of excellence and pride for the city. As a result of this legacy, Camparino in Galleria was thus able to establish its prestige in the panorama of beverage and mixology throughout Italy and beyond. It has succeeded in bringing its art and prestige to an international level.

On December 7th, 2021, the iconic venue was proclaimed as the 27th bar in the world for the 50 World’s Best Bars awards – the most coveted ranking of bars around the world. It is both an achievement and testimony that consecrate Camparino in Galleria as among the pinnacle of great mixology.