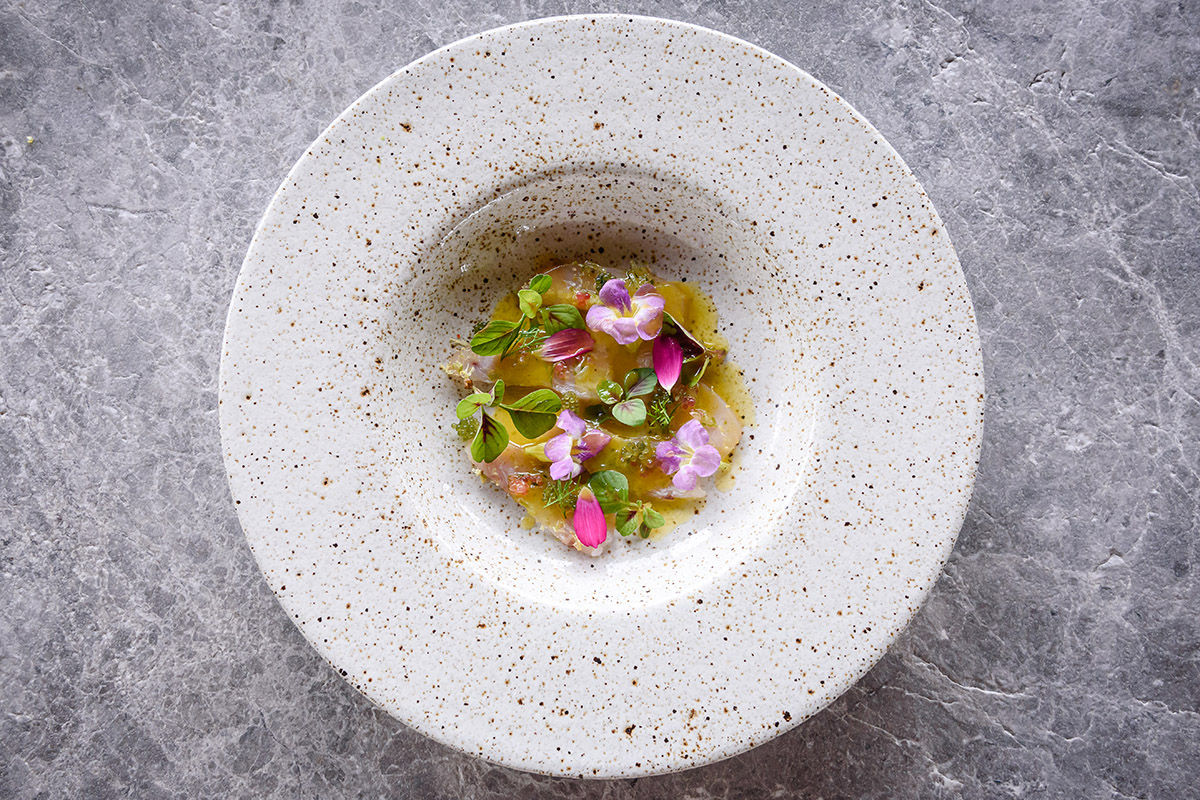 The focus on sustainability at Jampa makes it a perfect example of how committed chefs can be more eco- and health-conscious without having to sacrifice one iota on taste. Prestige makes a lunchtime visit to both the restaurant, and the on-site Pru Jampa Farm

If you really want to be taken seriously as a “farm-to-table” restaurant, then you should probably have your own farm, preferably within walking distance of the kitchen. This is definitely the case at Jampa, the showcase dining venue at the soon-to-open Tri Vananda wellness resort in Phuket. Heck, the restaurant even goes a step further by eliminating “table” and opting to refer to itself by the more alliterative term “farm-to-fork”, underscoring the fact that what you consume makes ample use of the vegetables, herbs, flowers, fruit, and fungi grown at the on-site Pru Jampa Farm.

That farm, incidentally, is also shared by PRU, the Michelin-starred restaurant that’s part of Trisara – one of Phuket’s most exclusive seaside resorts – and both Trisara and Tri Vananda are properties under the umbrella of Montara Hospitality Group. Coincidentally, PRU and Jampa also both have charming head chefs from Holland, who both put a focus on sustainability, but in most other respects they offer vastly different dining experiences with wellness, as I discovered during a recent lunchtime visit to Jampa on a sunny Friday afternoon.

The gorgeously designed, high-ceilinged interior is warm and welcoming, with seating for 30-35 persons. The abundance of blonde wood and earth tones gives it all a slightly Nordic feel, while the floor-to-ceiling windows let in plenty of natural light and offer views of the green forested hills in the near distance. There’s also a small deck with outdoor seating, should you desire an even closer communion with nature.

Jampa officially opened its doors last November, but 30-year-old Executive Chef Rick Dingen has been with the project since its inception (in June 2021). A native of Eindhoven, a town in the south Netherlands, Rick entered the chef trade at the age of 14, attending culinary school in his hometown before moving to Amsterdam two years later. At 25 he made the move to Southeast Asia to join fellow Dutchman Henk Savelberg at his eponymously named Bangkok restaurant. He spent two years at Savelberg before moving on to Haoma – one of Bangkok’s premier locavore focused dining spots – and later the Anantara Siam Bangkok Hotel.

A delicious distillation of Rick’s cumulative training, knowledge, and enthusiasm for “zero waste cuisine” can be found in Jampa’s marvelous ‘Experience Menu’ – a six-course introduction to a food philosophy in which the dishes are nutritious, and natural sweeteners are used in place of sugar whenever possible. Things begin with an off-menu, two-part starter snack featuring lightly spiced chips made from farm-grown cassava, and a sourdough crostini topped with creamy fish paté and a salty dollop of Hua Hin caviar. The paté, Rick points out, is made using salvaged kitchen leftovers, adding “We keep everything, and try to use it again.”

The first menu-listed course is the melt-in-the-mouth, cured and smoked king mackerel – locally caught – poured over with a zesty green chili and pineapple sauce, and vividly decorated with beautiful edible flowers. “They’re also from our farm,” Rick says, “but they change daily. They’re colourful, and also tasty.”

That fabulous dish is followed by a salad-type course, the main ingredients of which are wood-fire roasted zucchini – from Chiang Mai – and creamy stracciatella made from a Thai buffalo and cow milk burrata. The dish also incorporates garlic flower, sundried tomato, basil, and a green oil made from various plant bits. “All the big leaves from our farm, that are used for plating, we don’t throw away. We keep all the greens, and the herbs from the day before, to make pesto, oil, marinades, all sorts of things.”

This superb salad also comes paired with thick slices of homemade sourdough bread topped with barbequed, farm-grown green jalapeños that turn out to be surprisingly mild. “If you put them on the barbeque it cut the spiciness. It won’t burn your mouth,” Rick assures with a chuckle.

While the first few courses have been perfectly pleasant, the next dish delivers a bit more of the “wow” factor. Here, octopus from Racha island – about 25km off the southern tip of Phuket – is grilled and served draped in a delicate sheet of lardo (pork fat), with white elderflowers and pea shoots strewn on top. Under the smoky, tender tentacles lies a layer of deep green chakram (sea blite), which itself rests on a bright yellow bed of housemade piccalilli.

“We keep all the off cuts of the vegetables, and then on Sunday we make a piccalilli,” explains Rick, “with cauliflower, or cucumber, or whatever we have.”

Next to arrive at the table is the red mullet fillet which has been wrapped in banana leaf and wood-fired to give it a nice smokey flavour. On top is barley, a surprise ingredient from northeastern Thailand, which has been dried and then quickly deep-fried (looking to me like mini popcorns). Rounding out the dish are thin slices of watermelon radish, green radish, and red radish, as well as a broccoli purée, while the final step is a drizzle of sauce made from the bones and head of the fish.

It may be apparent by now that BBQ-style cooking features prominently in this menu, and that’s because “live fire” is one of the key pillars of Jampa’s culinary ethos. In fact, the only mention of “deep frying” I’ve heard so far only had to do with the barley in the previous dish. For health-conscious diners it’s a welcome change from the overuse of cooking oil in so many kitchens.

This focus on fire reaches its zenith in the next dish, the utterly addictive smoked BBQ spring chicken. Sourced from Khao Yai, these organically raised birds are hot smoked – using pine wood – for 40 minutes to an hour, before being arranged on an earthenware plate alongside farm-fresh mushrooms, spunta potatoes from Chiang Mai, curly kale, black garlic gel, and a spoonful of housemade BBQ sauce. But it’s ultimately all about the chicken, and from the very first bite the deep, almost primordial, wood fire taste of this free-range fowl has me totally transfixed. Yes, food is meant to taste this good for wellness dining.

Things wind down in gentle fashion with the pre-dessert – a mix of Phuket pineapple, chocolate shavings from Chumpon, and pineapple ginger ice cream – before concluding with Thai-grown figs served with goat milk honeycomb ice cream and lemon basil. The desserts are sweet but never overly so, and the same can be said of the two fruit-based drinks we sampled: starting with the G-rated ‘Watermelon Sugar’ (watermelon juice, coconut shrub, mint, and Thai chili on the glass rim); and ‘Summer of 69’ from the low ABV cocktail menu (sherry, gin, peach liqueur, cucumber juice, pineapple juice, lime and mint stem honey).

Although the meal is over, we don’t leave yet, as Chef Rick has promised us a quick tour of Pru Jampa Farm. Joining us are two other diners who just finished lunch, one of whom turns out to be the chef at a swanky Phuket resort. As our group strolls through the neatly organised rows of produce – a young papaya tree over there, a patch of lemongrass over there – our amicable host is happy to answer all our horticultural queries. Our tour also winds past the chicken coop and the duck pond (both a source of fresh eggs), before arriving at the edge of one of the many small lakes dotting the property.

In the distance Chef Rick points to a smallish structure across the water. “On Saturdays, at lunch, we present ‘Hideaway by Jampa’. We close the main restaurant and move everything here, on the farm. There’s seating for 16-18 persons, and people love dining between these two lakes.”

It doesn’t get more “farm-to-fork” than this!