Prestige Gourmet: Reviewing L’Arôme By The Sea, in Phuket 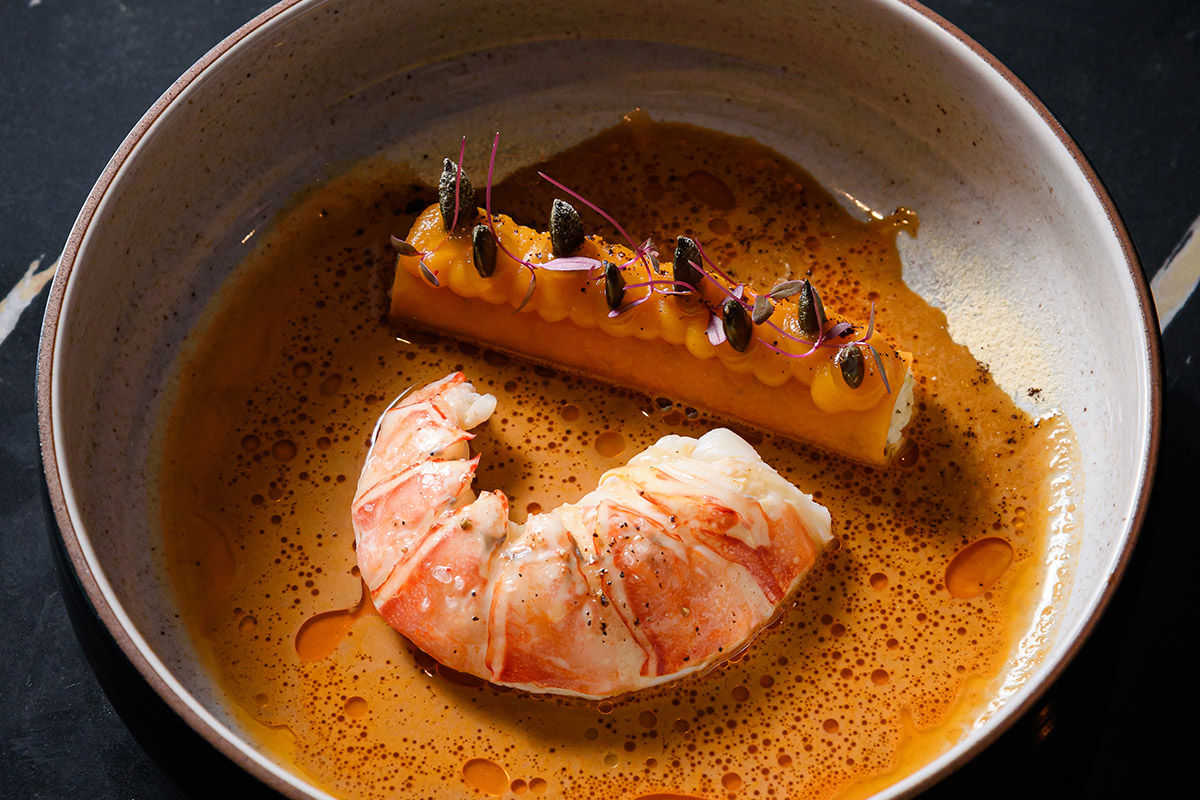 In 2019, when Thailand’s Michelin guide expanded to include Phuket and Phang-nga, it gave the dining scenes in each province a much-needed shot in the arm (or “kick in the pants” depending on your viewpoint). Admittedly, only one restaurant has been the recipient of a coveted star since that time, but the spotlight now being shone on this region has definitely caused restaurateurs, especially in Phuket, to up their game considerably.

With Phuket’s gastronomic renaissance now in full swing, some interesting new players have arrived at the table. One of the most buzz-worthy additions to the scene is L’Arôme By The Sea, which made its debut in the spring of 2021. Part of the L’Arôme Group of restaurants, this delightful seaside fine dining spot serves up contemporary French cuisine, albeit with plenty of tasteful twists – incorporating both Thai-sourced produce, and the Swiss Alpine heritage of Yannick Hollenstein, the restaurant’s award-winning Executive Chef.

The restaurant’s interior design makes the most of the spectacular beachfront setting, with floor-to-ceiling windows that look out over the ocean – picture perfect for sunset suppers. The tastefully decorated main dining room can accommodate up to 30 persons, while the upstairs rooftop bar and lounge has space for about 50 (with indoor and outdoor seating). And while a view like this would be the main attraction at most eateries, the real star here is Chef Yannick’s incredible menu – both the à la carte selections and the set menu dinners.

The appropriately named, seven-course ‘Menu Prestige’ dinner (also available in five courses), takes diners on a fantastic sensory journey, where each dish is an intricately prepared work of edible art. Five of the seven courses are “either/or” options, meaning diners can customise their individual taste experience. But with each option as delectable as the other – trust me, I tried them all – your best bet is to dine in pairs, order everything, and do some sharing.

After some intriguing amuse bouche plates – including a fishbone-shaped potato cracker, a foie gras macaron, and a charcoal tartlet filled with asparagus mousse and imported Swiss Bündnerfleisch – the dinner begins in earnest with Phuket-caught smoked king mackerel that’s been cured, smoked in cherry wood, sliced thin, and delicately wrapped in green, white, and red radish. Underneath sits a bed of mackerel tartare, which is further surrounded by melon gazpacho, sea grapes, edible fern, and a sauce of cold-pressed celery juice with wasabi and basil oil. Needless to say, there’s a lot going on here, and it only gets more complex – and delicious – as things progress.

The next course forces diners to decide between an elaborate foie gras au torchon – served with a Chalong Bay rum jelly, Phuket pineapple chutney, tamarind sauce, and French toast – and the pan-seared Hokkaido scallop, with sugar snap peas, green peas, green soybean, black garlic, and a citrus vinaigrette with chorizo oil. The next course is an even harder decision, wherein a magnificent Phuket lobster and pumpkin cannelloni, topped with lobster oil and lobster bisque, goes up against the deceptively simple sounding ‘Chef’s Catch’.

“This one I caught myself,” Chef Yannick says nonchalantly as he presents the fish dish, adding that almost every ‘Chef’s Catch’ is his own, and that the whole dish changes with whatever gets caught. He even points out to me the small wooden fishing boat he uses, which now sits anchored on the beach.

“It’s jobfish,” he continues, “with ratatouille, red pepper foam with smoked paprika, spinach, black olive, Thai olive green tips, and two types of oil – one is sweet basil, and the other is smoked chili oil.” Beautiful to look at, and even better to eat, it’s so perfectly prepared that I’m sure even the fish doesn’t mind the sacrifice that was made.

Seafood features in the next course as well if you choose the imported Brittany cod. Poached at low temperature, it’s topped with blood orange purée and sturgeon caviar, and served with a saffron cauliflower purée and red spinach leaf – all floating in a foam created using Thai clam and French oyster. Sound good? Well, it is, but since I have a soft spot for Switzerland I was extra intrigued when I saw smoked cheese fondue on the menu as the alternate choice at this juncture. But this is no ordinary fondue. Crack the potato shell top and a puff of beechwood smoke is released, revealing a creamy treasure inside consisting of a five-cheese tortellini, onsen egg, and potato foam.

“In this dish I also use a special cheese from Bern [Switzerland] that’s aged almost one year, hard-pressed, and covered in pepper. It looks like a truffle,” Chef Yannick says, bringing one out to show me, “and we actually slice it with truffle grater.”

The final main offers a choice of either French quail ballotine, or tender Australian Wagyu striploin (MB6+) served alongside plump German white asparagus – while in season – topped with confit egg yolk, sugar snap peas, tarragon purée, watercress, and French morel, all bathed in a lovely sauce bordelaise. Both dishes are superb, but if forced to choose I’d probably lean to the bird, especially after hearing the details of its labour intensive preparation.

“It’s a whole quail. We debone it, and inside we spread morel, truffle, and black garlic. Then we roll it back up so you have the skin outside and the juicy meat inside,” the chef explains. “It’s served with braised red cabbage, a traditional Swiss recipe from my grandmother, and on top is marinated red cabbage and beetroot powder, and in front of the quail there’s a blackberry sphere filled with aged black balsamico, which you cut into. There’s also a quail sauce, which is made from all the bones, and we cook it like a demi-glace, with lots of red wine. It’s a bit of the avant-garde, paired with classic techniques.”

Next up is the elaborate pre-dessert – rhubarb compote, Thai basil and mint sorbet, and Greek yoghurt espuma with a hint of Campari – which is followed by a choice of either the artisanal cheese course, or a sweet dessert. For me I’ll always take cheese, and on this particular evening the five fromages consisted of blue cheese and goat cheese from France, two Chiang Mai cheeses, and one cheese from Switzerland, all of which came plated with traditional Swiss recipe fruit bread, honey, dried fruit, and nuts. Of course, the sweet dessert we also sampled was pretty wonderful as well, featuring mango done as a sorbet, a mousse, a chip, and in its natural state, served in tandem with passion fruit and mint foam on top.

As the evening draws to a close, and the last of the six exceptional ‘Prestige’ wine pairings gets poured – a luscious 2017 Trimbach Gewürztraminer from Alsace – I ask the 28-year-old chef if he’s glad he made the move to Phuket.

“It’s the best decision I’ve made in quite a long time,” he answers with a smile. “It’s my childhood dream. I wanted to be a chef, have a fine dining restaurant, and live on an island and have a fishing boat. And now it’s all come true.”

Perhaps the next dream to come true will be the one where L’Arôme By The Sea gets a “starring role” in the 2023 edition of Thailand’s Michelin guide.

To reserve your seats or find out more, visit L’Arôme By The Sea.