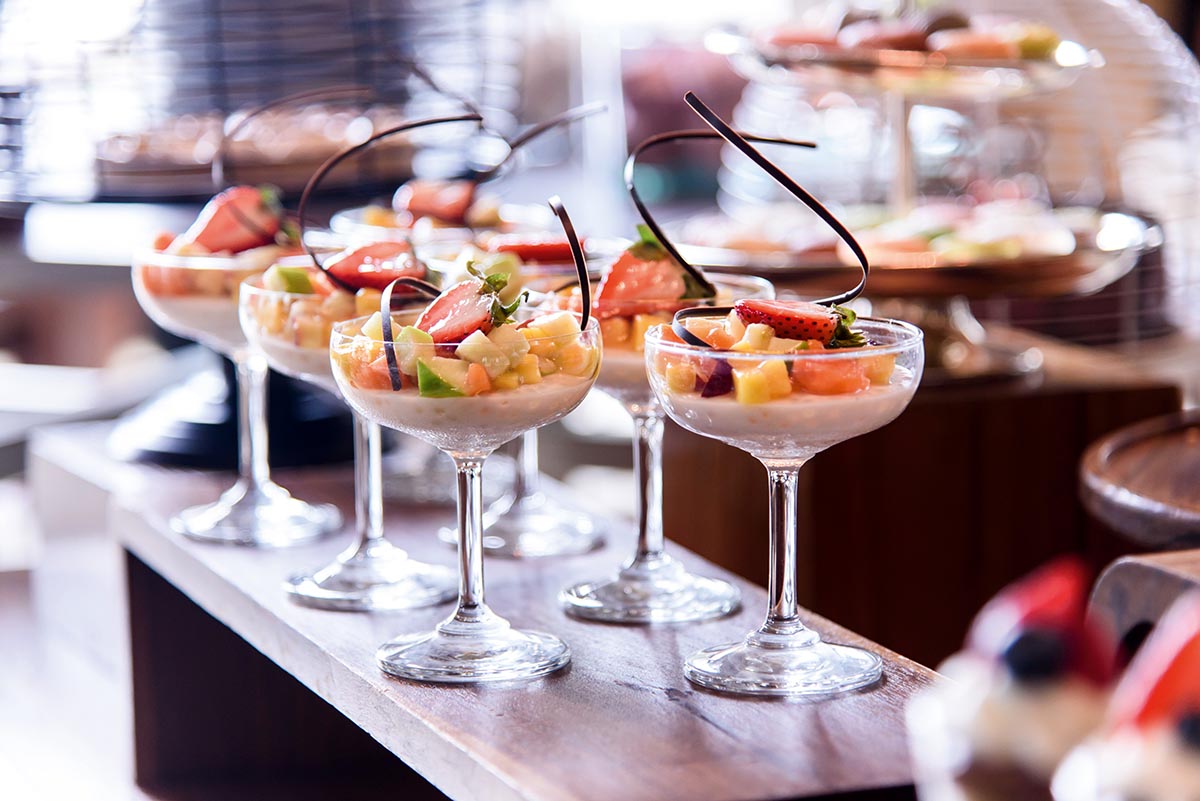 Brunch doesn’t have to be a blowout. As much fun as it is getting caught up in the haze of a boozy Sunday afternoon, not having to go to work on Monday with a blistering hangover or burning indigestion can be nice. Conversation tends to be better when you’re not blotto, too.

The Peninsula Bangkok would agree. The hotel turned over its concept not long ago, now trumpeting a more sumptuous experience intended to highlight a stunning riverside setting and its star dishes.

Sundays at The Pen, as it’s been christened, takes over the hotel lobby for three hours once a week. Here, a live band, featuring upright bass, baby grand, saxophone, and singer, provides entertainment attuned to an urbane audience.

The spacious, almost hexagonal lobby is plush with carpets, white linens, and a grand chandelier hung from a high ceiling. The lobby is illuminated naturally, its tables spaced out in that subtle way that projects luxury rather than screams it.

Such an atmosphere appeals to a crowd that might prefer to relish in the river views or relax in the garden with a cup of tea.

The Peninsula’s pursuit of a higher-class brunch has also led it to ditch bottomless bottles of bubbly and tortuous buffet lines in favour of select dishes prepared à la minute and one bottle of champagne per couple.

It’s quality champagne, mind you. Either opt for a bottle of Louis Roederer Brut Premier or upgrade to Louis Roederer Cristal for a little more money. The latter is lively and bright, leavened with underlying notes of white peach and dried apple and enriched with a honey-like sweetness. The taste is complex and faultless, and the finish long-lasting.

Like pretty much all champagne, the Cristal pairs beautifully with freshly shucked oysters. And The Peninsula has all your oyster needs covered.

Although the brunch has done away endless plates of signature dishes, it has kept a few elements of the tried and true buffet format. Specifically, seafood.

On the outer edge of the dining room, a chef stands at the ready to shuck your chilled shellfish. Juicy Fine de Claire, sweet Australian, earthy Irish oysters – these, at least, are all-you-can-eat.

So, too, are the tiger prawns, river prawns, lobster, and snow crab claws and legs. You can also go back for as much charcuterie as you can handle: hunks of fine cheeses, adobe-red discs of chorizo, paper-thin slices of Black Forest and Serrano ham.

On top of these smaller bites, which also include foie gras cooked to order, every guest gets one main from an à la carte menu.

There are eight options to choose from, but it would be almost criminal to pass on that seminal brunch staple, eggs Benedict.

At The Peninsula, the dish is an upmarket interpretation of the Sunday classic: lobster Benedict, topped with a slow-poached organic egg, itself topped with caviar. When broken, the egg releases its yolk over creamed spinach and toasted bread. A champagne sabayon covering it all drives home the extravagance.

If you’re feeling peckish, the pan-seared snow fish is a great choice. The fish comes with poached oysters perched atop barley risotto that’s flecked with asparagus and covered in a brightly flavoured sauce made from lemon nage. Bonus: the fish goes well with champagne.

With endless shellfish at your disposal, however, it’s probably a better idea to go for the Kurobuta pork tenderloin or roasted wagyu rump for your main. While not the most popular, they are the meatiest dishes you’ll have access to throughout the brunch.

If you’re steering clear of meat entirely, your best – and only – option is an organic pumpkin risotto with wild mushrooms. Shaved Parmesan and white truffle oil enrich a plate of apricot-orange al dente rice that would please even the carnivorous.

In what is certainly a twist, the centrepiece of the entire brunch might be its dessert spread.

Tiramisu, macarons, mango tartlets, marble cakes, more sweets served in shot glasses than one body should ever be able to stomach – the sugary smorgasbord is served in the middle of the lobby, practically begging you to grab a macaron or two every time you pass the table.

You wouldn’t be wrong for doing that. The Peninsula’s pâtissiers have a favoured reputation around town. During Sunday brunch, they get a chance to display their impeccable skills across a range of products in bite-sized form.

Before the brunch rebranded, Chinese delicacies from Mei Jiang – one of the best places for Cantonese cuisine in Bangkok – were offered at a station. Since 2015, wait staff have instead brought dim sum to diners a couple times during brunch, offering fresh ha gao, Peking duck, and mini bao at your table. Remember to grab some when the server comes by, if you’re so inclined.

Losing the buffet option might seem to spoil the experience. On the other hand, shifting away from a fully globalised culinary selection makes sense.

Surrounded by choice Western dishes, Chinese fare doesn’t fit, no matter how high-end or sought-after, not when the brunch aspires to a tightly wound concept. Venues that serve every cuisine under the sun tend to lose something in doing so, as well, whether it’s quality or class or simply sticking to messaging.

At Sundays at The Pen, the experience is similar to a table-service dinner. Your glass gets refilled without your having realised it was empty. With waitpersons ready to serve at the raise of a hand, you don’t even have to get up from your table.

The kitchen staff also goes to great lengths to make you feel distinguished. All the mains are premium, plated with the kind of precision reserved for high culinary art.

They come in sizable portions, too, so you shouldn’t leave hungry. But if you’re looking for a free-flow feast – booze, borderless range, and all the bacchanalia associated with decadent brunches – you may not leave totally satisfied.

As far as Sunday brunch in Bangkok goes, Sundays at The Pen adds a welcome alternative to the field. Plus you won’t regret all your weekend fun the following morning.