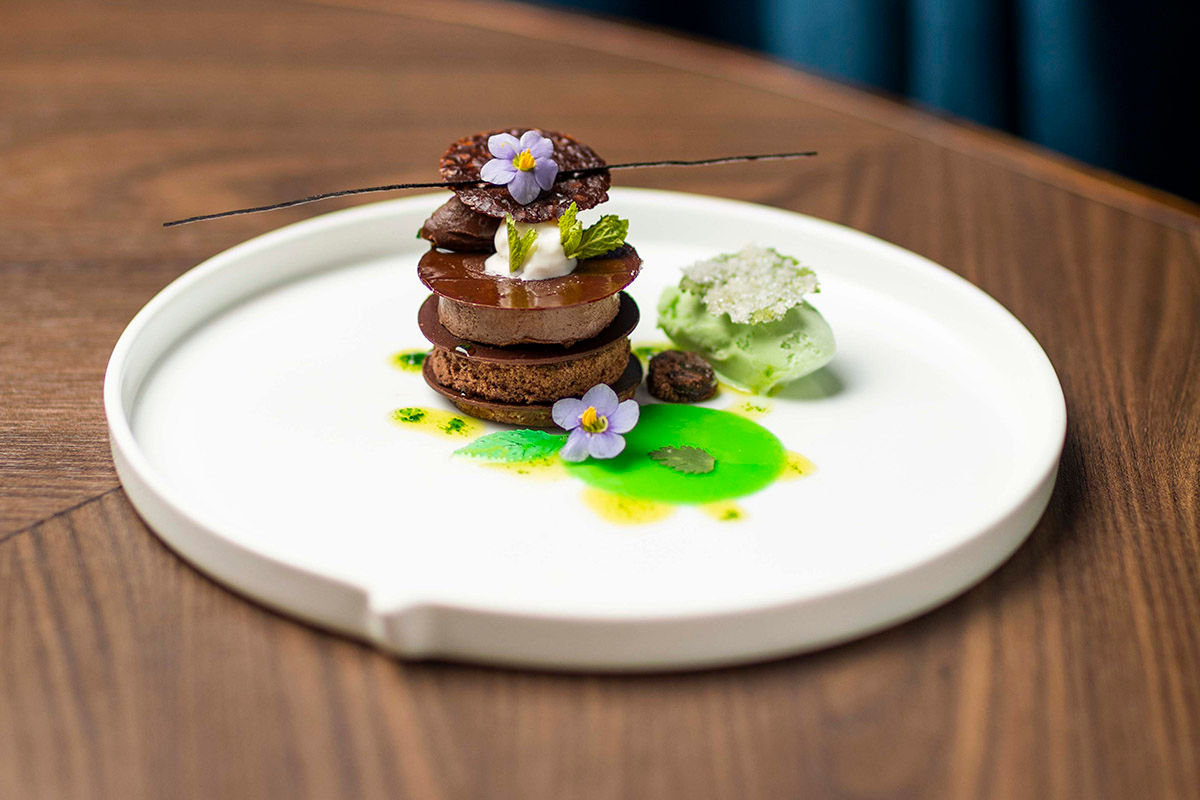 Combining the natural beauty of flowers with the finest of French cuisine, Signature restaurant easily ranks as one of the city’s most romantic rendezvous spots. Prestige stops by for a taste of Chef Thierry Drapeau’s intoxicating ‘floral cuisine’

In the past, when you found a restaurant that ticked all the boxes you almost wanted to keep it secret, telling only a select few to ensure that the place never became overrun with the hoi polloi. These days, however, we shout it from the rooftops when a fabulous new fine dining spot appears on the horizon, if only to ensure that in these challenging times it simply stays in business.

When it comes to Signature restaurant, the French fine dining spot located on the 11th floor of VIE Hotel Bangkok, MGallery, it’s time for the fanfare to begin, as this just over one-year-old gastronomic gem has been too long flying just under the city’s foodie radar (although it did receive a listing in the 2022 issue of the Michelin Guide Thailand). The man helming the kitchen here is Chef Thierry Drapeau, who perfected his craft in some of France’s finest kitchens and eventually opened Logis de la Chabotterie, his very own restaurant in Saint-Sulpice-le-Verdon – which was awarded two Michelin stars for nine consecutive years (starting in 2010).

It was here that he began championing his intriguing “cuisine of the soil” philosophy, which he’s now brought with him to Thailand, having deciding to put down roots in Bangkok. His culinary approach is grounded in sourcing the finest local ingredients and expressing terroir – a sense of place – while delivering light, lively and highly concentrated flavours. And while his dishes feature produce imported primarily from France, Thailand’s bounty of edible flowers and herbs also plays an important role. In fact, virtually every course in his inventive set menus contains an edible flower, which is why his creations have been dubbed “floral cuisine”.

The restaurant’s current ‘Flower Bouquet: Summer Black Truffle Discovery’ menu is available as a five- or eight-course experience (THB 3,750++ / 4,100++), and things get underway as guests are briefly seated in the restaurant’s elegant Art Deco style lounge area. Here they are invited to enjoy a glass of Champagne, and a trio of truly eye-popping canapes. First up, a large carrot lies in bed of greenery, and the holes cut into it hold up for each diner a dainty carrot cone, filled with carrot mouse and a topping of herring caviar.

Next to that, colourful purple cabbage leaves form the backdrop for a pair of featherlight macarons, decadently filled with bacon mousse and Iberico ham. Finally, a welcome drink of frothy jasmine tea, adorned with a single flower petal, is the third and final warning that the evening ahead will be full of some mouth-watering surprises.

For the dinner itself, guests are next led to their respective table, and here – around the bend in this L-shaped restaurant – is where Chef Thierry’s large open kitchen is finally revealed. Flanked on both sides by a theatrical curtain, it becomes the stage upon which he and his capable kitchen team will now perform.

The performance begins with a serving of ‘Potato Cappuccino’, a creamy potato swirl flavoured with black summer truffle and topped with puffs of potato choux. Also detectable, but not listed on the menu, is a distinct flavouring of pork, which the server reveals to be Porc de Vendée – a specialty from the Vendée region of the Loire Valley (where one also finds Nantes, the chef’s childhood home). Adding extra adornment to this dish are several delicate garlic chive flowers, the first in a succession of edible flowers to come.

The gorgeously tender Normandy scallop is next to arrive, having been marinated overnight, steamed for two hours and fried in butter. Served alongside capers, a bounty of herbs and fresh fennel, and topped à la minute with a lemony, peppery sauce, this dish is simply superb. The accompanying flower here is the pinkish-red dianthus (or ‘tropic butterfly’), while the accompanying wine – from the highly recommended course-by-course premium wine pairing (THB 3,200++) – is a 2017 Bret Brothers Macon-Villages Cuvee ‘Terroirs Du Maconnais’ – a marvelously complex Chardonnay blend.

The wine pairing then switches to red – a 2016 Thibault Liger-Belair Les Deux Terres Bourgogne, Gamay-Pinot Noir blend with notes of cherry – as the way is cleared for Aquitaine caviar from France served atop smoked mackerel, with butter and cream, which is garnished tableside by a spoonful of smoked celery espuma. The artful plating here is enhanced with the use of bright blue petals from the bourrache, also known as the starflower.

Seafood remains the star attraction for the first main course – aptly entitled Le Mer – which sees a wonderfully tender fillet of tooth fish served with caramelised onion emulsion, Jerusalem artichoke jelly, and an onion foam sauce. Adding a jaunty splash of red are a few begonia petals, which I have to admit I couldn’t actually discern amidst all the other incredible flavours (including ginger) that Chef Thierry has managed to weave so seamlessly into this dish.

At this point the five- and eight-course tasting menus briefly diverge, with the larger meal including a second main of French duck with foie gras in a Bourguignon sauce, a pleasantly pungent cheese course – gooey chèvre served with apple raisin chutney and fresh ground nutmeg – and a refreshing fraîcheur pre-dessert.

When the time comes for the main dessert finale, the leading lady on both menus is Grand Cru chocolate from Chiang Mai served in a four layered tower – chocolate crumble, chocolate mousse, chocolate foam, and chocolate grenache – together with a scoop of seafoam mint sorbet and a rivulet of mint jelly with coriander. The flower this time, and the last of the evening, is a simple purple pensée (pansy), which offsets the plate very tastefully.

A lot of thought has gone into the making of these mini-masterpieces, and likewise a lot of thought has gone into the creation of the restaurant itself. The room is spacious, but the actual dining area is limited to around 30 or so guests, ensuring an intimate experience for all. The soft, natural earth tones and shades that dominate the interior’s colour scheme blend nicely with both the larger exposed wood tabletops, and the white linen tablecloths on the smaller tables. The lighting has also been carefully considered, creating a cosy ambiance while still providing adequate illumination at the tables (for those all-important IG moments). Topping everything off are the floor to ceiling windows that look out over a glittering Bangkok skyline, making Signature one of the city’s most romantic rendezvous spots.

As I muse on these thoughts and others, our server arrives with the first dessert encore – a pair of white chocolate bon bons made to look like miniature fruits. The first are tiny oranges, affixed to a tiny tree, while the others are bite-size bright green apples resting on a cushion of flowers frozen in ice (which this time are not meant to be eaten).

Finally, the curtain call commences and we are presented with an oversize chocolate egg deposited in a loosely woven bird’s nest. I’m instructed to then hold the egg about two feet above the table and drop it, causing it to break and spill its chocolately contents in all directions. It’s an amusing end to a dinner that’s been delightful and delicious in equal proportions.