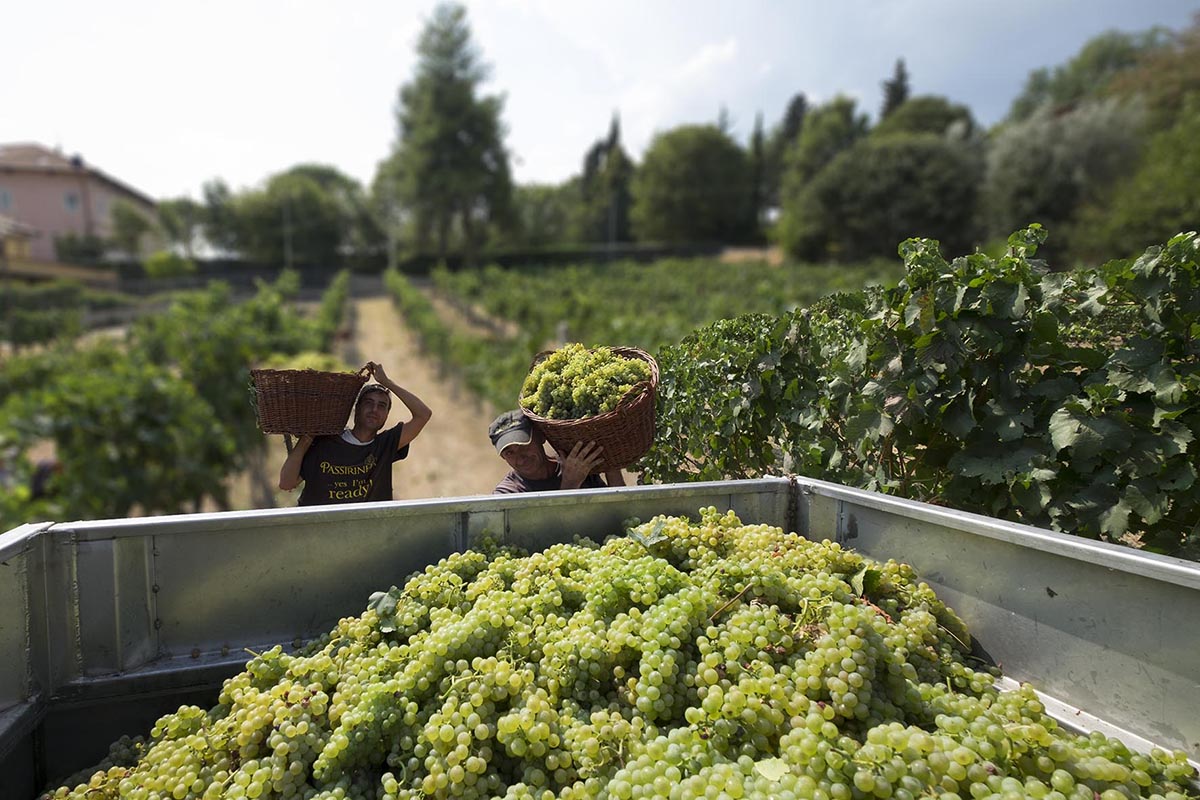 Velenosi Winery was established in 1984 from the strong will of two young entrepreneurs, Angela and Ercole Velenosi. The winery’s vineyards are cascading on hills at about 200-300 metres above sea level, outlined by a valley and the river Tronto. Here, the soil is mainly composed of clay and limestone, making it highly suitable for the production of quality wines.

The heart of Velenosi is in Ascoli Piceno, a city in the Le Marche region that’s rich in history and dates back three millennia. The town is located in the centre of Italy, about 25km from the Adriatic Sea. Besides the four vineyards located in Ascoli Piceno, Castorano, Monsampolo and Castel di Lama, the company also owns vineyards in the municipality of San Marcello, in the province of Ancona and one in Ancarano – in the Abruzzo region – with a total planted area of 148 hectares.

Since its early beginnings, Velenosi wines have gained a worldwide reputation for its exceptional wines, reviewed (and highly acclaimed) by respected wine magazines such as Wine Spectator, Robert Parker, Decanter, Gambero Rosso, Luca Maroni, A.I.S. and many others. The two top reds – Roggio del Filare and Ludi – have been included over the last three years in awards for the best 100 wines of Italy, a special classification by Class Life magazine, which calculates all the points and awards received from the six most important Italian wine guides.

Velenosi mainly grows Marche grape varieties such as Pecorino, Passerina, Verdicchio, Montepulciano, Sangiovese and the aromatic Lacrima. However, they also have a few hectares of international varieties such as Cabernet Sauvignon, Merlot, Pinot Noir and Chardonnay. Velenosi’s products range from sparkling to dessert wines, from important reserves to simple yet pleasant wines served in cafés, wine bars, Michelin-star restaurants and cocktail parlours.

Among Velenosi’s winemaker consultants are Attilio Pagli, counted by Decanter in the July 2015 edition among the world’s best 30 winemakers, and Cesare Ferrari for the sparkling wines. All the wines share the same philosophy: be connected to tradition, modern in style and offering a great quality and price value.

The mastermind behind the success of Velenosi wines is co-founder Angela Velenosi, who was only 20 years old when she founded the winery that would soon become the biggest family-owned winery in Le Marche.

“I started this work with all the innocence of my 20 years of age,” Angela recalls.  “I had no experience but I thought I could do it alone, starting from scratch. I did not have a family and I had no one to give me financial support. I could only rely on my own efforts. I believed in sacrifices and determination, but I was never driven by ambition. Rather, I have always pursued my dreams and done everything I could to achieve them, one at a time. Most definitely, one of these dreams was to turn my land, at that time not very famous, into an internationally recognised terroir.”

In 2014 she was elected president of the Consorzio di Tutela Vini Piceni, which is the association of wineries of the province, and in 2015 she was chosen as testimonee for the Le Marche region at the Expo in Milan due to her life-long commitment to quality wine production.

The winery produces 2.5 million bottles per year and now exports to 48 markets across the globe. Among Velenosi’s stellar products are Passerina Brut that recently won a gold medal from the “50 Great Sparkling Wines Guide”, Verdicchio dei Castelli di Jesi DOC Classico that received a gold medal at the Port of Wines Festival in Nova Scotia in 2015, and the multi-award winning Brecciarolo Gold Rosso Piceno DOC Superiore.

Now in its 33rd year, Velenosi has established itself as one of the most respected winemakers in Italy – a household name that stands for quality, consistency and uniqueness.

“Velenosi is my great inspiration,” Angela Velenosi exclaims. “Everything I put into my job comes back to me in the form of incentives, ideas and inspirations. I really would not have the energy without my job. I like to consider it a work site which is always open; we are very creative and we never stand still. If you give love you get love back. If you take care of your vineyards, starting with the grapes, without ever losing sight of them and without neglecting them, you’ll end up with good wine.”