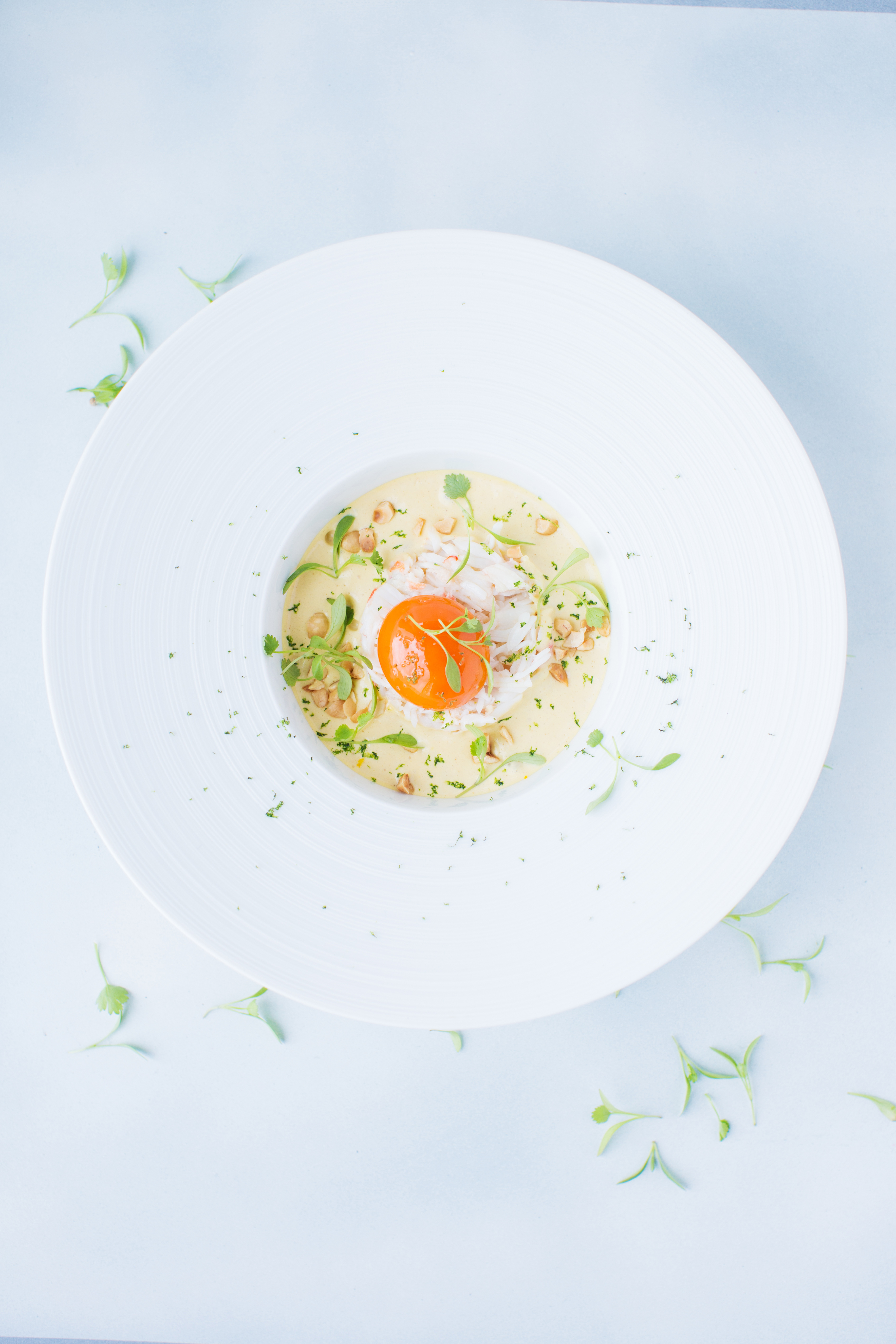 I am seated deep in five-star territory, in the private back cavern of one of Hong Kong’s most reputable French fine-dining restaurants, surrounded by one of the most comprehensive collections of wine and cheese (the twin staples of the French diet), and I am having laksa. And that’s not all that’s on the menu. From this, we move to a modest dish of skate wing. An alternative version of spaghetti carbonara. A Portuguese bacalhau. A palate cleanser inspired by the Hong Kong dessert of mango and pomelo sago soup. And a sweet ending — I don’t know what exactly is in it, but there’s yuzu, there’s lime and lemon, and do I detect a hint of chilli?

By the time my meal is over, the most “French” thing I’ve had is the flute of blanc de blancs that opened the meal, and the double espresso that ended it. Just what in the world is happening at Caprice?

Whatever it is, it’s the fault of Guillaume Galliot, or a man I’d like to call the happiest chef on earth, and who joined Caprice just a few months ago, fresh off a gig in Macau’s much vaunted three-Michelin-starred The Tasting Room, and whose experience includes serving dignitaries in the Chinese capital. When my lunch, and his service, is over, he saunters into the room, Coca-Cola in hand, pulls up a chair, and begins to talk about his wife, Juliana, who hails from Singapore and whose mother makes a bad-ass laksa. Not that she’s ever given him the recipe.

“The original laksa is a noodle, a stock and a gravy sauce, and one day, I was eating this dish, and I decided to do something with the gravy sauce. The first time I did the test, my wife came to eat in the restaurant with two friends. She tried it and she said, ‘what is this?’ I said, ‘laksa’. She said, ‘This is not laksa at all!’ It was a big fail. The texture didn’t work at all. It took us one month to make it perfectly.” Galliot’s final laksa, called “The work of my journey to Singapore: The Laksa with king crab, confit egg and Sudachi lime”, which has become a signature since its invention a year ago, uses crab and a laksa-flavoured espuma, doing away with the broth and noodles. It’s not traditional, but yet it’s French, and when I taste it, unquestionably so.

Galliot isn’t a rule-breaker or a freedom fighter, more an evolved cook who has little use for the idea of boundaries and bureaucracy. Where Parisian Michelin star-gazers prize tradition and formality, he looks to adaptability and adventure.

Galliot’s first signature dish, which has just joined the Caprice menu, is live Japanese abalone presented carbonara-style with 36-month Pata Negra ham, which came into being 10 years ago in Beijing, when the chef sought to utilise an ingredient beloved by government officials in face-giving prandial parades. Confused by the ingredient in its usual form, he cut it into slivers and blanched it, and then looked at it, and thought “mini pasta!” If taking Asian concepts or ingredients and bending them with his French will was all he was doing, I’d call him a fusion artist. But there’s more to it than that. The skate wing he’s presented is easy eating, but rich and luscious, not a poor man’s fish, and Galliot tells me it’s a dish he’s adapted from one his father loved. It’s not an everyday ingredient used at the Four Seasons Hotel, but sometimes, he orders it anyway. Ditto a squid, which he serves a la plancha table-side, with tomatoes or zucchini blossoms and beaming pride. In some ways, serving ingredients as humble as these when patrons are expecting foie gras and truffle is even braver than experimenting with Eastern philosophies.

“What is the expectation of people going to a French restaurant? It really depends on the cooking style of the chef,” explains Loic Thomas, the hotel’s assistant manager of food and beverage, who runs the dining room flawlessly with equal parts knowledge and charm, and zero parts stuffiness. “If the chef can impress them, then they forget ‘traditional French cooking style’.

“We explain, we have a chef from the Loire Valley, but he has been travelling for 30 years in Asia. That’s the best thing you can do for a guest who comes with high expectations: turn his dining experience into something he didn’t expect at all. What I like with Guillaume is he doesn’t go too far when he’s using Asian products. He never crosses the line and gets lost in translation. It’s pure, it’s tasty, full of flavour.”

For me, a chef’s mark is made in memories. I have probably tasted a hundred beef tartares; not a one has lingered like Caprice’s version, which throws Gillardeau oyster into the mix with hand-cut Australian Wagyu, and a smattering of caviar as a topper. The left-field ingredient – oyster– is a naughty one, but adds a purposeful salinity that’s so nuanced and natural I can’t believe I haven’t seen the combination before.

How he does it isn’t a formula. Like most chefs, he can be seduced by an ingredient; unlike them, he also admits to often being inspired by bad food. “A lot of times I go to a restaurant and I think, oh, why did you do it in that way? It’s not good. I imagine that product, but in a totally different way, and then I work on the idea that I get.”

And often, he has no idea where he’s going at all. There’s freedom, but then even more importantly, there’s instinct: “With the eight-course [Carte Blanche tasting menu], before you have the fish we have one or two courses, and the staff start to worry. ‘Chef, how do you want to do the fish?’ And what is the answer, usually? I don’t know yet.” Galliot laughs. It’s mischievous — and certainly makes life frantic for Thomas, who adds, “It’s a big challenge, because sometimes we don’t even know what cutlery to put, or we need to change it last minute” — but in reality, it’s exactly what is bringing Caprice back to its former glory, and then some.

The restaurant, which held three Michelin stars when the guide launched in Hong Kong and dropped to two under the guidance of staunch French traditionalist Fabrice Vulin, has never been wanting for covers, but with a dream team of Galliot, Thomas and Victor Petiot, a newish sommelier from the storied halls of Four Seasons George V, now in place, it’s poised to really turn up the volume. Much has been made of the chef swap that occurred between Caprice and Tasting Room, where Vulin now works, but in my mind, the story isn’t which hotel poached which chef first or who’s gotten the better deal (although we media love a good kitchen scandal). It’s what’s happening on the plate, and in my belly, that’s worth writing about.

“What’s going on quite often with Victor, he tells me, this table, they take the eight course, but they took this bottle, chef,” says Galliot. “So we try the wine. I was supposed to do a fish with a fish based-sauce, but unfortunately they have a Pinot Noir from Burgundy, it will not match. So I say, bon, let’s change to keep a fish course, but with more of a mushroom base. Maybe the guest won’t realise if you serve him the wine with a bisque with a fish base; he will say wow, it’s great. But in our minds, Victor’s mind, or my mind, we would lose the game on that dish.”

“That’s the big difference,” explains Thomas. “He likes to cook for people; he doesn’t cook for himself. There are so many chefs that cook for themselves. They’re a bit selfish. And if people don’t like it, then they don’t respond very well. He’s totally different. He’s always looking at the tables from the corner of the kitchen. He loves his job. He loves people, he loves to interact with people. The thing he wants is to make people happy.

“The atmosphere we have: you can see that Caprice has changed. The guy’s always joking, laughing, singing – sometimes we have to remind him that he’s in an open kitchen!”