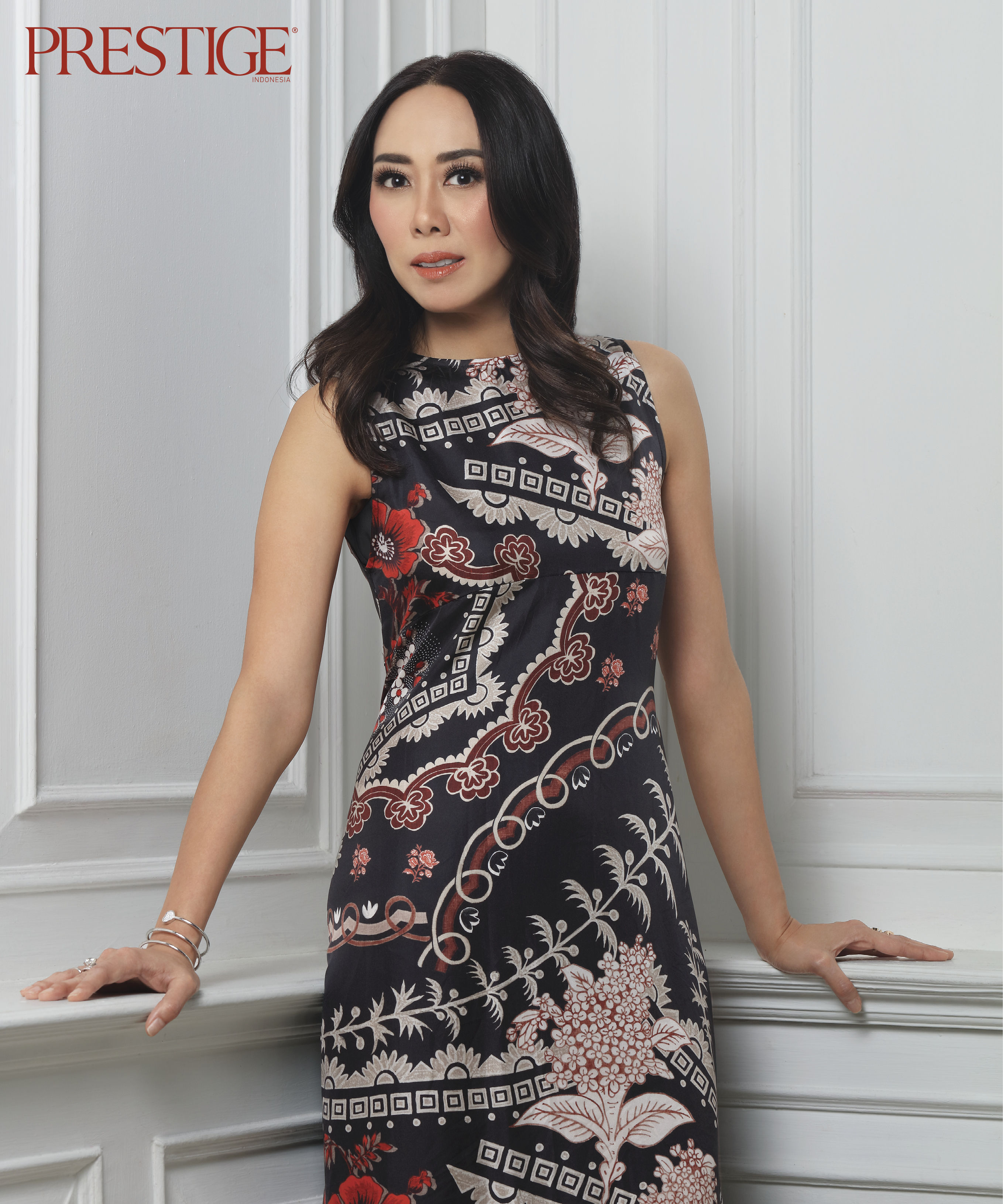 Things have changed quite a bit since the last time Prestige talked to Esti Nurjadin about her new role as Chairperson of Yayasan Jantung Indonesia. For instance, the heart foundation now has a new brand ambassador, the actress, model and musician Mikha Tambayong, and it has formed a new Millennial Heart Squad, a team of young and brilliant people to promote healthy lifestyles among their peers. The idea of collaborating with Mikha and creating the squad is to try to have a positive influence on the thinking and lifestyle choices of the young.

“We chose Mikha because she lives such a healthy lifestyle herself,” says Esti, whose tremendous enthusiasm for her new role is evident from the moment you meet her. “When we approached Mikha, she immediately said yes to the opportunity to join us and support our mission. It’s a great connection and I believe she will be a great spokesperson to the millennials because they can relate very easily to her. They speak the same language, they understand her. I feel like it’s a very good option to have her on the team.”
The foundation is still in the middle of a transition, Esti says. “This is our third month. I think in every organisation, where changes happen, there would be some difficulties and challenges at the outset. But we’re committing ourselves to the new changes – a new campaign, new communications, more streamlined structures.

“We will definitely speak more to the millennials during the next five years. We will develop campaigns for the benefit of children as well. We will try to emphasise in our campaigns to eliminate underage smoking and also to communicate the truth about cardiovascular diseases to millennials.”

Underage smoking in Indonesia is one of the most worrying health problems facing the nation. The smoking prevalence rate among teenagers under 18 increased from 7.2 percent to 8.8 percent in 2015. In 2016, 54.8 percent of males between 15 and 19 were smokers in Indonesia, according to the Health Ministry.

“It’s frustrating because coronary heart disease is 100 percent preventable,” Esti declares. “If you smoke, if you eat junk food, unhealthy food, they’re big factors for the disease. Inactive lifestyles and obesity are also some of the factors. It’s a lifestyle disease that you can avoid.

“But, of course, when you’re young, you think you can live forever. You think you’re far away from the disease, when you’re actually not. That’s why we create campaigns to educate young people, to do it as early as possible so they have an awareness that they can grow into.”

Many people don’t realise that heart disease affects women as well as men. “It’s a common misconception to think that it’s a men’s disease,” Esti explains. “Actually, it affects the females during their child-bearing age as well as after menopause. At first, I thought it only affected women after menopause, but recent studies show that women of child-bearing age, which is around 23 to 40, are very prone to cardiac disease. It starts off with hypertension, especially during their pregnancy, and people brush it off because they thought it was because of the pregnancy. Pregnancy spiked it up, and if it’s not taken care of it could be very dangerous.

It is, of course, never too late to adopt a healthy lifestyle. Esti says that even if you have only just started, keep it up. “Stay away from cigarettes,” she pleads. “I know it’s quite difficult sometimes, but try not to be a second-hand smoker, because it’s as bad as smoking a cigarette. As for diet, I believe that everything in moderation is good. Don’t torture yourself to eat something you don’t like. Just don’t eat unhealthy food too much. Also, try to exercise and stay active. Take it slowly at first, then you can take it up to the next level as your body adjusts to your new lifestyle.

Try to manage your stress. I know that in this modern day stressing at work, at school and even on the road is common, but at least you can manage it. Go to the doctor for check-ups, so that you know where you’re at and so you can obtain treatment right away if any disease is found. I suggest you do it maybe once every two years.”

Her husband had bypass surgery at the age of 42, and she grew up with her father having diabetic problems. She saw him following a very strict diet, doing all the insulin injections. It’s for those very reasons that the owner of D Gallerie in Jl. Barito grew up to be a very health-conscious person.

“I don’t want to grow old having to do those things,” she says. “I’m trying to instill the healthy lifestyle, although I don’t have any special diet. I just try to balance my eating habits. Everything in moderation, as I said. For example, if I have been eating a lot in the afternoon, I try to reduce my portion at dinner. Or, if I have been eating badly for a few days, I shall try to eat more healthily in the next days.”

What about exercising? “Sure, I do exercise as well. I used to do yoga, but now I do Pilates more and I have my own personal trainer. Of course, sometimes with the busy schedule I have, I skip working out. But I try to work out at least three to four times a week. I always hit the hotel gym when I travel. It’s a great way to recover from jet lag.”

Looking back to the time she became the new head of YJI, Esti confesses that she was hesitant at first about taking on the responsibility. “When I was chosen, I was amazed, and I said to myself: ‘Why me?’ I felt as if I wasn’t ready. I felt like maybe there were other candidates who could do the job better than me. But, apparently, the board wanted me to be the new Chairperson and I thought that if I said no, then maybe there would not be any change in the foundation. I thought it was a good chance to revamp the foundation, to make it more current. I feel that in accepting this role, I will have an opportunity to speak to a bigger community for a good cause.”

Change is good. It’s the only constant in the world. Esti admits she wasn’t confident at first, as she has always been so different from her peers. “If I could say something to my younger self, I would tell her that it’s OK to be different,” she says. “I’m not from a medical background, but in the foundation I deal with so many people who are. I work in the art community as well, even though my background is in law, so I’m always different either in my business and in my volunteer work! It was a challenge, but now I feel OK about being different. It’s all right to be different, because it will bring a new perspective.

“I also would say that I myself should live more healthily. I feel like I try hard enough now, but if I had started earlier it would be better. Another thing, I would also tell myself to stand up for myself if there’s something that’s not right and not to be afraid.”

Esti’s other passion is art. Her father, Aswad Dipo, founded D Gallerie in 2001 and later handed its ownership and management over to his daughter. “This year, we will do a residency programme,” she says of her beloved gallery. “And we’re going to invite an artist from Kuala Lumpur to do that. We try to make exchanges of artists each year, so maybe we will send an Indonesian artist to Malaysia. A residency programme is where the artist lives in an unfamiliar place and stays with a local artist, so they can influence each other. Once you have experienced a residency as an artist, you will be inspired by your stay there to make something out of it.”

Wrapping up our conversation, Esti talks about her hopes and dreams for the years to come. “For the foundation, it’s a work in progress. There’s still a lot of work to do and we’re going to revamp a lot of things. We are trying to repackage what we do in different ways, so that it’s more current and fresh for people. We try not to do too many things, but to develop doable and sustainable initiatives. As for myself, I just hope I can be a good leader in my communities. I hope I can be a good example to a lot of people.”