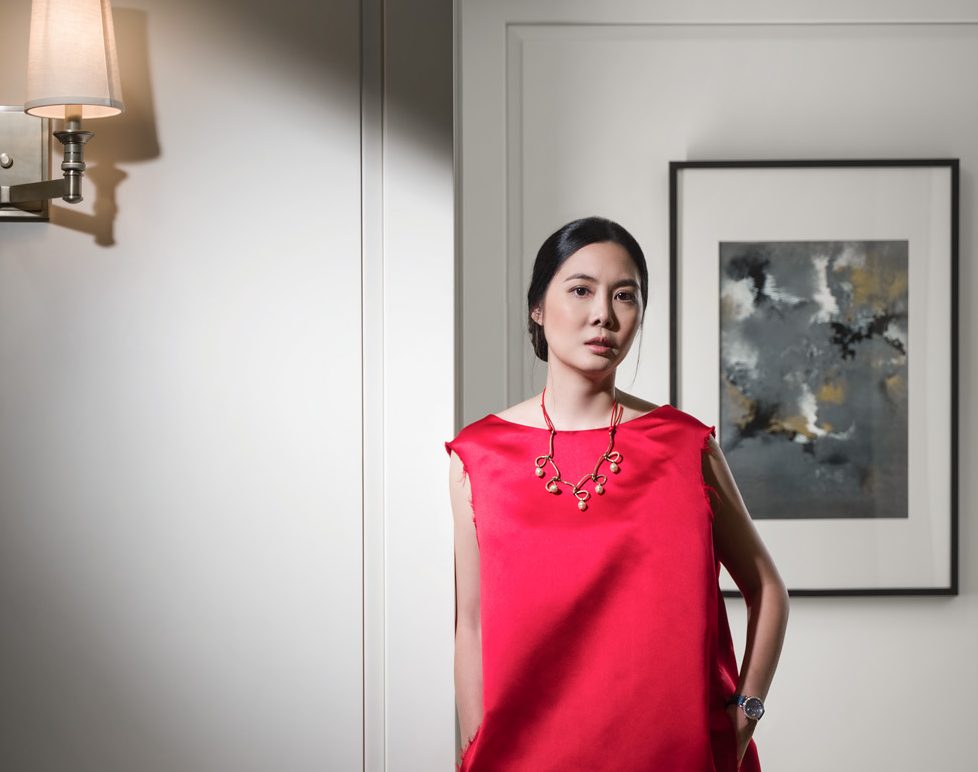 “I don’t consider myself as someone living a luxurious lifestyle,” says Pim, who is the assistant school manager of Bangkok International Preparatory and Secondary School, AKA Bangkok Prep. Pim and her family make their mark on society in a different way, both behind the scenes and on the national arena.

It begins with her parents, who are well-respected in Thai society. Her father is Associate Professor Dr Tortrakul Yomnak, head of a sub-committee in the National Anti-Corruption Commission and also a chairman of Tortrakul & Associates Consulting Engineers. Her mother, Patrada, is an education expert, having founded the beloved kindergarten, System’s Little House, and Bangkok Prep. Brother “Nick” Torplus recently completed a PhD in Development Studies from the University of Cambridge, UK, and co-founded HAND social enterprise, a consulting agency on good governance, while holding a full-time job as a lecturer at the faculty of Economics, Chulalongkorn University.

We’re in the large, airy offices of Bangkok Prep’s secondary school campus, a short distance from Phra Khanong BTS station. It’s an expansion of the original Bangkok International Preparatory School, which began as a primary school. Both schools were founded by Pim’s mother as well.

Pim leads teams who support the schools’ management and administration, from procuring learning-friendly furniture to overseeing security. She makes sure that when the teachers, staff and students get to school, they feel productive, safe, and happy.

“The idea of contributing or giving back to society doesn’t always need to be at a national level, but within your own community… here at school, every day, I’m fulfilling this,” she says.

The first Bangkok Prep campus came about organically, over a decade ago. Parents at Little House kindergarten, founded by Pim’s mother, pleaded with her to establish a primary school. As a result, Patrada founded an extension near Thong Lor for the children to attend. This soon evolved into Bangkok Prep, and its offshoot, a secondary school campus, opened its doors a few BTS stops away just last year.

The extra land permitted by moving a few stops away is amply justified by how expansive the layout is. The campus simply breathes – the open spaces, modular furniture, large windows and unfussy design elements indicate room and space to grow, figuratively and literally, for the students.

There is an Olympic-size swimming pool, a black box theatre with all the requisite equipment, library (with bean bags, of course!), sports courts, classrooms that seem more like interactive learning labs than the study prisons we imagine of schools – and far more.

Although the schools were founded by her mother, Pim’s career path to her current role wasn’t a direct one, nor did her parents set a strict line for her to toe. At one point, she even considered becoming a filmmaker and living in the US.

“My parents always told me, you can do anything you’re good at. No matter how small that job is or how insignificant you think it is, if you love it and you do it well, you will be successful,” she recalls.

After spending her childhood in Bangkok, she went to an all-girls boarding school in Wellesley, Massachusetts at age 15. She graduated from Dana Hall High School with a deep interest in human rights and politics. During her junior year summer, she returned to Bangkok to intern with then deputy prime minister Khunying Supatra Masdit.

After graduating from high school, she headed to Washington DC’s George Washington University, where she studied at the School of Media and Public Affairs’ Communications department. Perhaps she could be a journalist, or report on politics, she thought.

Because the school also taught mass communications courses, Pim began to explore her creative side. A year away from finishing her Bachelor’s degree, she wanted to be a filmmaker. She looked for jobs in film production, a change from her younger self’s plan of going into politics. “I applied to MTV and Walt Disney,” she says.

Then 9-11 happened – and things changed again. For DC-based Pim, her classmates, teachers and school, one of the attacks that resulted in an airplane crashing into the Pentagon little more than 5km away was an immediate reminder of their vulnerability. Her university publicised plans to move campuses in case of another terrorist attack, to Syrcuse, they thought, or Ithaca.

Pim graduated a few months later, in a country still in shock and with employment precarious for anyone in the US. She returned to Bangkok to a two-year stint as junior account executive with Ogilvy & Mather. When Little House grew into Bangkok Prep, Pim joined the team.

Education, she soon learned, was markedly different from the corporate world. Pim worked with a variety of people from different cultures, and there were challenges.

“When you’re very young, you don’t have enough experience, so maybe it’s a disadvantage,” she remembers. Along the way, she earned a Masters in Marketing from Thammasat University, and at one of her expert educator’s behest, a second Masters in Education at Endicott College, in Boston, Massachusetts. Working with educators, she needed to understand the needs of faculty, students and other staff, and nurture them accordingly.

“Even if you’ve got the best interior architecture, you must have one person to liaise with the teacher. This person needs to understand both the educational and aesthetic aspects, bringing it together. Because the designer can sometimes give you the most amazing design, but it’s not practical for education.” She adds later, apropos of her degree in education, “And you must have someone whom teachers respect, and they must trust you.”

Last year, when the secondary school opened, they had a total of seven students in their graduating class – one for each teacher. The school administrators kept going. They were confident about their little school. This year, between 50 and 60 students are in the graduating class, Pim notes proudly.

We take a tour of the school. There’s the library, complete with activity rooms, fronted by tall windows and with moveable tables inside. The tables and chairs can be turned into round tables, a discussion space, a more active, empty space in the middle, or the more traditional class.

Walking past a classroom, it’s intimate and bright, ample space for a class of a dozen or less. A student is taking an exam, scribbling furiously. It’s peaceful, rather than prison-like.

“When I see the idea of a new learning space, or new state-of-the-art learning facilities, my heart pounds. I get so excited!” Pim says. “That’s important, because I know what would make students and teachers excited, and we work together.”

Pim splits her time between work at the two campuses, mostly at the Thong Lor location, and home. Her brother lives in the same compound as her family and her parents, and so they rotate visits with each other. Work, and home, she says, are her daily rituals. Spare time is a luxury. “Doing nothing is a luxury!” she laughs.

School life is a triathlon, Pim says: “Just when you are about to run out of your last breath… there’s school break. Then you rest and get ready for another course.”

It’s all in due course, she says, of being the parent of a young child. Pim misses being more active, like during her tennis-playing days, when free time was more readily available. Massages, gym time – the hours once allotted to them are dedicated to Pippi and her family now.

Once an active member of Thailand Young Philanthropists Network, she remains as involved as she can despite her ongoing responsibilities with the schools, studying her Masters degrees, raising Pippi, remaining in the loop and donating regularly.

Pim also reveals she misses something a bit more frivolous – those gorgeous high heeled-shoes she cannot resist buying. A self-admitted shoe addict, Pim is brand-agnostic, buying whatever she feels suits her tastes at the moment. Many of the brands she enjoys are Australian – practical, stylish, simple. An outfit may seem plain, but should the shoes be scruffy or sloppy… Pim shakes her head.

“Sometimes I’m just so into shoes, I’ll buy them and just put them on a shelf and say, ‘So pretty!’ And I wear them once a year…”

Last December, Pim and Wic went to the Maldives for a romantic getaway, just the two of them. They spent about four or five days luxuriating on an island, utterly private… and utterly activity-free.

“We wanted to optimise our time by doing nothing. Sunbathing… and doing nothing,” she gleefully reveals. “No kid for a bit!”

Reflecting on Pim’s evolution from a young adult to her current role as a leader in administrating a school, she seems to have come full circle, returning to her deeply instilled value of always giving back to society. From politics to film and advertising and back to education, it wasn’t a direct route, but it brought her to where she belonged. It seems it was a necessary route.

“When you’re searching for your role… the more you explore, the more well-rounded you become. The more interests you have, like politics or fashion, it means that you have a [variety] of world outlooks, more multi-tasking.”

“When I see big smiles, or how happy the kids and parents are… although it’s a much smaller scale than the national level, that’s the definition of ‘giving back’ for me.”

Sign up to get the latest luxury and lifestyle news delivered to your inbox.
Jinda Wedel

璀璨年代 An Era of Bright and Luminous