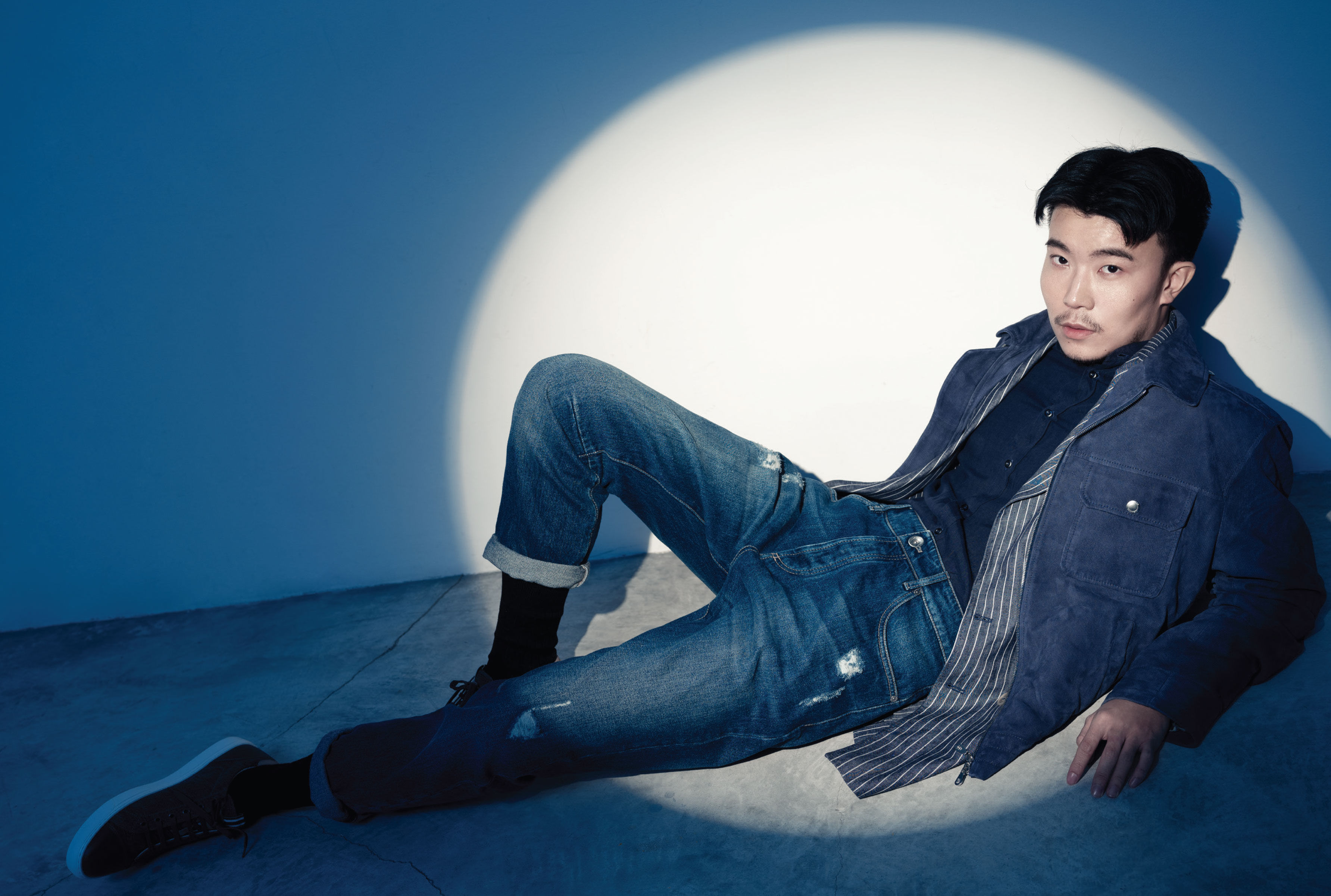 Not many 25-year-olds can open a museum and anticipate art’s global cognoscenti of dealers, collectors, gallerists, owners, digital platforms and venerable institutions to be watching every step of the way with breathless anticipation. So it is with one of China’s millennial calling-cards, the dynamic artrepreneur of style and the aesthetic, Michael Xufu Huang, and founder of Beijing’s X Museum, which opens next month.
Huang exhibits soft power on a prolific scale, and his creative ambition encapsulates both the country’s newly wealthy seeking a richer cultural life and those legions of newly influential digital hipsters whose minds are both more open and more international than their forebears, and more concerned with high class and good taste than just riches. Huang is digital marketing’s content It-boy nonpareil and he’s riding the now-and-future wave array of electronic excitation that World 2.0 has become. And a Great Wave it is.
Despite his being a mere spring chicken of a lad – and a mighty stylish one at that – this isn’t the first time Huang’s initiated such a venture. In 2014, he co-founded what’s become the much-lauded M Woods non-profit private museum in Beijing’s 798 art district with Wanwan Lei (former model for revered Chinese painter Liu Ye) and her husband Lin Han (a prolific collector) – the couple’s fame and network lends them glowing digital celebrification.

The trio wanted to bring experimental and international art into China. Their collective mantra was squarely aimed at luring a younger generation of Chinese into museums so they might adopt art as a hobby and grow a lifestyle with it. And rapidly came the expectant eyes of global art’s jet-set. And yet, five years on, despite art’s percolation and greater popularisation in China, Huang is choosing to move on at what seems like the pinnacle of success. Why?
“There’s a few reasons,” he says between changes of costume during our shoot. “First, I think I’m quite disappointed with the Chinese museum scene, in terms of everyone doing Western-themed artists.” Huang doesn’t deny that such exhibitions are publicly important for art education and has actively promoted them in the past (Andy Warhol, for example) with M Woods, he just can’t reconcile how that leverages 2020 China’s influence in the global art world.

“Form the New Norm,” goes his X Museum mantra, and like millions of his millennial peers and looming Gen-Zers, he’s in a rush to expedite this century’s geo-cultural shift via scroll, in the blink of an eye and the
“Like” of a social-media post. “I just want to show that we’re not like a typical museum. Yes, we’re starting with a collection, but the whole idea is to cultivate new talent.” Huang explains that currently there’s no such mechanism in China to help nurture young artists in such a way. Thus, he plans “to help them build their career and gain them more international attention”. He pauses. “I think that’s something I cannot resist – to show people how curious we are and why it’s important that we’re here.”
Huang has been continually travelling, (he was in Bangladesh prior our meeting in Hong Kong and flying to London the following day) and claims never to have much time to read long-form art-world articles. “I never have any time. I’m a workaholic,” he says. Little wonder given his remit. For X, he’s overseeing programming, development, promotion and more. “It’s like my baby,” he jokes. “I do everything for it.”
X Museum is a two-storey building in the city’s Chaoyang District orchestrated by Beijing-based Korean architect and designer Howard Jiho Kim, who oversees the studio TEMP. Huang’s opening exhibition How Do We Begin? , which forms the first part in a triennial, consists of 33 artists who espouse the millennial zeitgeist, and is curated by London Royal College of Art graduate Poppy Dongxu Wu (@poppydxwu). “This is her first exhibition in China,” says Huang, almost matter-of-factly, “and she’s doing a really good job. She’s from an architecture background too which is good for our multidisciplinary viewpoint.”
As counterbalance, Huang has assembled a glittering jury who will award a cash prize, consisting of Hans Ulrich Obrist (Serpentine Galleries, who says that Huang’s “immense curiosity” never ceases to amaze him), Kate Fowle (director of MoMA PS1), Zhang Zikang (Central Academy of Fine Arts, Beijing), and Diana Campbell Betancourt (Samdani Art Foundation). Looking ahead he also foresees digital projects. “I’d like to do curatorial projects online because the physical space can only allow you to do so much – like one or two shows at a time. There are also so many good curators I want to work with in China.”

While Huang grew up and schooled in London and went to the Tate Modern every weekend to learn more about getting into the profession, his art epiphany came in the less likely art milieu of one of the Tate’s satellites. Holidaying – in fact he says he was camping – with friends in the seaside village of St Ives, southwest England in 2012, Huang discovered the Tate St Ives showing American artist Alex Katz’s seascapes and beach scenes and went to take a look. “What got me hooked is when I went to Tate St Ives, and Alex Katz, everything clicked in my heart. This was like a revelation, and you feel it’s a part of your life. It made me extremely happy and meaningful.”
It’s curious that Huang succumbed to the leisure and recreation of Katz’s work, the American’s high-intensity art paintings being defined as they are by an economy of line and indulgence of style, along with their cool but seductive emotional detachment. That could be a description of Huang. Influenced as much by style, fashion and music as by art history, yet still classical at heart despite the “now-y” vibe. Katz’s sassy show, appropriately enough, was called Give Me Tomorrow.
Poet, writer and University of Pennsylvania professor Kenneth Goldsmith taught the undergraduate Huang, who sat in on a grad seminar he was teaching in the art department, which Goldsmith describes as a “free-form discussion group about issues of the day”, and Huang also took a class Goldsmith taught about fashion theory and creative writing. The Ivy League professor recalls Huang’s unusual “X” factor. “He was perhaps the most unique student I’ve had in the 15 years of teaching,” he recalls. “He would saunter into class wearing furs and designer sunglasses, hanging on every word I said, taking in every bit of information about art, literature and music I had to offer. He was very quiet but very engaged. He cast a spell on myself and all of the other students, who at first were a bit perplexed but in time came around to adore him.”
How does the X man see himself? “A paradox,” he says, managing to reference an “X”. Personality-wise, I’m quite aloof in some ways. I like to have a lot of ‘me time’ when I can. I don’t like to socialise or be too public. But nowadays if you want to do anything you have to be present, so it’s like a paradox. You want to be real, but there’s that sense that your platform or social media is just curated or performed. It’s not the real you. And then you have to say what’s politically correct; there’s what you believe in, or what you have to believe in.”

In retrospect, Huang, despite his “cool for Katz” epiphany in St Ives, England, thought the London galleries too inaccessible and “too posh” in their ways at the time he was growing up. “London galleries are more distant if you’re young. It’s easier to access art spaces in New York, and that brought me into the community, and I became more involved. It created a sense of belonging and that definitely helped.”
Goldsmith recalls a conversation he had about what Huang might do after graduating. “I do remember one time talking to him when he was considering going into tech after school. I told him that although he’d undoubtedly make a lot of money, the art world would be a lesser place should he not pursue it. We’re all glad to he took my advice!”
Despite the classicism, Huang, like many who’ve grown up in his generation, follows what’s called “Post-Internet” Art. “I’m very interested in Post-Internet Art. And I want such artists to come to China – there’s such a lot of material people can use in China, and post-internet art in a China context.” How does he define such Post-Internet Art? “It’s art dealing with tech, digital, industrial materials; for our generation it’s something we grew up with.”
How does he assess the legacy of contemporary Chinese artist Cao Fei, whose first major solo exhibition Blueprints is showing at London’s Serpentine Galleries until May 17. “For me, she’s not really my generation, but she has set a tone for Chinese art. She’s probably the first who represented China globally and challenged everyone’s perception. I think the new generation in China are now very international.”
Which in Huang’s generation means a huge number of people that have studied abroad and have a global vision. And even those who didn’t. “Everyone is pretty educated now, the education system is good, English is very good, everyone is curious. Like film, and music, or even #Metoo,
people see that and its global effect. And with that, Chinese institutions can have influence globally now.”

So far Huang’s X Museum is generating all the right noises. “I think we’re already generating a lot of fuss, and on digital and social media, people are excited about it, people are talking. It’s also word of mouth; we bring out the community of real talent and of course they have their own communities. I think it’s just a matter of time. We also have fashion people, brands I want to collaborate with, and sponsors.”
“You know our slogan is ‘form the new norm’, and I think we’re doing that and I always see the art world as a challenge, I don’t follow all the institutions, I do what I think I should do, and what I think is correct. You must believe what you believe in and there are so many paradoxes along the way. We want a new generation of art lovers and supporters and people who influence society. So I’m very grateful they are on this journey with me, and to have this power in China. After all, why do expensive shows that don’t give us any benefit. I don’t believe in that.”
What will be his own definition of success? “When I can retire without worry,” he says. “When the programme and the institutions are good enough and the team is running itself. That’s my dream of success.” And then he gets objective about his situation. “But, if there’s another young person, then I too would question how legit they are, how serious, as anything new takes time to get used to. At least people are used to me already and aren’t surprised when I call up with something like this. And the result has been phenomenal”
I ask if there’s anything he hasn’t shared he’d like to convey before he saunters off to ride and drive the wave of his ambition. “It’s mainly about taking our power back and the new generation doing something interesting with our own content. I think that’s the key.”
And President Xi? “We would really like him to come, and I hope that when we do well he would want to come.” From X to X, the geo-cultural future starts here.