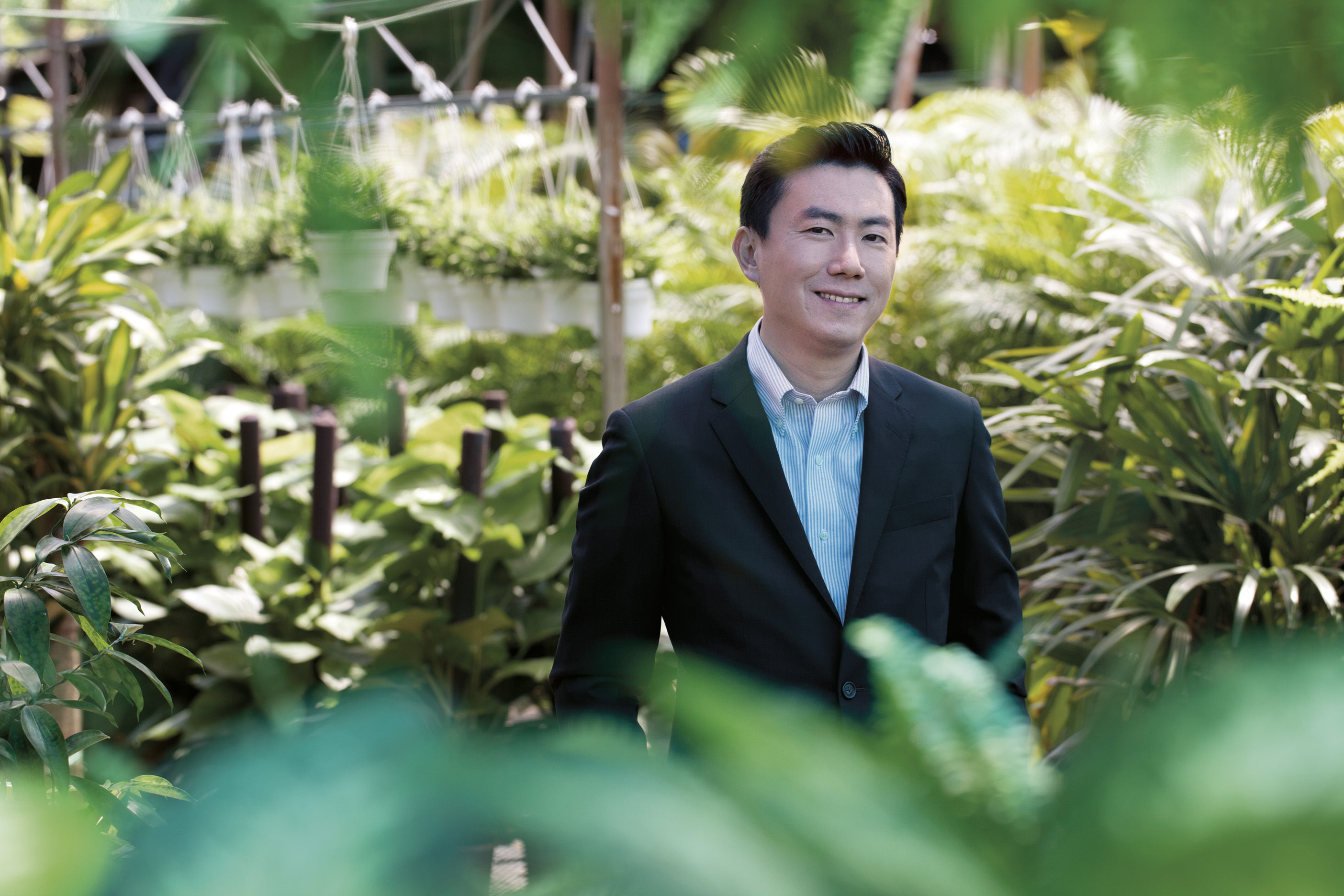 To celebrate Singapore’s 52nd birthday in August, Gardens by the Bay brought back its annual Orchid Extravaganza with a spectacular display of more than 10,000 plants from 80 species of orchids. But rather than bombard spectators with an explosion of blooms, the landscape in the Flower Dome was thoughtfully arranged to mirror the progress of the nation since its birth, through the motif of a butterfly’s life cycle — hedges and clusters of orchids were trimmed and positioned to resemble eggs, caterpillars, chrysalis and full-grown Lepidoptera.

The unconventional concept was realised by this year’s Orchid Extravaganza guest designer, Peter Cheok, who led the installation of the 650-sq-m display. “It’s an orchid show, so we had to use orchids,” the 37-year-old says. “But we were also inspired by National Day, so we wanted to tell the story [of the country] and of course we had to do something a little different, something new,” he says.

The director of O2 Plants, a subsidiary of Far East Flora established in 2008 that focuses on B2B plant sale and rental and interior plantscaping, Cheok is no stranger to garden displays that stray from the mainstream. The first he conceptualised, “Blowin’ in the Wind,” was part of the inaugural Singapore Garden Festival in 2006, and snagged the Gold Award and Best in Show in the Fantasy Garden Category with its depiction of dystopian decay — a landscape filled with dead or dying plants in which small pockets of thriving plants flourish.

“When we implemented it, people were like, Whoa, because it wasn’t something they expected to see in a landscape,” Cheok explains. “We were teetering on the borderline. If you were to bring this into the regular landscape category, it’d never have passed, because that’s supposed to be a showcase of live plants.”

There’s no harm in being different, he has since learnt from leading projects such as the mystical, surreal “Seeking Shangri-La,” the 2008 Singapore Garden Festival People’s Choice Award winner that then showed at the Ellerslie International Flower Show in New Zealand.

Landscape design wasn’t what Cheok trained in; he graduated in 1999 from Indiana University, where he studied information systems and business, and was looking forward to getting his start in consulting. But after completing his national service, the cool economic climate in 2002 nudged him back to Far East Flora — the integrated floriculture firm established in 1965 by his father, Danny Cheok — where he had spent his teenage years caring for plants, assisting customers and pushing their trolleys for them on weekends and during his school holidays. He was handed the marketing portfolio, and started with designing posters and staff uniforms, and learning how to manage ad agencies and the media. “That was throwing me into the deep end,” Cheok adds, “I try not to see myself on TV — it’s kind of unnerving.”

Being part of the family nursery business means spending workdays alongside his father, the group managing director, his two older brothers, and more than 10 cousins in various positions throughout the companies within Far East Flora. “You don’t feel the working pressure sometimes,” Cheok says, “because it’s still a family business, and it’s OK for us to make mistakes sometimes, but we learn as we go along.”

I try to do gardening at home…but I’m too busy to take care of the few plants we have. With three daughters, usually toys are more important than plants, and space is limited.

Orchids are intriguing to me because…I always find it amazing that one type of flower can have so many species, from tiny ones to massive ones and even those that rarely flower.

My favourite memory of spending my youth in the Far East Flora compound…is of working there during Chinese New Year — it was always fun, it was really crowded, you got to see a lot of people, and there was that Chinese New Year music playing in the background, the “tong tong chiang” kind.

Working alongside family is…always interesting — it’s so informal and yet you still maintain some level of professionalism. There’s no “I’m your boss and you must listen to me” kind of thing; matters are open for discussion.

An important piece of advice I received from my father is…it’s not enough to treat the customers well. You have to look after your staff and suppliers too, because these three groups will help your company grow to new heights.