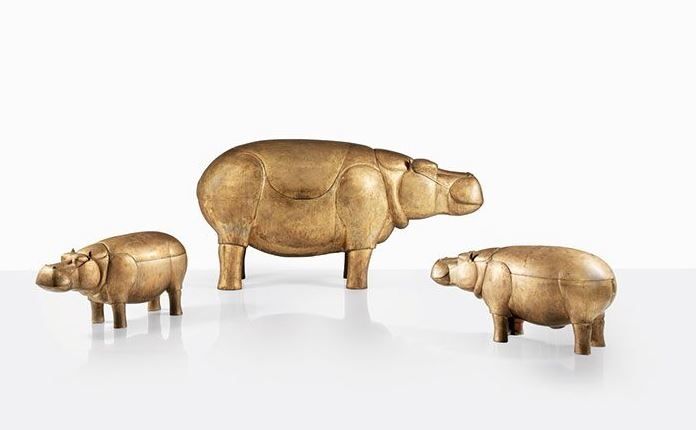 The bronze hippopotamus set was commissioned by French designers François-Xavier and Claude Lalanne in the 1990s by an unnamed collector.

The bathroom set comprises three life-size sculptures of the herbivorous mammal, the larger of which stows a full bathtub in its body. A smaller hippo holds a sink and vanity, while another includes a toilet and a bidet.

“Famille d’Hippopotames” will be coming to auction for the first time ever, with Sotheby’s estimating that it will fetch in the region of €2.5 million ($2.7 million).

A similar hippo bathtub by François-Xavier Lalanne made waves in November 2019 during Christie’s “La Ménagerie” sale, where it went under the hammer for an astronomical $4.3 million, nearly three times its high estimate.

The Lalanne brought in $101.5 million over a dedicated two-day sale at Sotheby’s in October 2019, quadrupling presale expectations of amassing a total of $17.7 million to $24.4 million.

Although it is still uncertain whether the “Important Design” sale will take place in Paris, Sotheby’s defied expectations earlier this April with its mid-season “Online Design” sale.

Tick-tock, tick-tock 🕰 our Design online-only sale closes tomorrow, 31 March. Head to the link in bio to discover more than 230 lots from the very best designers and collectors of the 20th and 21st centuries. Pictured here: a striking Pair of “Direction” Armchairs by Jean Prouvé circa 1951, from the collection of @themarcjacobs. #SothebysDesign #JeanProuvé #MarcJacobs

The sale brought in an unexpected total of $4 million, exceeding by more than $1 million its pre-sale high estimate of $2.9 million, and marking the highest-ever result for an online sale of 20th Century Design.

“The remarkable success of our mid-season Design auction demonstrates the strong demand we continue to see from collectors worldwide for works across the full spectrum of the Design markets,” Jodi Pollack, co-worldwide head of Sotheby’s 20th-century design department, said in a statement. “This result is an important indicator of the Design market’s momentum and growth at a much-needed time.