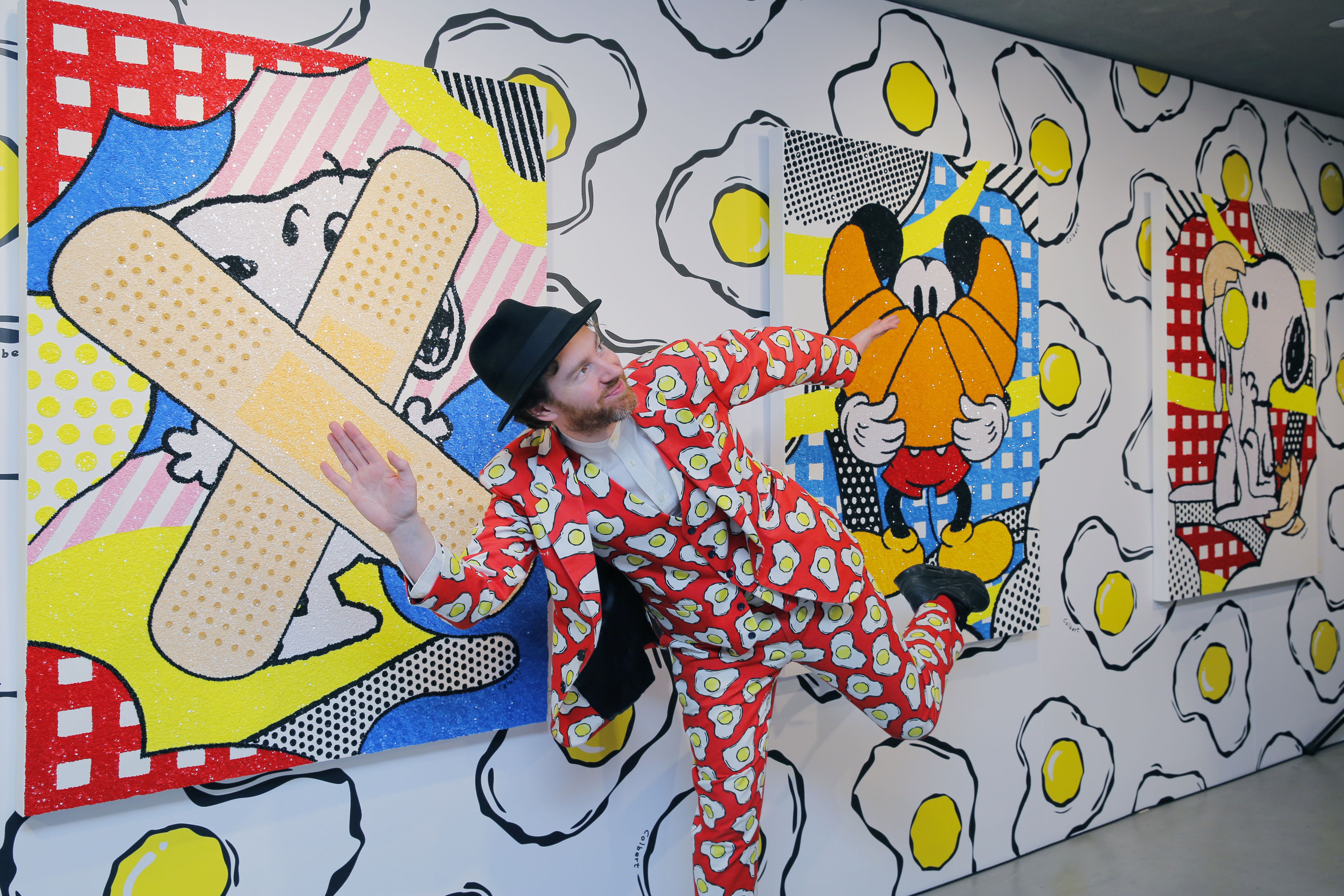 There’s a giant lobster walking around the Saatchi Gallery, wearing a suit with cartoon fried eggs printed all over it. He holds a half-smouldered cigarette in one claw, which he raises to a jaunty angle whenever someone asks for a selfie – which they do, often. It’s the opening night of Philip Colbert’s New Paintings exhibition for Frieze 2017 and London’s glitterati are out in full force.

There’s a Lady (of the capital-L variety) wearing a dress that looks like a can of baked beans. Another wears a sequinned tin of soup. There’s someone else dressed as a sparkly pencil, but she seems sensible in comparison. They’re all wearing The Rodnik Band, of course, the fashion label created by Colbert.

“The concept with the fashion label was this idea of making a spoof of a pop-band brand,” says Colbert, “because I’ve always been inspired by wearable art and looking at clothing as a medium for art rather than fashion.”

And the fashion world certainly adores him. At Colbert’s first gallery show in 2014, creations such as the Urinal Dress, inspired by Duchamp, led Vogue’s André Leon Talley to nickname him “the godson of Andy Warhol”. Today, Colbert can count Kanye West, Lady Gaga, Rita Ora and Cara Delevingne among his growing army of fans, and The Rodnik Band has collaborated with the likes of Rolex, Disney, and Chupa Chups. In short, Colbert is pop art.

While Colbert’s latest works – the eight large-scale paintings in the show – are certainly not expendable, low cost, or mass produced, they share the same language as all great pop art created in the 60 years since
that missive.

“I think it’s fair to say that art aspires to have a wide sense of communication,” explains Colbert. “There’s no question in my mind that art has become a brand, because we live in global, commercial times where everything has become brandable. And so artists, whether they like it or not, are brands.

“I don’t have any problem with that, because I don’t see ‘brand’ as a dirty word. If you make an interesting brand and it’s conceptual, then I think it touches upon what people like Hamilton and Warhol were playing on. The freedom of the brand provides an amazing way of communicating with people on a democratic level, and making art that has potential value for all – rather than just the privileged elite who are buying and collecting certain works in a way that doesn’t necessarily touch the general public.”

Growing up in rural Scotland, Colbert felt the pull of art from a young age. He recalls the mesmerising effect of being a small child and seeing a George Stubbs painting of a horse for the first time. Little wonder, then, that at the University of St Andrews he studied philosophy with two years of art history on the side.

Looking around at the canvases on the Saatchi Gallery walls, it’s easy to see the various art-history eras within the works. In Desert Hunt, Van Gogh wrestles a Rubens’ lion as Basquiat and Picasso look on – all in front of that infuriatingly familiar Microsoft error message. There’s a Stubbs horse too, with the suit-wearing lobster on its back. Which makes me wonder, is the lobster Colbert?

“I identified the lobster as this protagonist of surrealism because he’s footnoted in art history with the surrealist poets and painters. I found myself drawing this simplified lobster character and because I was drawing him so much people started identifying him with me, so he became a caricature of myself. In the paintings, he’s wearing my suit because I wanted to bring my physical world into the paintings. So, in a way, the lobster is very much the surreal alter-ego of myself.”

In real life, the paintings are even more hyper-saturated than on a screen. You can see where the oil paints have been worked into vivid textures, and pick out the contrast between acrylic, charcoal, and airbrush. Some aspects are photorealistic, whereas others are unabashedly cartoony. There’s a knowingness about the proliferation of emojis and Instagram heart buttons, as if Colbert is pre-empting your social-media posts about the work. And in this age of social-media echo chambers, the elephant in the room doesn’t even need to be named.

“Trump’s definitely been an influence,” admits Colbert, who started working on this series before Trump was elected. “I didn’t really want to put Trump into the paintings because I wanted to avoid such an obvious position, but there are lots of Trumpian elements that have come in. They’re sort of apocalyptic. They all have that dawn-of-nuclear-disaster [vibe]; I wanted them to have that darkness because I feel that is very much in everyone’s subconscious now. That’s the other thing about mass information: everyone knows everything.”

This darker side to Colbert’s work seems a marked change from when he took over Joyce Central with Mickey Mouse and Snoopy paintings during Art Basel in Hong Kong earlier this year. The show sold out, tapping into the local appetite for kitsch and kawaii. So, the big question is: does he plan on coming back to the city any time soon?

“I definitely want to do more in Hong Kong, 100 percent. I think I’m coming back to the next Art Basel. I’ve always really loved the energy in Hong Kong. It’s a different energy from London, so I always find it quite fun.”