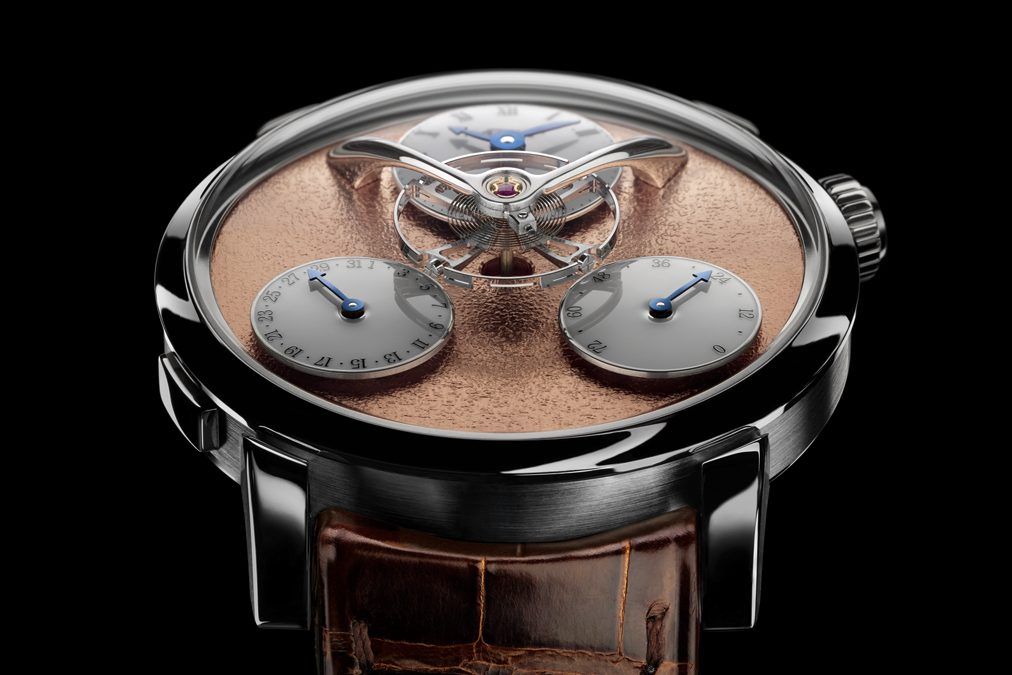 You probably know Maximilian Büsser and his collective of creative friends are renowned for being the rebel in the horological scene. Since its inception in 2005, the world has witnessed the immense talent MB&F possesses to transform traditional watchmaking of the highest craftsmanship into futuristic, fiercely unconventional timekeeping machines (JwlryMachine, Starfleet Machine, Melchior and Octopod are just some of the icons that intrigue me). But of course, most of the MB&F creations are not your average timepieces that you’d wear on your wrist (in fact, majority of them are not even wearables). That was until the brand presented the world with its Legacy Machine collection in 2011. The line is a tribute to 19th-century watchmaking excellence and has definitely brought a whole new ball game to the horological industry. And with its latest LM Split Escapement launched, I took the opportunity to ask MB&F Chief Communications Officer Charris Yadigaroglou to reveal five interesting facts about the machine.

LM Split Escapement was a solution to a problem

It started with the creation of LM Perpetual two years back. The perpetual calendar took four years to create and was referred to as a complete revolution in the history of watchmaking. Of course, there were several complications happening behind the doors of the MB&F Horological Lab. As you can see, the suspended balance wheel is above everything else and it seems like there is a lot going on the surface. We wanted to push part of the escapement behind the watch but there wasn’t much space to work with. Back then, we were working closely with Stephen McDonnell on developing the new perpetual calendar mechanism. During one of our meetings, we conceptualised a way to push half of the escapement to the other side of the watch. It’s a very cool feature; there’d be animation on both sides of the watch. Well, an awesome idea in theory, but we knew it’d be hard to execute in practice. For that concept to materialise, we needed to link both sides of the escapement with a long shaft (arbour), which was an absolutely mad idea. It was something unheard of in the industry so it was a really tough for us to actually find someone who was willing to produce the shaft. The requirement was too precise and many weren’t up for the challenge; any microscopic mistake would disrupt the whole mechanism. Then came along a guy who was willing to give it a try and fortunately, he succeeded, which brings us to present the LM Split Escapement. You can say that a new feature that was developed from a challenging situation deserves a watch for itself.

As complicated as it may seem, this machine is designed to be user-friendly

The LM Split Escapement has three indicators: hours and minutes, date and power reserve. And what is unique about this machine is the push-button next to the date sub-dial. If you’re a watch collector, you’ll know that recalibrating is an unavoidable issue faced. Collectors have a lot of watches and we know they’ll never wear one same watch every day. And as far as luxury watches go, you’ll have to wind it up in order to adjust to the present time and date. It’s a hassle really and we thought it would be a great idea if we could create a system to make the setting of the date much more seamless. With just a push of a button at the side, you’re setting the date sub-dial for a quick adjustment of the date accordingly. No special tools or complicated setting required. It’s fool-proof.

Not to be confused with sandblasting, the burnished surface finish seen under the stretched lacquer dial of the LM Split Escapement is known as frosting. This is a more artisanal technique to give that shimmering texture on the dial. Just like winter frost glistering when it catches the light. It’s a traditional method used in the 18th and 19th century and involves mixing acid and fire. This frosted finish is no longer practicable due to its hazardous nature and is substituted by a more industrial method called sandblasting. However, there are some craftsmen who are able to recreate the exact texture and sheen of frosting without the use of chemicals. Still, it is a very difficult skill that can only be done by hand. In Switzerland, I can say that there are fewer than five artists who have managed to master this artisanal technique.

MB&F is not a fan of enamel

Well, most people assume that all the dials of MB&F, including the sub-dials of the LM Split Escapement, are made of enamel. Well, if it is any other watch, it could be the case as this is how it’s made traditional. We’ve tried using enamel before but weren’t happy with the result. Instead, MB&F uses a more noble technique which involves heating multiple layers of lacquer, causing them to stretch tightly over the surface of the dials. The final result produces a more luminous and deeper depth to the dials.

In general, the Legacy Machine line is meant to show a more classic and conservative side of MB&F Machines. But if you look at it closer, you’ll know it’s not true: the split escapement with the balance wheel suspended above the dial and the anchor under the movement is absolutely unconventional. The ring you see beating like a heart? That is the heart of the mechanical balance wheel and is usually hidden inside the movement. When it is tiny, it’s easier to make high frequency. The problem is the speed of the small balance wheel: If it’s too fast, you won’t be able to really see it move thus boring to our senses. However, if a big balance wheel is used and in turn slows down its speed voluntarily, you’ll then be able to clearly appreciate the spring beating beautifully. Which, in my opinion, is much more pleasurable than reading the time.

Discover and buy MB&F machines at The Hour Glass boutiques located in The Gardens Mall and Pavilion Kuala Lumpur. For more information on LM Split Escapement, you can visit the website by clicking here.