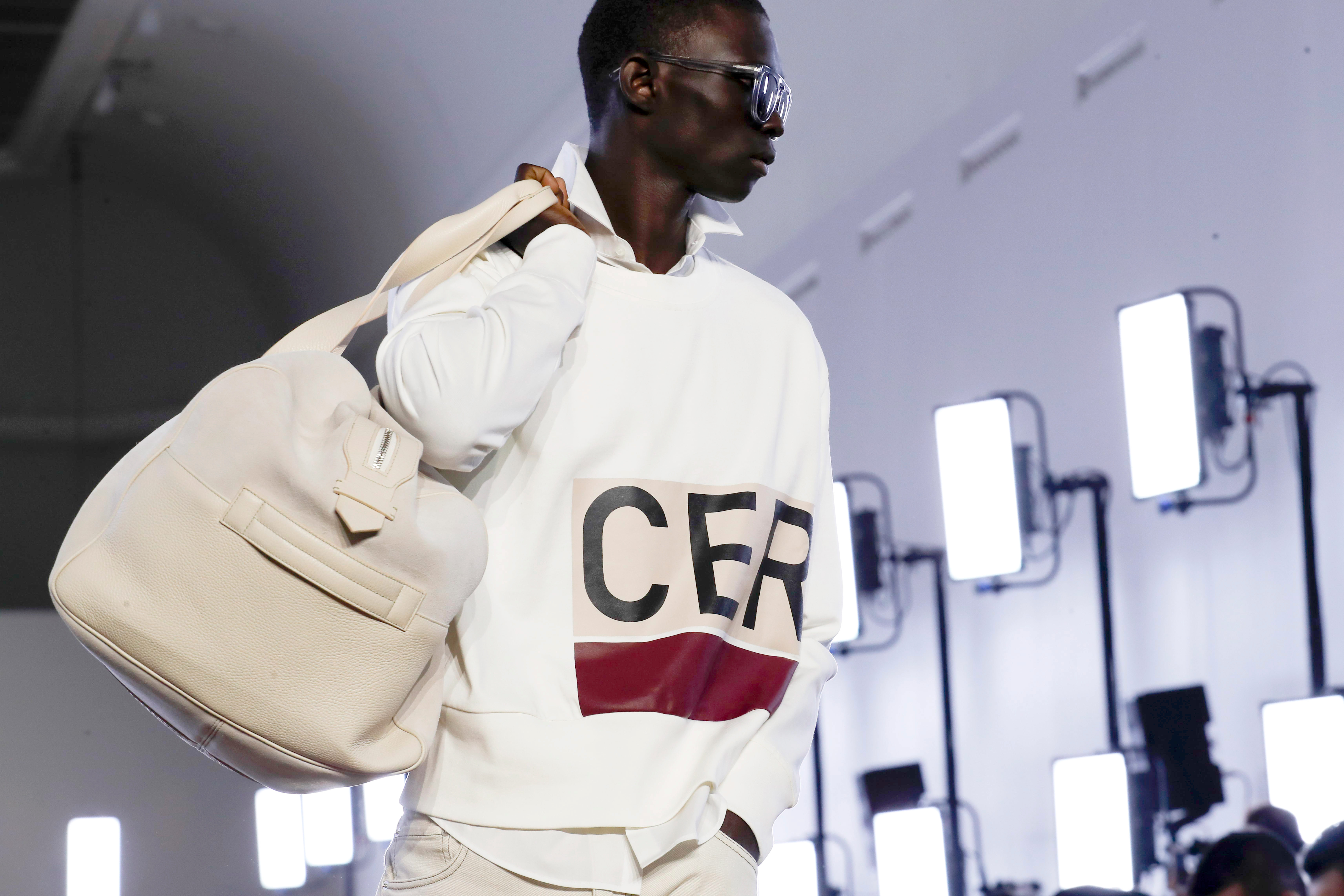 Jason Basmajian, chief creative officer of esteemed menswear label Cerruti, is beginning to tell me about his history in menswear design. I say beginning, because very quickly we’re talking about something that would seem irrelevant if it weren’t for Basmajian prefacing his monologue by telling me I’ve made him feel old – before promptly diving into explanations of how his previous evening’s engagement really drove the age dagger home.

“So, I’m texting my style and image director, Paul, who’s back in Paris,” the Boston native starts, “and I’m like, ‘I’m eating insanely delicious food, drinking really good sake with a whole bunch of millennials and someone who’s wearing a gold lamé blouse and got the gender-fluid thing nailed’ – I’m like, OK, you look amazing, that whole story is happening for you – ‘listening to throwback songs from the ’80s and it’s the best soundtrack that I’ve ever heard that these kids have never heard once because they were all born in 2000. But I’m having the most amazing time.’”

It’s a good way to sum up how the rest of our chat goes. Every story Basmajian tells follows one of two roads; the first, pointing behind, the other, set in front: the past and the future, the old and the young. It’s symptomatic of how he works, always balancing two supposedly opposing ideas.

Basmajian joined Cerruti in 2015, after stints at some of menswear’s most iconic labels, including Brioni and Gieves & Hawkes. At these two traditional tailors – one Italian, the other resolutely British – he awoke a modern sensibility, with slimmer cuts, new colour palettes and even (gasp) blazers styled over T-shirts and trousers pulled on with trainers. It was clear then that Basmajian favoured a youthful reduct, and it is no less clear now.

There’s only a whisper of a line between respecting heritage and losing your voice to it, likewise between encouraging innovation and tumbling down a rabbit hole of silliness. For spring/summer 2018, Basmajian trod that narrow path with aplomb: loose suiting, logoed sweatshirts, foliage-printed jackets and one masterful salmon top and trouser combo neatly linking the then and the now.

And with last year’s 50th brand anniversary followed by a creative roadshow (in Asia until mid-April), there’s been plenty of thinking about where Cerruti started. “When I grew up,” Basmajian explains, “Nino [Cerruti, the label’s founder] was a hero. Nino was one of the first designers to mix sportswear and tailoring, he was one of the first designers really to use technical fabrics mixed with formal fabrics. He was doing all that before we’d ever heard of Jil Sander, before we’d heard of Miuccia Prada.

“When I called him to say, ‘Nino, the group would like me to take on Cerruti, I think it’s a great gig and all my jobs have led up to this,’ – I think it was a perfect casting, a perfect fit, which doesn’t always happen in fashion – ‘What’s your advice?’

“Firstly, he said, ‘You have to do it,’ and second of all, ‘Don’t get distracted. They will pull you in a million directions, start to design clothes that you would want to wear, as I did.’ It’s so fundamental and basic, right?”

Basmajian has a deep reverence for the man who founded the maison. Not, however, at the expense of taking Cerruti into a new era – “I’m not trying to recreate what Nino did,” he makes clear, “that would just be weird. I want the new version of that” – asking himself, what do today’s twenty-somethings want to wear?

“Our boys in the show are a great barometer,” Basmajian says, when I pose the question. “When you get these kids who come to you and they ask if they can borrow the clothes, saying, ‘This is dope, how do I get this?’ That is such a compliment. That is the generation we’re trying to reach – and we are.”

As for the people he has around him in his Paris studios? International, and mostly young, another indicator of his focus on reaching today’s most desirable customer. “You’re only as good as your team and I have a really diverse team. It’s my job to set the DNA and the footprint and it’s my job to channel it. But you need that creativity, that new energy and that rawness coming in.”

“I call them my kids. I have a couple of senior team members, including my collection director who is Italian, and magical – she spent 12 years working for Mr Valentino, 10 years working for Stefano at Yves Saint Laurent, three or four years being tortured by Riccardo at Givenchy – we’ve created a family, we feel like the parents. You feel like you’ve got to nurture them and you feel like you’ve got to give them a reality check, too.”

It rings true. Indeed, we’re chatting about what it’s like working with French millennials when Basmajian quips, “The French are always coming in whenever, they need 77 cigarette breaks a day, they always talk about mes droits [my rights] and I’m like, sweetie, you work in fashion and you’re 25, you know what, cut the swatches.” Beyond the harsh realities of the job, Basmajian isn’t just designing for today’s youth, he’s also teaching them how to take his place. And he takes his responsibility in supporting the next generation of fashion leaders to heart.

To wit, the brand has recently completed a programme with design institute Parsons Paris, welcoming a group of students from both fashion and management courses to come together and create their own collection under the eye of the Cerruti team. “It was an amazing project,” Basmajian tells me. “I wanted them to understand that it’s not just about creativity; these kids had to do market research, positioning, pricing, supply chain, design, presentation, look book. The brief was gender fluidity; we asked what would a gender-fluid capsule collection signed Cerruti look like from this generation?

“In three and a half months, these kids personally and professionally grew, you could feel it. And that very much goes to the responsibility of nurturing, training and showing these kids that you’re only as good as the whole. If there’s six of you, you might think you’re the best illustrator, but actually when you sit down as a group, you figure out that you might need to check your ego. I don’t need to see your shit, I don’t want to see the backstage. In the real world, you’ve got one chance to present.”

Basmajian is off, talking ten to the dozen about the value of passion and focus, about the end of small labels (“They’ve been absorbed by some mega death star of luxury”) and how other colossal brands began (“Armani worked with Nino, then went off to be a rock star of all rock stars”). Yet it’s always Cerruti’s house code and the bright creatives of the future that find their way back into the conversation.

We sign off where we started, talking about a chap in a lamé blouse, and what gender and social norms really mean to the people they’re impacting the most, the
oft-maligned millennial generation.

“Gender-fluid fashion is just an expression of an ideology and a philosophy. Where did that come from and why? Why does this generation feel this so strongly? This is really how they think and live. How exciting is the world going to be? On the one hand the world’s scary, that we have people like Trump in power, but then, whatever, the future is this generation that’s coming up, that thinks so differently. And that’s kind of exciting.”

Sign up to get the latest luxury and lifestyle news delivered to your inbox.
Alice Franklin