How the Future of Design Lies in the Past 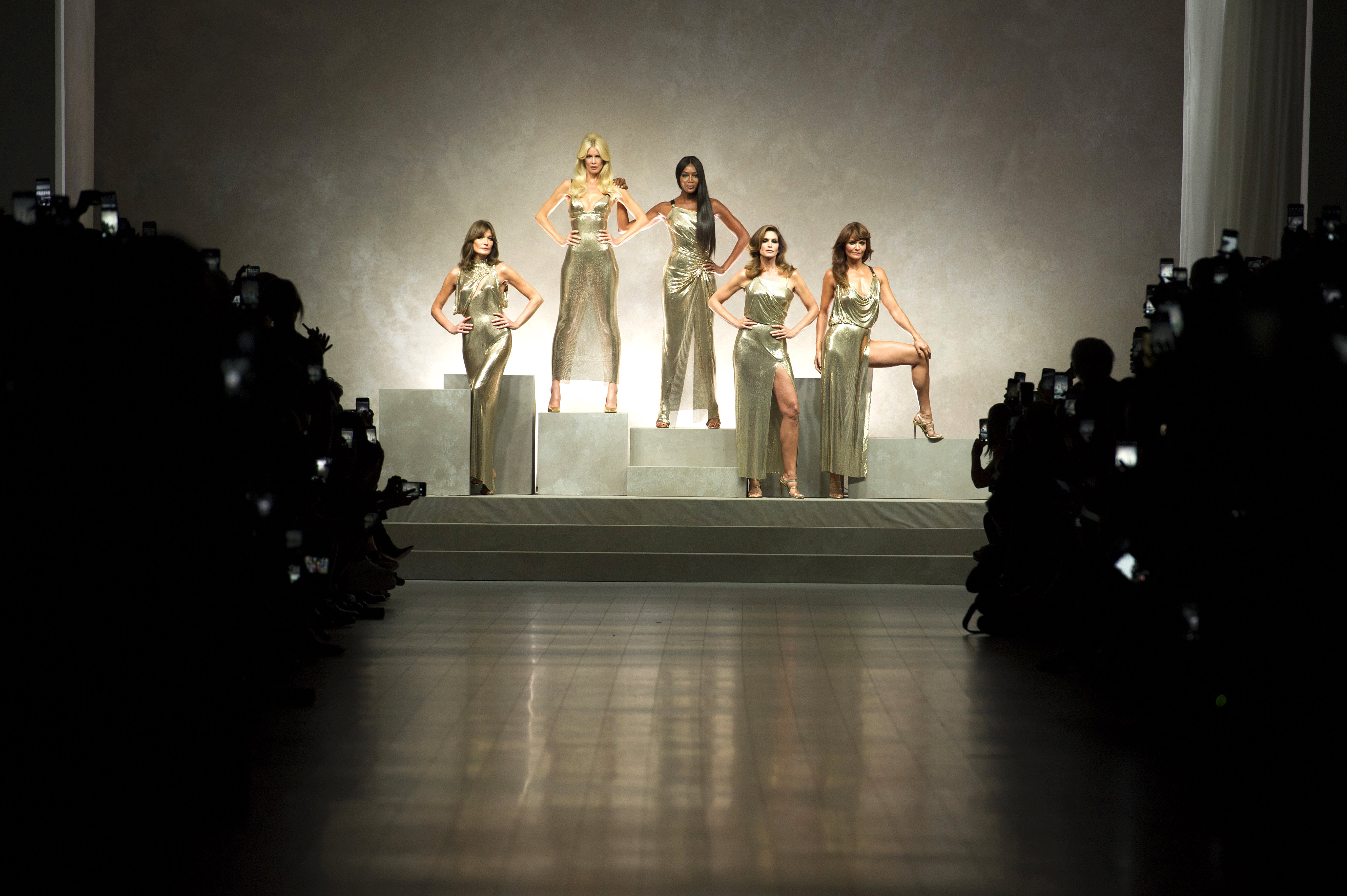 Heritage is red-hot this season – thanks in no small part to Donatella Versace, who blew it out of the water with her spring/summer 2018 show, the Tribute collection to her brother Gianni on the 20th anniversary of his brutal murder. But heritage has been on designers’ minds for a while now. The constant merry-go-round of names coming in and out of houses has forced them, and subsequently, us, to confront what a brand is about, what it once meant, and what it means now. New creative directors must delve into a brand’s past, select elements of its legacy and carry it into the future.

But a legacy is hard to define and convey, even that of a close family member. When the Versace collection was first shown, the word backstage was that Ms Versace only found courage to tackle her brother’s archive 20 years after his death. There is perhaps nobody more appropriate to answer the question of what legacy is than Donatella Versace. “Gianni’s legacy is something that I cannot really sum up in a few words,” she says. “What Gianni did was something extraordinary. He created a world where style, trends, the Italian culture and the ancient myths all merged together in a new and unexpected way.

“He pushed boundaries and was not afraid to dare, and this is how he created something unique and completely different from what the rest of the world was doing. His legacy to me is not just in the clothes he designed, but most importantly in the messages within his collections.

“He taught men and women alike how to break rules, how to be bold and feel empowered. He showed them the power of attraction and how to be sexy. And he created a family around him that welcomed everyone: artists, musicians and models.”

This idea of family is key to Gianni Versace’s success and to that of many other brands in building their identities. There is comfort in belonging. Nothing so irrefutably demonstrates this than the furore that met Versace’s super family tableau this season, which mimics Richard Avedon’s 1994 ad campaign for Versace – where some of the same models were also in dresses of gold chain mail. Versace’s closeness with the supermodels created an inclusiveness – to have a family that transcends DNA gives the brand a sense of identity and lifestyle that inspires nostalgia in those for whom these women were once emblems of the present, and aspiration in others for whom they are a symbol of a golden past. Every piece of the Tribute collection is finished with a label that marks the collection and the year by which it was inspired, to give consumers a marker of their origin.

“I could not do a proper tribute to my brother without the girls he made famous and who have been with us since the beginning” says Versace. “When Naomi, Cindy, Claudia and the other girls started to work with Gianni they were very young. He was like a father figure to them; our friendship is real, it’s not something for the tabloids. We still talk and we all know that we will always be there for one another.”

What is the task of modernising a brand’s heritage like for creative directors who have been hired for the job without that familial connection and closeness? For some, like Christina Zeller at Delvaux, it’s a matter of maintaining the brand’s founding commitment to elegance and quality. “We are not a fashionable brand, but innovative” she says. “I follow my intuitions and emphasise on beauty and a unique look – without compromising by trying to look hype. Real luxury is to have the time to create innovative and timeless pieces.”

Logos are seeing a resurgence at the moment, a mania that might be at first attributed to Gucci and Vetements’ predilections to design with their own and others’ logos in mind, but nostalgia for the 1980s and ’90s is at an all-time high.

From pop culture phenomena such as ’80s redux Stranger Things and a revival of Will and Grace, to lamé, chokers and even supermodels, there’s a collective looking-back to a pre-digital age where glamour and mystery still existed to excite and entice – and logos were wrapped up in the lore.

Natacha Ramsay-Levi, Keller’s replacement at Chloé, also looked to the logo for inspiration, taking the “o” in Chloé and imposing upon it ideas of the infinite “o”, attributing to it the quality of an “eye letter”. The shape occurs throughout her first collection as earrings and rings, while on garments metal-hoop details are found on zips and other embellishments.

Much of this new direction comes from Ramsay-Levi’s interpretation of Chloé founder Gaby Aghion’s Egyptian roots, merging ideas of spirituality and femininity for a different take on the brand’s identity. Jewellery has been created celebrating the female form: shapes of the moon, breast and hands are made to look like totems or amulets found in the sand.

Julie de Libran at Sonia Rykiel embraces the founder’s ideology and works to translate the sense of independence and revolutionary spirit that defined the brand. “It may be that the flame of ’68 has dimmed, but what it started is still being developed today – the right to idealism and freedom,” she says. “I like to think we are a house largely of women creating for women, a sorority in the world and that is incredibly important. I always have a woman in mind when I’m designing. This was the founding principle for Madame Rykiel.”

De Libran has been successful in keeping the Rykiel flame alive, confidently embracing the house’s heritage while giving it her own spin. At the spring-summer 2017 show, shortly after the death of Sonia Rykiel, de Libran celebrated Rykiel’s legacy with a finale of girls wearing knitted jumpers each sporting a letter that, put in a line, spelt out the founder’s name. Shortly after, she released the Rykiel Forever collection, which draws on jumpers from the archive bearing the house’s signature stripes and reinterpreting and reinventing the style with new knitting techniques and silhouettes.

One of the more interesting brands that has seen three designers in seven years reinterpret its legacy since its relaunch, is Carven. Serge Ruffieux’s most recent endeavour is to transform the brand to reflect Madame Carven’s intrepid spirit. “What struck me most when first arriving at Carven was the name,” he says. “It’s a bit old-fashioned, désuet in a sense, but in a positive way. You can build a strong fashion aesthetic around it and play with it.”

“What touched me was learning about Madame Carven’s spirit and vigour. She had a very free lifestyle where she would tour her collections all over the world and take inspiration from places she’d visit – Brazil, Egypt, Portugal and many more.”

Both his resort 2017 and spring/summer 2018 collections are departures from the chic bourgeois Parisienne of predecessor Guillaume Henry, who was initially tasked with rebooting the brand for the 21st century, before yielding to the edgier street take of Alexis Martial and Adrien Caillaudaud. What is Ruffieux’s read on the archive?

“Madame Carven’s attitude to clothing was modern and eccentric,” he says. “The embellished shoes and accessories are inspired by her exotic carnet de voyage in an ode to far-flung locations she visited. The rooster print from the spring/summer 2018 collection comes from the archive I found at the Palais Galliera in Paris. In these same archives I found draped dresses but also couture gowns in African boubou fabrics. All these details and elements of contrast speak to the idea of ‘clash cool’ that I value so much, and can all be found in the spring/summer collection.”

And then what? “I’m always thinking about the next challenge, which is going to be the second show for autumn/winter 2018, but I would also love for Carven to become renowned for its accessories.”

So heritage is many things to many people – a celebration for some, a springboard to the future for others. But is this a mould for future creativity or a timely stopgap? How many designers can mine a logo for fresh perspective before it becomes a reductive exercise in gimmickry? Right now, the ’80s and ’90s carry the ability to incite mass sentimentality because of their accessibility – most of us have lived through it and its icons still linger. It’s also a knee-jerk reaction in the wake of our current digital and social-media fatigue (you know it’s serious when founding Facebook staff go on the record to denounce the platform that started it all) to go back to the decades right at the cusp of the digital age, when all of it was just hope and possibility, sorely needed in today’s climate. But like all fads – this too shall pass.

There’s also a question of cults of personality that have been created in the wake of the founder. Ms Versace herself is now more bound to the brand than her brother was, and has in fact now served as creative head for a year longer than he did. Rumours have been swirling around the questions of whether this tribute was a covert farewell. Names have been floated – Riccardo Tisci, Virgil Abloh. How will they negotiate Mr and Ms Versace’s contributions?

When Karl Lagerfeld steps down from Chanel, his successor will have to tussle in the shadow of a man who paid homage to Coco Chanel in his work, but is himself inextricable from the brand. And what about a brand like Prada, whose genius is in a feeling rather than in house codes? Something as intangible as an essence is difficult to repackage. Or, who will follow in the footsteps of the greatest original of our generation, Rei Kawakubo? If Comme des Garçons is known for industry-shattering innovation, does it count as innovation if a successor merely reinvents from the archives? The difficult business of providing an answer to these questions lies only in creative brains as yet undiscovered. Until then, it is ours only to delight in the inspiration that heritage has brought us to date.