Laurence Graff’s sparkling success story and why he loves Singapore 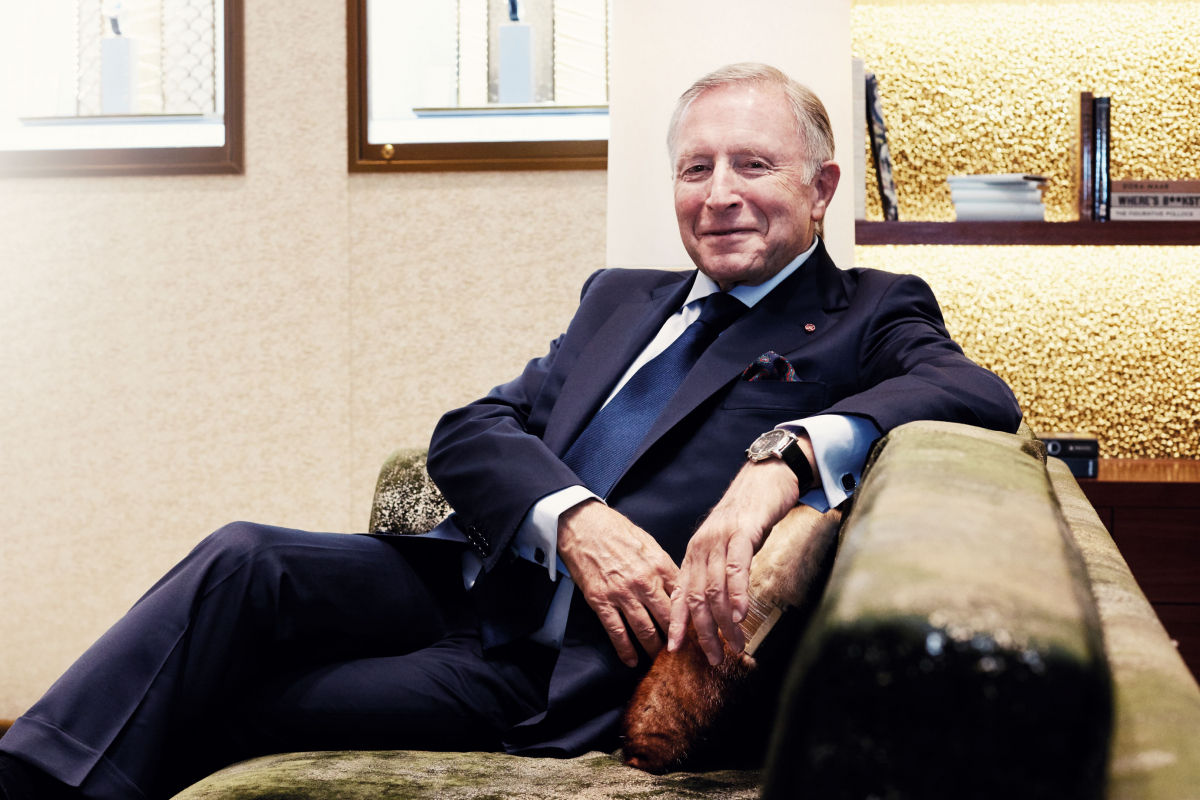 There is perhaps no other man who has acquired and produced as many blockbuster diamonds as Laurence Graff OBE, founder of Graff Diamonds. In the last two years alone, he procured two important uncut diamonds.

There was a 373.72-ct rough bought in 2016 for $17.5 million. It was followed by the original stone it was once part of — the 1109-ct Lesedi La Rona, purchased in September for an eye-watering $53 million. Sized like a tennis ball, it is the largest rough ever found on the planet in this century.

“That was a momentous day in my career,” shares the soft-spoken Englishman of the recent addition to his “family”, a term of endearment he uses on his precious diamonds. Exuding an air of aristocracy in his navy suit, made-to-order no doubt, the 79-year old knighted Officer of the Most Excellent Order of the British Empire (OBE) was in Singapore to officiate the opening of Graff Diamonds’ ION Orchard boutique — his first store in Singapore and the only one in this region.

Graff’s success story is well-known: Born to working-class Jewish immigrant parents, he took his first step into the world of jewellery at 15 as an apprentice in London’s Hatton Garden. In 1960, barely an adult, he founded Graff Diamonds. It’s an inspirational rags-to-riches tale built on the values of “hard work, honesty and correctness” — the three drivers he attributes his success to.

Today, the diamantaire billionaire is the chairman of a vertically integrated company, one of very rare few in jewellery. He doesn’t just own all 55 boutiques in his fast-expanding retail empire, he also has a 15-percent stake in Gem Diamonds (with mines in Lesotho and Botswana) and is the controlling shareholder in the South African Diamond Corporation, one of South Africa’s main diamond producers. He hires only the best polishers and cutters for his workshops in Antwerp, Botswana and New York. And everything comes together like magic in the Graff Diamonds jewellery workshop in London, where its flagship boutique is based.

While high-wattage glamorous jewellery remains the public face of its business, the backbone of Graff Diamonds is in the supply of “second-quality diamonds… stones that are not good enough for our retail ventures” to other industry players, says Graff.

Although his son, François, has assumed the position of CEO of Graff Diamonds, Laurence Graff remains very much involved. “Unless I’m in love with the gemstone, diamond or piece of jewellery, it’s not going to see anybody. I pass every product we create,” he says. “I look at every diamond and plan its cutting, and I acquire most of the very special gemstones that we sell.”

NATURAL BORN TALENT
Often referred to as the king of diamonds, Graff has an instinctive knack for visualising and unravelling the full potential of each diamond. Under his supervision, the brand has shaped several headline-grabbing diamonds, including the 102.79-ct Graff Constellation, the largest round, D colour, internally flawless diamond ever graded by the Gemological Institute of America (GIA); the 118.08-ct Delaire Sunrise, the largest square emerald-cut fancy vivid yellow diamond; and the 118.78-ct Graff Venus, the largest D colour, flawless, heart-shaped diamond ever cut and polished.

Although large diamonds appear to be a house speciality, size is not his first priority; attaining perfection remains the ultimate quest. He once instructed his diamond cutter to turn a stone that was “ten points over a 100” to its eventual weight of “100 and 1 point” — taking off a mere 0.09cts only— “because the stone was not perfect”. “The risk was crazy… There’s nothing spared in this search for quality. If it takes the polishing of another facet to become sharper than somebody else’s facet — we’d do it,” he says.

This is, after all, the same man who in 2009, brazenly shaved more than 4cts off the historic Wittelsbach diamond to take it from VS2 clarity to internally flawless. It was a move that created controversy but a well-calculated risk that paid off handsomely. The transformed Wittelsbach-Graff diamond was purportedly sold to Hamad bin Khalifa Al Thani, the former Emir of Qatar, for about $80 million, roughly four times that of the original investment. “I’m always doing it. I’m always looking at something and thinking, it’s 99.9 percent now but it’s got to be 100 percent. And I’ll go for it; sometimes at great risk,” he says.

SAVVY BUSINESSMAN
His healthy appetite for risk is matched with an innate talent for making wise decisions. “Being correct in every way,” says Graff, has contributed to how he successfully built his empire — all within just 57 years. It’s why he took a year before finally acquiring the Lesedi La Rona. It’s also why Graff Diamonds is one of the last international high jewellery brands to enter Singapore.

“When you buy a rough — and I’ve bought more large rough diamonds than any other living person — there is an element of gamble. I know my job very well but with a rough diamond there is no way of being 100 percent sure of exactly what’s in there,” he says. The only way to determine its quality is to place a tiny facet on the stone, an imperceptible but irreversible move that can only be done after the stone is acquired.

Despite the uncertainty, he daringly went ahead with the purchase because of what he calls “a little benefit up my sleeve”. In the year he took to convince Lucara Diamond that he was the best custodian for Lesedi La Rona (following a failed auction by Sotheby’s in June 2016), he’d cut satellite diamonds on the 373.72-ct rough that he purchased earlier in the year — the one that is part of the Lesedi La Rona.

The diamonds all turned out to be D colour flawless. “That gave me an insight into what could be in that 1109-ct stone. But let’s see what the future tells us,” he reveals. That wasn’t the only advantage he gained from the extra time. It also allowed him to further negotiate the price down to $53 million — a handsome sum, indubitably, but significantly reduced from its intended reserve of $70 million.

As for why he’s so late in the game with his expansion into Singapore, Laurence Graff explains sagely that he bided for “a really good unit at a really good location”.

“We’ve been wanting to open in Singapore but we couldn’t find a place. Singapore was expanding — a shopping area would open and a better one would open soon after. We waited,” he says.

WHY HE LOVES SINGAPORE
Graff and his jewellery is no stranger to the region. His first visit to Singapore was in 1967, during a layover en route to Australia. His tour of the city-state took him to Robinson’s Department Store (“it looked like Harrods”) at Raffles Place, where he ran into an acquaintance tasked with setting up the store’s jewellery department. Three weeks later, Laurence Graff returned with a briefcase full of gemstones and a solo exhibition in his name.

“I was a great success… I knew everybody in town. I knew the Sultan of Brunei before he was crowned and I knew his father too,” he says. Hassanal Bolkiah, the 29th Sultan of Brunei, became a lifelong client and friend.

There are two other (and lesser known) reasons why Singapore has a special place in Graff’s heart.

First is the crucial, and rather heroic, role he played during the fire that destroyed Robinson’s in 1972. Having set up shop at its jewellery floor, Graff arrived in the morning and saw a large crowd outside. After deducing that a fire (and not a robbery) had taken place, he sprung into action — rendering assistance to others while saving his jewels. “I helped four or five people out the store, some I had to hold in my arms,” he recounts. “People were asking me for my autograph. It made me very famous, although not in the best way.”

The other is more personal. Laurence Graff never forgot the stories his father shared about Singapore, where he was stationed during World War II. “He told me about the people, how multinational the country was and how amazing the food was.”

Exactly 50 years after he first set foot in Singapore, Laurence Graff made a glittering return: “I really owe a lot to Singapore… I’ve always said that we must come back.”

And what a home the brand has built for itself. The 2,330-sq-ft boutique features a gilded exterior, with American walnut wood panels, lush upholstery and gilt fixtures on the inside. Its VIP salon is massive, perfect for high-profile clientele from around the region.

In the highbrow world of high jewellery, where heritage is often  a trump card, Graff Diamonds is a rare exception. There’s no need to rely on kings and queens from a bygone era to gain credibility, for Laurence Graff has his diamonds.

“It’s difficult to let them go but I’ve learnt to do so. Otherwise, the best clients in the world won’t be buying from me — they’ll be looking elsewhere.”

“Anybody who’s really rich knows Graff Diamonds. When they want something, they’ll come to us. And 99.9 percent of the time, they’ll buy from us because our stocks are far above what anybody else has in quantity and in quality,” Laurence Graff says.