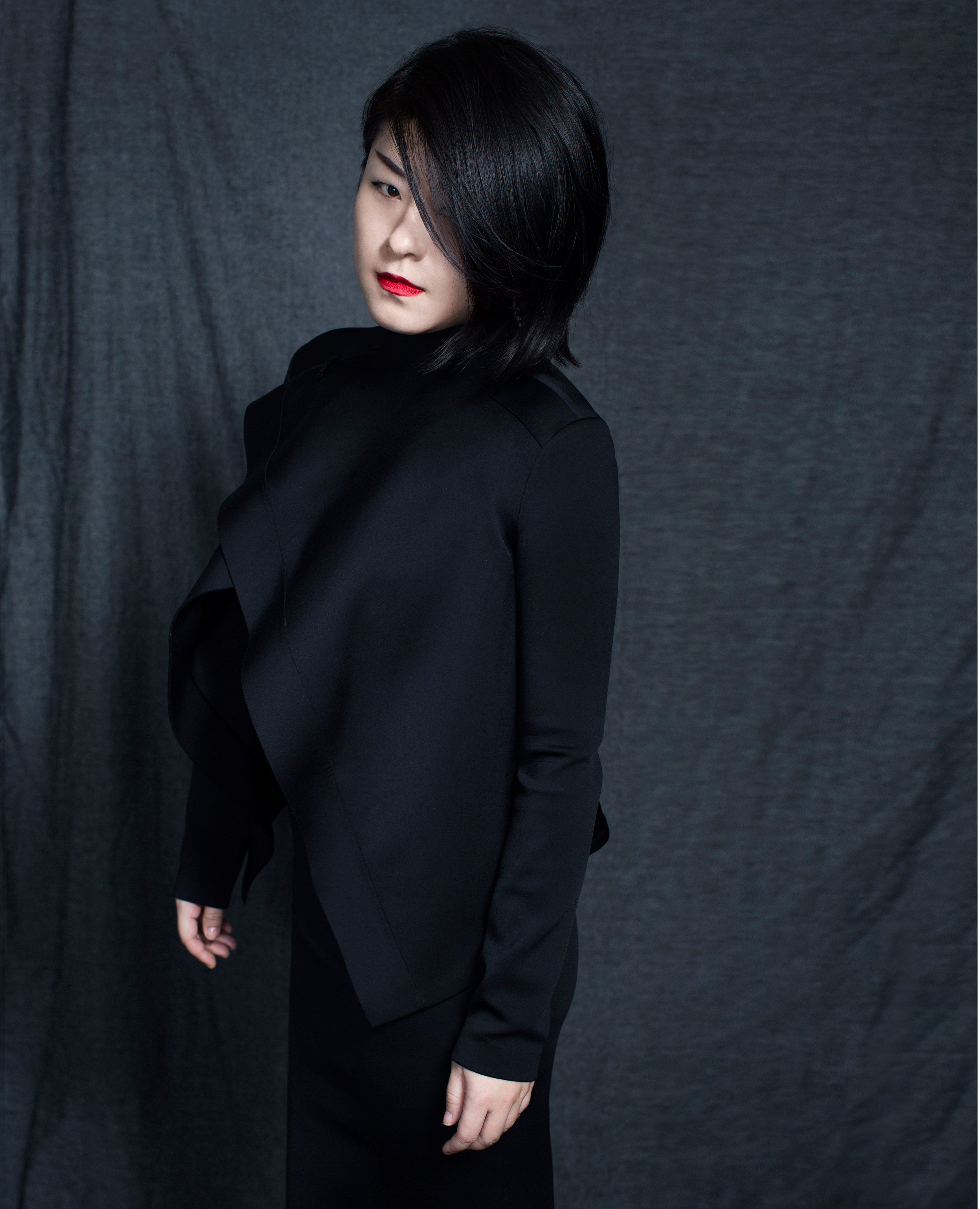 Once seen, Masha Ma is never forgotten. The designer has a floppy, over-the-face fringe that has become a talked-about feature on Chinese social media, to the extent that there is even a hashtag, #halffacecovergirl.

As a media-savvy millennial, Ma encourages fans to post their own versions of her eye-obscuring fringe, a procedure that also allows her direct contact with people who buy her clothes. But, as she cheerfully admits, there are those who find the constant fringe flicking rather irritating. When meeting Ma, a naturally cheery and garrulous character, it can be distracting to have every answer accompanied by a shake of the head, or a sweep of the hand, to move the damn fringe out of the way.

“It’s a love or hate thing, I don’t think you’ll find so much neutral or middle ground,” laughs Ma with – inevitably – a toss of the fringe. “People hashtag me when they have a similar hairstyle and for fun I’ll choose one every week and repost it. Hundreds of people are doing it; some are shy so they send me messages on Weibo, or Wechat, rather than posting it, [but] they want me to see it.

“It started when I was very young, I didn’t want to have a boring hairstyle with an ordinary fringe, or be cutesy. I was never a pretty girl when I was young so I wanted to cover my face and then I got lazy and it got longer and one day it stayed longer and I realised it was a hairstyle and a way of people recognising me. It also helped in Europe where people often think that Asians look alike – they definitely remember me!”

They do indeed, and not only for the distinctive tresses. Ma is becoming something of a force internationally, and in her native China, with a rapidly expanding portfolio of stores and lines. There are three main brands, one catering to entry-level fashionistas, another to more discerning consumers, and a third aimed at an increasingly important segment of the market – menswear.

She’s nothing if not bold and ambitious, showing at the twice-annual shows in Paris at ever-larger venues. October’s catwalk show, which showcased the spring/summer 2018 collection, also featured a specially commissioned film by Hong Kong’s Wing Shya that pays homage to Wong Kar-wai’s movie 2046.

There’s been a slew of endorsements from celebrity names, confirming Masha Ma as a brand with plenty of star quotient. Togs from Ma have been draped on the frames of A-list actress Zhang Ziyi, shock-popster Lady Gaga and supermodel Naomi Campbell.

International magazines have also picked up on the rising star from China, with profiles galore in some of the most cutting-edge fashion publications. A writer at now-defunct Style.com neatly summed up her allure a few years ago. “If you were to pin a picture on fashion’s new global face it might well be the Beijing-born, London and Paris-trained Masha Ma. A much-noted rising star, Ma creates an aesthetic that combines Parisian silhouette with American colours and London detail.”

The British capital was the most important early influence, opening Ma’s eyes to a whole world of career possibilities. She listened attentively during lectures at Central Saint Martins design school, and threw herself enthusiastically into an exploration of the nightlife scene, visiting grunge clubs, techno-music parties and after-hours bars.

Says Ma: “London has an energy and rawness and good young designers like no other city in the world. It has that rebel element. I was affected by the nightlife scene, the music and the interesting people. Everyone has their own style. You see hilariously fascinating people who express themselves in a very liberating way, that really affected me. I felt that I belonged to the fashion tribe, almost like a religion.”

A post-college job with Alexander McQueen also allowed the neophyte designer an opportunity to learn from one of the true contemporary fashion innovators. It’s no coincidence that sharp tailoring – a particular strength of the Savile Row-trained McQueen – is also one of Ma’s signatures.

Overall, the Ma style is considered to be feminine and elegant, with the pencil skirt at the very heart of all collections. There’s also the odd quirky touch, such as sending out models with face masks at a Paris show, a gimmicky but effective way of drawing attention to her clothes, and focusing attention on the severe pollution that chokes major Chinese cities, in particular her home city of Beijing.

Not that highlighting the smog in any way sullied her reputation with the powers that be. An invitation arrived soon afterwards to design the kit for the China team at the Olympic Games in Rio; other commissions have included livery for a British Airways plane, costumes for mainland Chinese television productions and new uniforms for a luxury resort hotel.

It means a dizzyingly hectic schedule that involves shuttling between Shanghai and Paris, with regular side trips to Beijing, Seoul and Tokyo. Being young and energetic helps – Ma turns 32 later this year – as does an ability to compartmentalise.

When in Shanghai, early mornings see Ma ensconced in her office, with orders not to be disturbed, focusing on thinking and sketching. Music and magazines are main sources of inspiration, as are movies, art galleries and technology.

The creative process involves consistently coming up with new ideas for her three separate brands. There is the main Masha Ma clothing line that made her name; Masha Ma + Lofi, a collaboration with stylist Cherry Gun aimed at millennials; and Mattitude, targeting modern urban males who are seeking a classy, well-made local option to imported designer brands.

She says: “You have your morning coffee, you’re in your office in a moment of meditation, completely liberated. Your mind is freed up for innovative and creative possibilities, with the feeling that you can design anything today. It’s real freedom.

“I have a team of young and talented people. They’re all millennials – I don’t think any of them have spent a day without a smartphone! We’re always looking for people who have a strong state of mind and are clear what their speciality is. It’s like a basketball team, not every player can play in every position.

“We’re designing for strong and sharp and active women, not sexual, more sensual. It’s emotional but never cute, or ruffley or girly. It
is about the woman of the future, the metropolitan woman.

“In China we cover all levels, all price points, we’re strong with the media and we have a lot of liquid projects, styling for TV series or celebrities. I think if anybody in this world has a chance to sell in China, they will. At this point if you’re not selling in China it’s because you don’t have the channel, or you’re not doing very well. For any luxury brand it’s one of the major markets and will continue to be.”

To that end, Ma will have around 100 stores operating by the end of next year, with plans to raise more capital for further expansion. If all goes according to plan, she will be the only China-born designer with a nationwide collection of stores and a high-profile presence in the upscale department stores in other parts of the world.

She says: “As an entrepreneur, you need to be determined – if you want something badly enough you will get it, you figure out a way. I’ve made a zillion mistakes and will probably make a zillion more but I think progress is made by making mistakes.

“You only lose when you stop doing it. I would say the biggest mistake I made was listening to too many people and not the right ones. It takes a lot of determination to get into the fashion industry; for me, I’m not capable of doing anything else and I always want to go forward.”

That surging momentum will be significantly propelled by using social media as a main marketing tool. There are few people more adept than Ma at utilising the various platforms to push her brand, the #halffacecovergirl campaign being a prime example, or @mashamainsta on Instagram.

Yet despite her outgoing personality, eloquent, rapid-fire speech and willingness to ham it up, there’s one occasion when Ma is genuinely reluctant to step into the spotlight. The tradition at
Paris Fashion Week is for the designer to come out after the show to take a bow: John Galliano famously emerged from backstage dressed as an astronaut, a cowboy or a navvy.

China’s most visible designer at the City of Light – happy to swan around at all the best parties with her highly visible look of floppy fringe, multiple earrings, back tattoo and thick black specs – has to be pushed on to the catwalk.

“I hate taking the bow at the end; if I could get out of it, I would,” she says. “It’s not about being shy. I’m not so interested in taking the credit for everything because it’s a team effort.”