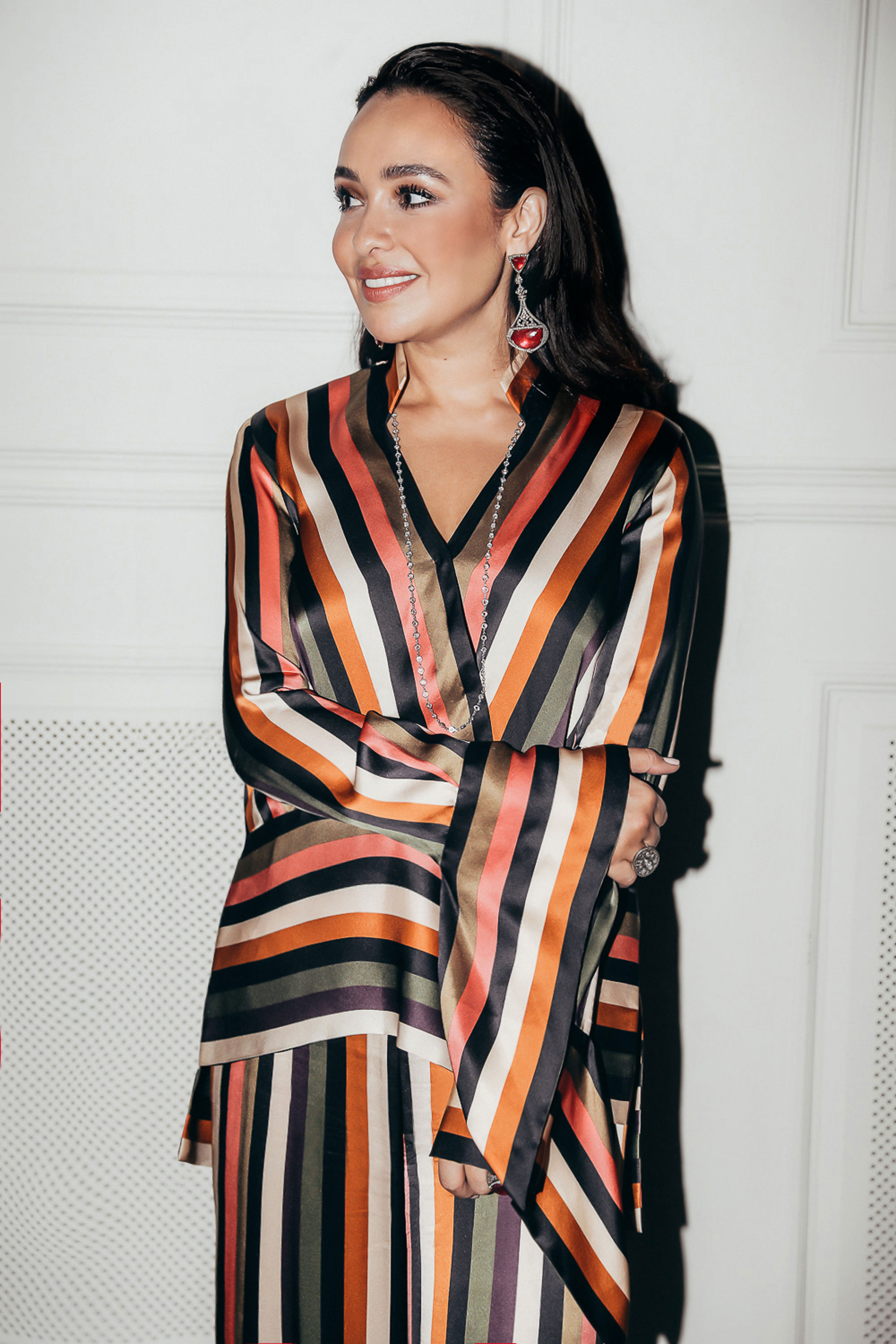 Ghizlan Guenez would be the first to tell you that modesty is often boring, dull and dowdy: “Super-cool, trendy fashion is not the first thing that comes to mind,” she says. But she’s also on a mission to change that with her new e-commerce venture The Modist, launched globally in March this year.

Spurred by her lifelong frustration – and that of the women around her – with the dearth of sartorial options in retail that are at once fashionable and modest, the former private-equity investor began building what has now been deemed the Net-a-Porter of modest fashion. Sole investor and CEO, Guenez is focusing her efforts on catering to this niche and in the process increase the visibility of modest fashion and to broaden its associations.

“The vision is to create a platform for the modest dresser that understands her needs entirely,” she says. “Often, the few propositions out there that have done modesty either do it with a religious direction or in a manner that doesn’t necessarily have a strong fashion point of view.”

Regardless of whether or not existing offerings are fashion-forward, however, it’s undeniable that Guenez has come into the market at an opportune time. According to a recent report on the global Islamic economy, total demand for modest dress is estimated to be worth US$327 billion by 2020. And though The Modist by no means caters solely to religious customers – its second-largest market is the United States, for which the data indicates that few shoppers make purchases from an Islamic perspective – the Muslim market is a veritable goldmine.

Just this year, Vogue Arabia launched its first print issue and London held its inaugural modest fashion week, while behemoths such as DKNY, Mango and Uniqlo – and even luxury brands like Dolce & Gabbana and Oscar de la Renta – are exploring modest options for the demographic.

Headquartered in Dubai and with a satellite office in London, The Modist has fused together a unique combination of modesty and fashion. Sasha Sarokin, its buyer and fashion director, laughs as she recalls her limited notion of the concept of modesty when first approached by Guenez in early 2016 to join the enterprise.

“At the time I didn’t know what modesty was really,” she says, “which says something about how much opportunity there is in the industry to bridge the gap between our concept of modesty and the general public’s understanding. I thought it was a Sex and the City moment, when women reveal their fabulous little outfits beneath their abaya. But that’s not our vision of modesty.”

Guenez is quick to agree. “There’s no denying that a big segment of the women who dress modestly do so for religious reasons,” she says. “And they do that across religions, not just Muslim women. The reality is that women dress modestly for so many different reasons.

“You have women who are older, who feel that it is more age-appropriate and chic to dress modestly. You also have women in professional fields who can’t show too much, but want to wear something beautiful and fresh and not necessarily be clothed in an all-dark formal suit. The reasons we keep hearing from women who like to dress modestly are truly endless and it’s been validated in what we’ve been seeing from customers who come and buy from us.”

It’s this diversity within the spectrum of modest dress that The Modist wishes to cater to and celebrate. “Our vision of modesty,” says Sarokin, “is the fabulous fashion itself and the product, style and lifestyle that we offer. The Modist is not about having the little dress beneath the covered serious dark piece, it’s the style itself that happens to be covering your skin in a way that feels relevant to you.”

Styling is a fundamental pillar of The Modist’s mission. Guenez recalls the six months she spent after quitting her former job, when she held focus groups to understand the specific tastes and needs of her customer. “We had focus groups with a variety of women who dress modestly and you’d ask two women about the same look and one woman would think that it’s extremely modest and the other would take issue that the colour of the outfit was too attractive and sexy, despite the fact that it’s entirely covered up.”

Because the parameters are so broad and subjective, it falls on the platform to inspire women to make sense of each piece, “We work around the parameters of long hemlines, long sleeves and opaque fabrics, but we also exercise a lot of sensibility,” says Guenez.

“For example, we look at the piece and we think, ‘It’s covered but it’s body con.’ Unless we’re styling it in a way that makes it modest, it’s not going to make sense. Sometimes we do pick pieces that are not necessarily modest, like a bustier, and we style it over a shirt but it has to do so in a way that makes the piece an inspirational styling element as opposed to trying to create a loophole to wear a piece that isn’t modest.”

Thus, customers can enjoy trends such as the one-shoulder top, which are often bought from the website as part of a head-to-toe look. “There are many styles you wouldn’t imagine as modest,” says Sarokin, “because they’re sleeveless or they’ve got some exposure in there, but the way we envision them in the showrooms of the designers is where we have a point of difference.”

Offering monthly guidance to the customer on The Modist site is The Mod magazine. Guenez was adamant from the start about fusing content and commerce.

“Modesty is not necessarily known as an idea or segment or an industry,” she says. “It was very important for us to create strong content that showcases our vision and our view of what modesty is, as well as to inspire our woman, whether it be through the styling or the editorial.”

Crucially, the magazine works as a formidable tool to empower women. It features personalities such as Caroline Issa and Yasmin le Bon, and all styled by Sally Matthews, The Modist’s creative director.

“The women we showcase in the magazine are not necessarily what we call ‘squarely modest dressers’,” says Guenez. “Often it’s women of substance and women that we feel align with The Modist. It’s not purely aesthetic. It’s about deriving a sense of empowerment from the woman that we feature and celebrating her.”

Ultimately, Guenez says, “You don’t define modesty. You find your space within it.” And The Modist is expanding the space in which modest dressers can experiment.

It helps that the brand has a London office to keep it in lockstep with every quiver and quake in fashion. Indeed, says Sarokin, “London is the leading fashion city (out of Paris, Milan, New York and London) right now,” she reasons. “It has the most emerging talent in terms of designers, it’s the leading fashion-tech destination in the world – Net-a-Porter, Farfetch, Matches and Lyst are all based there, so it’s become the de facto epicentre of fashion-tech as well. Of course our brand selection is organically aligned with cities across the globe, but we’re strategically placed to be at the centre of both the design element and the fashion-tech element.”

Poised and primed to reinvent the global attitude towards modest dress, Guenez and her hand-selected management team of four women – all veterans in the fashion-tech industry – are spearheading the charge. “We know our woman,” she explains. “She is who we’re speaking to and she is what we’re going to continue to focus on.

“This is our niche, but this woman is everywhere. She’s in Asia, she’s in Europe, and she’s in America, the Middle East and even Africa.”