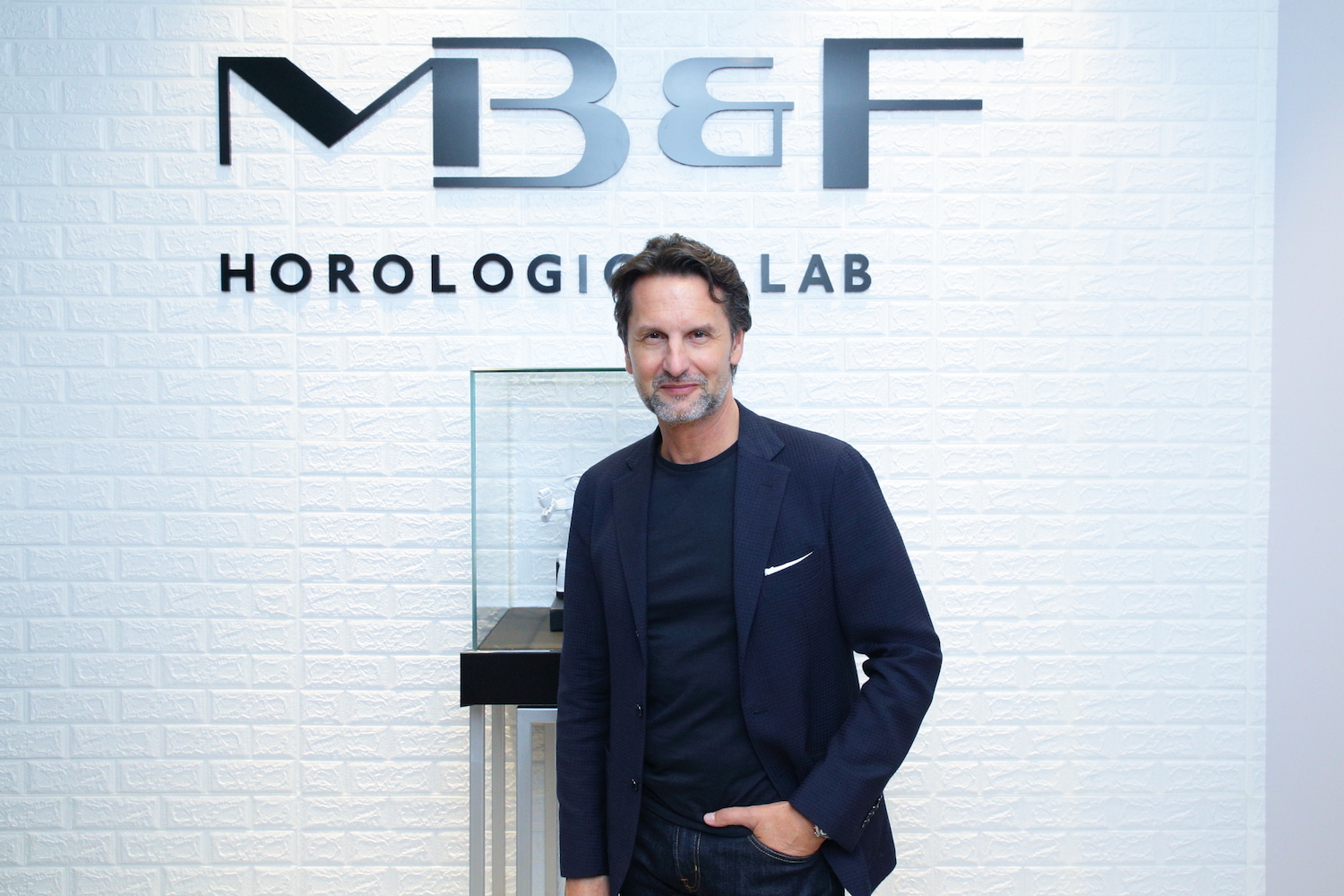 When it comes to haute horlogerie, you know we love the classics. Yet, there’s just something fascinating — so inspiring, really — about what independent brands like Max Büsser and Friends (MB&F) set out to do, and what they mean to the watchmaking scene. Existing against all odds in what’s really a completely different world from large, branded institutions, they may not be everyone’s cup of tea, but for those who truly appreciate the art and craftsmanship behind a luxury timepiece, these brands hold a very special place in their hearts.

On this particular day, we were enjoying pastries at a cafe by PMT The Hour Glass, when Maximilian Büsser — the CEO and Chief Creative Officer of MB&F himself — enters the room, all smiles and congeniality. He kicks off our exclusive interview by brandishing the reason we’re there — the newly unveiled MB&F Legacy Machine Thunderdome. And, let us tell you this, it really is a sight to behold.

With hours and minutes displayed slanted, on a dial of white lacquer, the Thunderdome’s tour de force comes in the shape of a three-axis tourbillon, elegantly contained by a thin layer of domed sapphire. As he motions for us to lean in and “look closely, because you won’t get to see a watch like this that often”, Büsser directs our attention to the speed at which these intricate mechanisms are rotating. He begins going into great detail about the difficulty in achieving such a result, before giving a cheeky smile, and apologising for “getting a little too geeky here” — though, truth be told, there are few things we love more than a watchmaker who’s passionate and knowledgeable about his craft. From what made him decide to create, well, this, to how he made it happen, here’s the story.

Could you tell us a bit about what you do?

At MB&F, we’re a creative lab where I have ideas, which would only stay ideas if I didn’t meet fantastic people along my life. That’s why it’s called Max Büsser and Friends — it’s these friends who transform my crazy ideas into reality. We set up the brand 14 years ago, and since then we’ve created 17 calibers, 17 different movements, and all with great people.

What’s so special about the LM Thunderdome?

Now, you see, this particular piece, the Thunderdome, brings together two of the greatest watchmakers in the world today. One, who I’ve been working with for 11 years, is Kari Voutilainen, and he’s arguably one of the greatest classic watchmakers alive. And then I brought someone else to the table who is completely insane, who I’ve known for 28 years, and that’s Eric Coudray. We’ve always said one day we would work together, and it took a 24 year wait for him to finally be free to be able to do something with me.

24 years is a pretty long wait — how did this come about?

When I was working my first job in watchmaking 28 years ago, as a product manager at Jaeger-LeCoultre, Eric was this young watchmaker at the prototyping department, and he was already completely nuts, and incredibly talented. He’s probably one of the only watchmakers in the last 100 years who has created a new complication. You know, all the complications we have in the watch scene are the same as what they were 150 to 250 years ago — you have the perpetual calendar and so on. This man invented the first multi-axis escapement, which came out in 2005. It was the first time you had something turning in the heart of the watch, which is always flat. So I sat down with him four years ago, and I told him, “you’re nuts, let’s create the craziest escapement ever.” And I basically told him I would give him what nobody else would — first, a domed watch, and second, freedom.

How was the result of this partnership?

What we ended up with is basically a story of my idea, Eric Coudray, and Kari Voutilainen. They’d never worked together, but the three of us gathered around a table and started a plan. Now four years later, we have a piece designed from the back by Kari, this extraordinary classical watchmaker. This is watchmaking to a level which you very rarely in life get to see. The design is very much of a pocket watch from the 1830s or 1840s, and the finishing is insane. All the inner angles are angled by hand, which no one does anymore. And then, on top of that, you’ve got the craziness of Eric, so you’ve got the thunderdome. It’s this insane sphere, and there are multiple world premiers. It’s the biggest, fastest, tri-axis three-cage escapement in history. You’re not going to see that everyday — balance wheels for the past 600 years have always been flat, and this is the first one that’s a sphere.

That’s one crazy watch. What was the hardest part about creating it?

Here’s the thing. Four years of development, 423 components, and this whole sphere that you see turning weighs less than a gram. The difficulty is that we made it the biggest and the fastest. Usually if you want to go fast, you go small — if you go big, then you go slow. Here we go big, and we go fast, so every single part has to be machined out of the lightest titanium, and made as thin as possible, to actually be able to turn. And you’ve still got three barrels to move all of it. Has this got a point? No, of course not. The point is to have this jaw-dropping kinetic sculpture on your wrist. That’s what I do, that’s what MB&F is about. This is the heart, you’ve got the craziest heart in the history of watchmaking.

How did you know that these two great people could work together?

I didn’t — had absolutely no idea. One of the things I’ve discovered after doing collaborations for 20 years is, if you want a collaboration to work, you need people who have the same values. And you need people to have the same objective. If one wants to make a great product, and the other one wants to make money, it’s never going to work. You need people who have the same honesty and enthusiasm, so Eric and Kari are so different, but on those two things they are exactly the same. And it works out, and it’s great to see both their names together for the first time in history.

Is there anything to look forward to especially with this watch?

We have this watch in a limited edition of 33, in platinum. But because our partner The Hourglass and PMT The Hour Glass is celebrating their 40th anniversary, they asked me to create a special piece for them. So, their piece is a bit different. The blue is darker, and the metal is not platinum, but Tantalum. Tantalum is an incredibly complex metal to machine — so complex that nobody except one brand ever uses it. The case is worth 3 times more than a platinum case, so there are 10 pieces in Tantalum for The Hour Glass and PMT The Hour Glass.

How are sales going?

We showed some of our VIPs the new piece before the official launch, and we already took half the production order. What we do is we work four years for that special day, and we make sure that on that special day there are no more products to be had. It’s a weird way of working that we’ve always done because I’m a self-financed company, I have never made a loss, I’ve got no debt, no shareholders, and I built all of this with my little savings 14 years ago. So the only way to make sure that the company continues, is to make sure that whenever we launch something, it’s sold out. Also, we don’t want to grow, which is something that has always amazed a lot of people. We’ve been maintaining the same revenue for the past 6 years.

You’re not looking to grow? Then what lies ahead?

The year my daughter was born, I decided that’s it. I’ve given my life to my work, now I’m going to give it only half of my life, the second half is for my family. We have a weird business model because I want to focus on happiness. The interesting part is I have no idea what lies ahead. I was just having this very interesting off the record with Khun Arun, it’s like so where’s the brand going, and I’m like “I don’t know”. I don’t know. If 14 years ago you told me I was going to do a round watch, I would have said never. If you told me I was going to do an Art Gallery, I would be like why would I do an art gallery, but now I have four art galleries. If you told me I was going to live in Dubai, I would think you’re crazy. But five years ago, with my family, we went to Dubai and we’ve been living in Dubai. I know that I don’t know, so I know what’s coming out as products in the next 5 years, but what am I going to create tomorrow? What am I going to decide tomorrow? I don’t know, that’s the cool part, and that makes tomorrow so appealing.Find out more about the MB&F Legacy Machine Thunderdome, and MB&F at thehourglass.com.

People & Events
By Alice Lin
Sign up to get the latest luxury and lifestyle news delivered to your inbox.
Mary Losmithgul
The online content creator for Prestige Thailand, Mary handles the magazine's digital platforms. She enjoys black coffee, astro charts and listening to entire albums in one go. When not engrossed in a novel or having brunch, catch her on the hunt for new restaurants and the city's latest happenings.
Society events travel property watches drinks